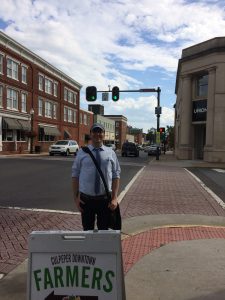 I dropped my daughter back at UVa yesterday, and took the opportunity to stop on my way back and canvass with Ben Hixon, who’s running for the Virginia House of Delegates district 30. I was especially curious to see how the events in Charlottesville this past weekend would affect what voters had to say at the doors, especially in an area like this where the residents are 42% minority.

While we walked, Ben explained a bit more about his positions–he’s a Democratic Libertarian, so that’s a new one for me. His views are best represented by FDR’s concept of four freedoms that people should enjoy: freedom of speech, freedom of worship, freedom from want, freedom from fear. We easily agreed on more than we disagreed on, which shouldn’t be surprising, and is why he’s on the Democratic ticket.

The tension felt palpable at many doors we knocked. Ben, who’s new to politics, introduced himself at every door, and asked the voters what issues were important to them, what concerns they might have. Many people were visibly hesitant, took a deep breath or two as if gearing up to let it all out, but then sighed, and said “nothing at this moment.”

But then, we found a man who hesitated, took that deep breath, and actually did let it all out. He talked about how terrible what happened in Charlottesville was, but it wasn’t clear which part of it he was concerned about. Then he said that he believed in personal freedom AND personal responsibility, and I started to sense which way this conversation was going to turn. Once he got going….well, Charlottesville was a law enforcement issue; his health care costs are sky high; if one single penny of his taxes go for an abortion, he has sinned against God; he believes in helping people who NEED help, but not people who CHOOSE to need help (?); he’s tired of working hard so that other people can feed off his taxes; he’s fine with LEGAL immigration, but we need to stop calling ILLEGAL immigration anything else, and we need to recognize it for what it is–a crime. There was more, but you get the picture.

We walked away from that door appalled, and walked to the next door on our list, two doors down.

The door was opened by a woman covered head to toe in a Muslim chador. She too took a deep breath and let it all out. She’s been stared at, given the finger to, cursed at, told to “go home,” called a “terrorist.” She’s afraid to leave the house alone, afraid to send her children to school (“if the teachers there give me dirty looks and say things to me, what are they going to do to my child?”). She talked about the recent fight in Culpeper over the county blocking a Muslim group from building a mosque. Ben’s opponent, sponsor of a so-called “religious freedom bill” in the General Assembly last year, apparently didn’t actually believe in religious freedom enough to attend the hearings on the mosque or speak out in favor of the mosque being built. The woman asked us “how can they teach the children `with liberty and justice for all’ in the schools, when it’s so dishonest?”

Two doors away, but an infinite chasm in between.