Check out below for photos and video (and, last but not least, the excellent the report by Joshua Vana) from the Virginia Department of Environmental Quality (DEQ) Hearing in Harrisonburg on the Atlantic Coast Pipeline. Clearly, the room was packed, and I’m told it was overwhelmingly (e.g, something like 117 our of 130 speakers; a huge percentage of the >500 people in attendance) anti-pipeline. According to anti-pipelines activist Lee Stewart: “Cheers erupting over objections from DEQ officials. Powerful statements as folks speak their hearts and souls in protection of the people and places they love. Over 100 speakers slated to make comments beyond 10 pm.” Note that this coverage is far more accurate than the absurd “both sides,” false equivalency of the corporate media (like this disgraceful example of “fair and balanced” pseudo-“journalism”), which acted as if there were two equal “sides” there last night, “supporters” and “opponents” (the corporate media loves false equivalency and simplistic, brain-dead, lazy “reporting”). Thanks to everyone who attended last night and who is fighting Dominion’s proposed pipeline monstrosities. Keep up the great work, and let’s stop these damn things! 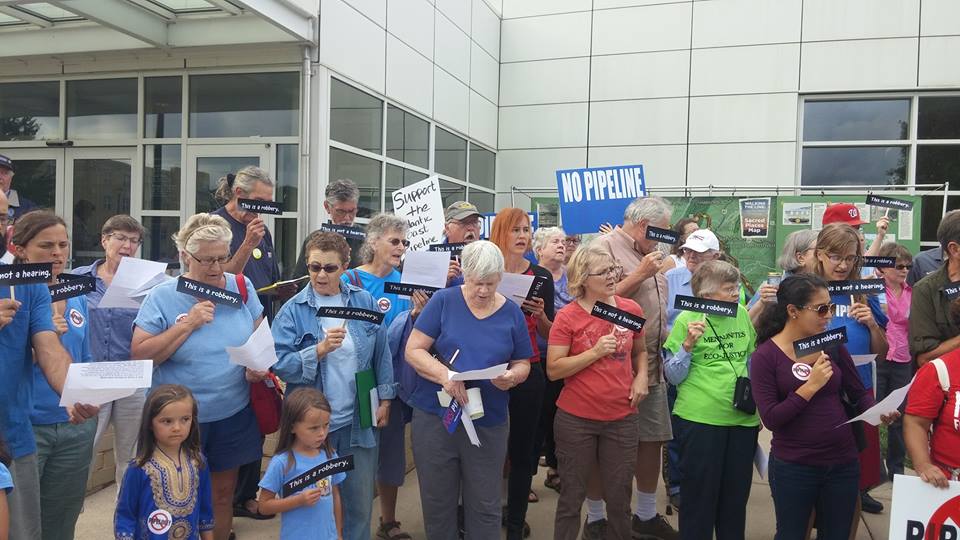 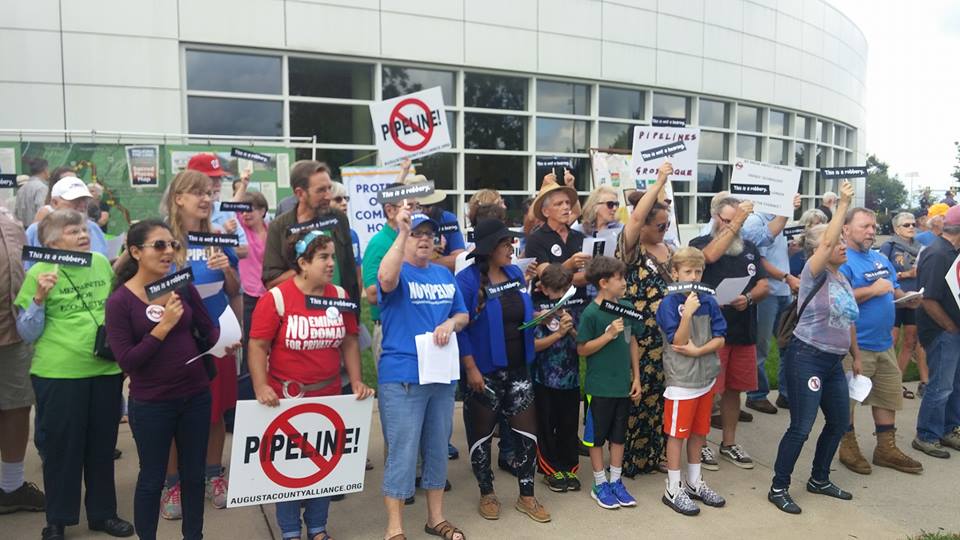 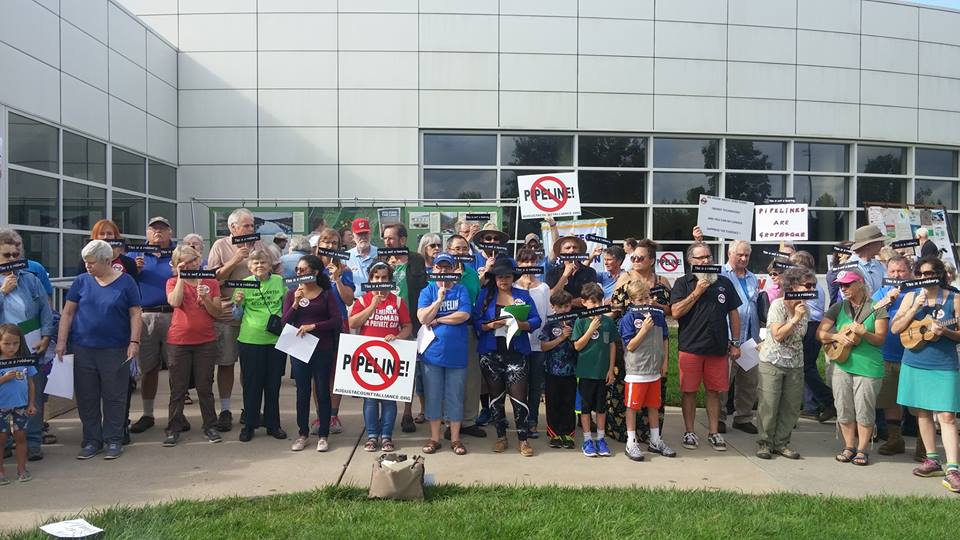 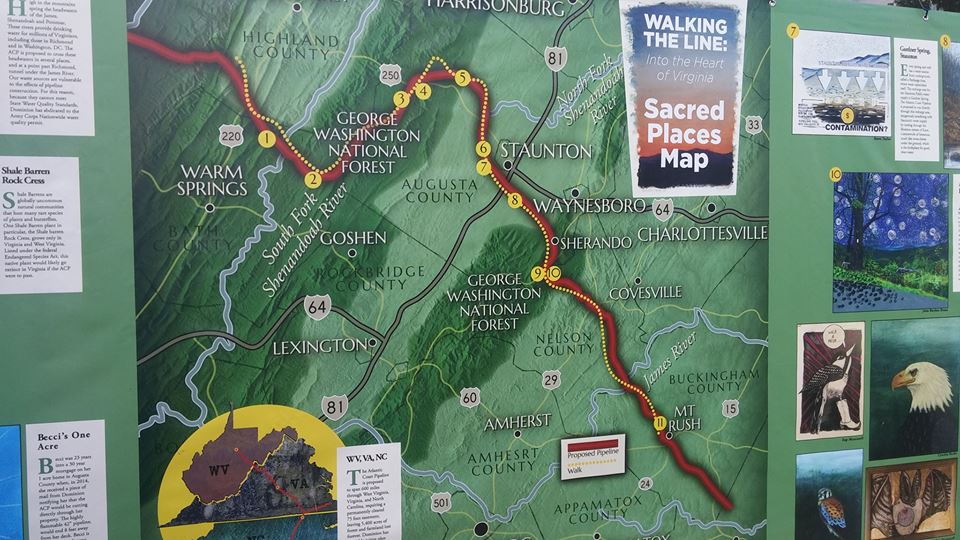 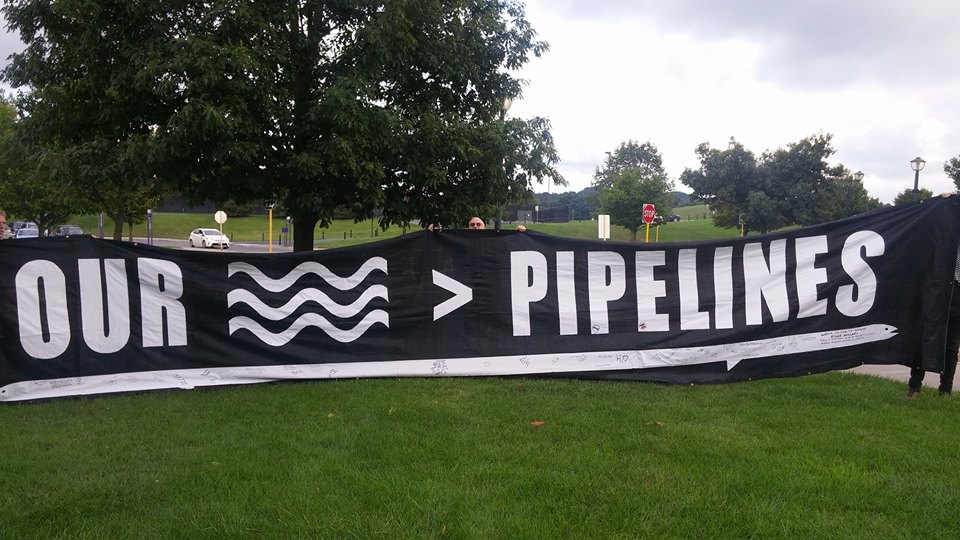 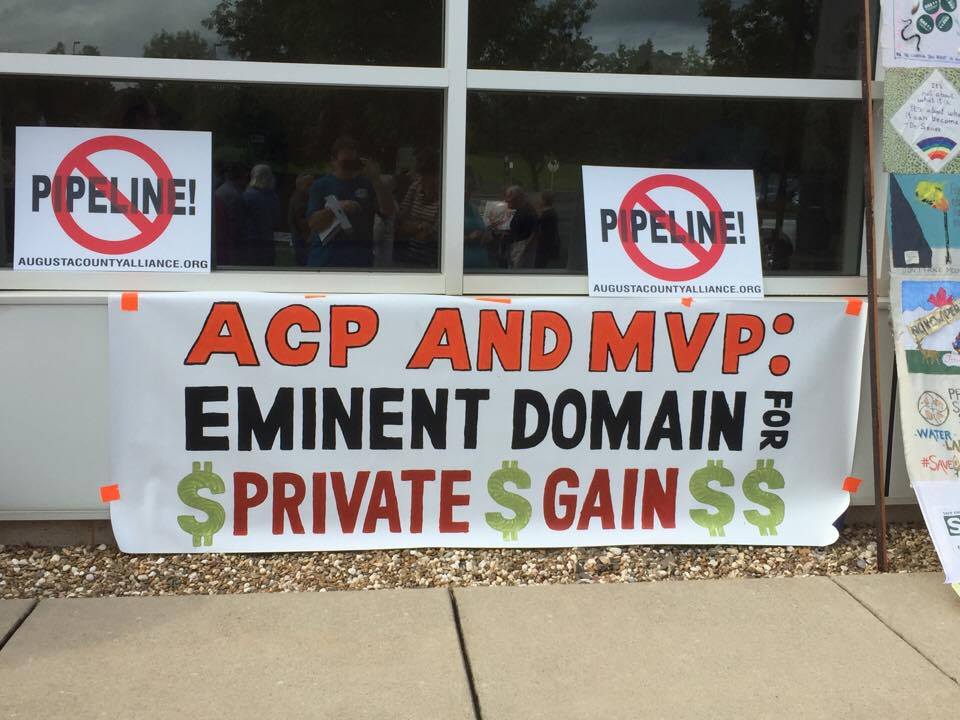 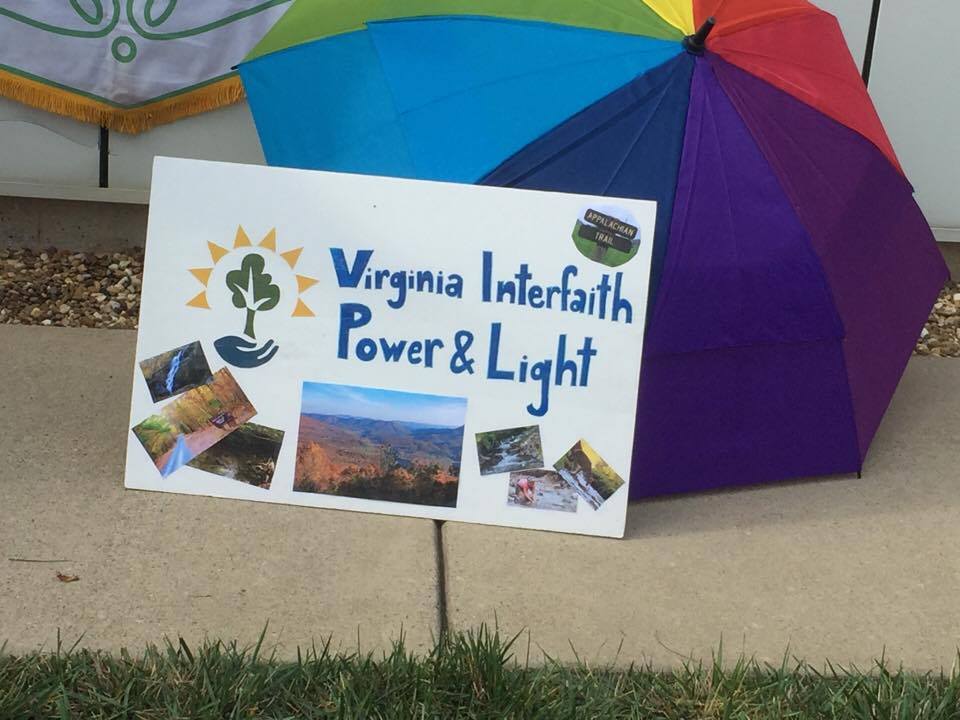 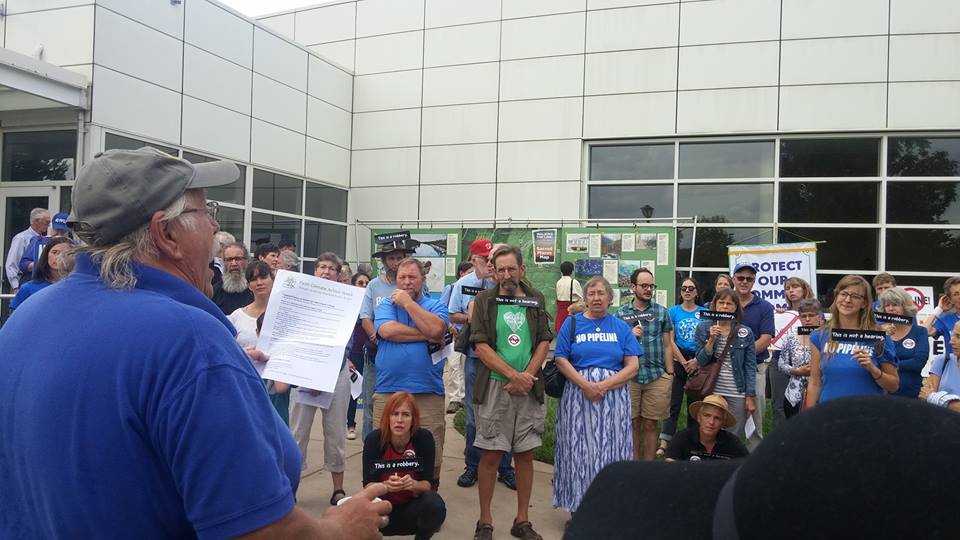 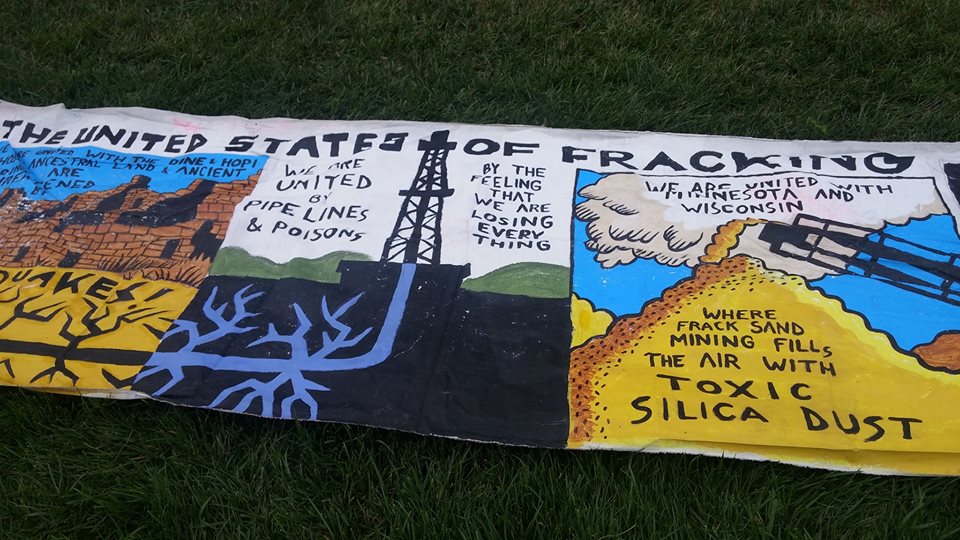 Tonight Harrisonburg and Rockingham County folks showed up in support of clean drinking water across several major watersheds, in support of our Allegheny and Blue Ridge mountains, and in support of frontline communities across the Commonwealth who have been fighting tirelessly for years, staring down the Goliath of greed, the ever-encroaching machinery of blind destruction, and the split tongue of the black snake – in this case the proposed Atlantic Coast Pipeline.

It was powerful to watch friends stand and speak in solidarity with folks who had come from Bath County, Nelson, Augusta, even Hampton Roads. More friends came from Albemarle and Loudon, not to mention folks fighting the MVP in their backyards. It was a packed room, much of which was blue. Affected landowners, concerned citizens, water quality experts and former energy industry professionals, people running for public office – as well a bunch of good folks who just give a damn – spoke from their hearts, with fire, and let the DEQ know exactly where we stand, and asked them (told them) to do their jobs in protecting our water in Virginia.

Cheers were frequent, to the annoyance of DEQ, though “order” was still kept as we rolled through about ninety comments lasting up to three minutes each. For four hours straight the voices overwhelmingly said, “NO PIPELINE”. I found myself pumping my fist at every hard-hitting point, whooping when friends finished their piece, and riding a wave of adrenaline when folks like Lee M White landed lightning bolts in front of the four DEQ staffers. I imagined walking up and flipping their table over as if to say, “What more do you need to hear?” When the hearing closed down, we still had dozens of folks wanting to make their objections to DEQ’s shortcutting heard, willing to stay longer to speak.

The Dominion plants were there too, but their sauce was weak and they left early. Truth was louder tonight and stayed until the end.

This process – DEQ’s hearings on the ACP and MVP – are a sham, scheduled only to give lip service to their obligation to hear and document public comments, but tonight it felt like we ripped it up and tossed it back at their feet. “Do your jobs” was spoken loud and clear.

Thanks to all the Friendly City and Rockingham folks who made it out, and thanks to Appalachian Voices, Wild Virginia, Walking the Line: Into the Heart of Virginia, Friends Of Augusta, Friends of Nelson, Augusta County Alliance, Dominion Pipeline Monitoring Coalition, and others for organizing and coordinating. In addition, thanks to my Raptors VA pals for representing our part of the Valley.

Now onto the next hearings for the ACP and MVP – Radford, Chatham, Farmville, Alberta, and MVP meetings in Newport and Cave Spring. Trying to make as many as possible. Holler if you wanna try and carpool. We really need folks to show up.

If you also want to help us tell the DEQ to fulfill their constitutionally mandated responsibilities to protect our water, their public comment period for written and online comments concerning both the proposed ACP and MVP is open until August 22nd.

Water is life, simple as that.

Thanks Lee Stewart for the photo, all the way from NOVA this evening.