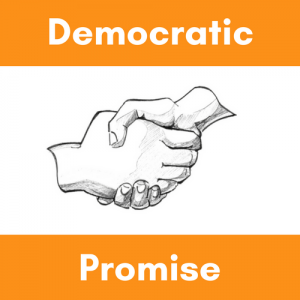 Since last year, we as Democrats have been asked to look in the mirror and begin the process of reflecting on who we are, what we stand for, and who we’re really fighting for. A narrative that came out of the Democratic Primary – one that has been brought over to this year – is that our party in some regards has become indistinguishable from the Republicans, and that we’re actually just two sides of the same coin.

I’m keenly aware that many who may read this are already beginning to feel their blood pressure rise. I know that the occupant of the White House, his supporters, and the Republicans who continue to tolerate him, have all drawn a stark contrast between themselves and what the Democrats would be doing right now had we won in 2016.

But indulge me for a moment and give into what folks always accuse us of doing too much of – empathizing.

There is a large population of Americans out there that have not seen their standard of living improve in well over a decade. They have not seen their opportunity for success change in any substantial way, and while many of the bold laws and bargains we’ve struck as a party over the last eight years have improved their lives, all we have really done is save them from death and financial ruination in the short term. We shouldn’t be given a gold star for common decency… even if the other side tends to lack it at times.

We’ve gotten a lot of folks healthcare, but there are still so many that don’t know how to purchase it, or they still fall into the abyss because we haven’t expanded Medicaid. We’ve created a New Virginia Economy with tons of new jobs, but many of them sit unfilled and we have unemployed folks that can’t access them. We’re fighting to end gerrymandering and voter suppression now, but we were willing accomplices in the 2011 maps that disenfranchised so many, and we also did very little to expand voting rights in a substantial way when we did have more control in Richmond.

We’ve let the conservative elements of our state suppress the labor movement, and keep our criminal justice system tethered to its roots in slavery and Jim Crow. We’re only now starting to have real conversations about Confederate statues despite communities of color trying to raise debate about them for nearly a century.

I’ve been to several doors of several voters who have told me straight up that they don’t see much reason to vote. In speaking to them, they definitely believe in equality, opportunity, justice and everything else we believe as Democrats, but they have told me that most of the elected officials they’ve come into contact with have not kept their promises. They’ve seen the “Virginia Way” turn into agreements and compromises at the top levels of leadership that don’t actually move the ball forward for folks on the ground.

For every triumph, we’ve also given folks a reason to distrust us. We’ve become the champions of providing government services to equalize the systemic inequities in our society, but we haven’t really done a good job about packaging those services in a way that folks can get their arms around. The Republicans have done a bang-up job of demonizing government to their base, and we really haven’t done an equally bang-up job dispelling those lies and showing folks that government can be a good thing.

That’s where the newly-minted Democratic Promise comes in. Delegate Sam Rasoul and his team have come up with a real way to actually connect citizens to some of the great programs we have here in Virginia (both provided by the state and through the federal government.) It’s one thing to tout the accomplishments we’ve made over the past few years, but Democratic Promise seeks to finally bridge the disconnect between those accomplishments and the real people they’re designed to help.

Steps to Fulfilling Our Promise:

1. Using volunteers, we reach out to people to see if they have any concerns or issues that we can help address.

2. We assign a staff community worker to help one-on-one with the person and problem solve.

3. The community worker will identify resources from community partners, local, state, and federal entities to help solve the person’s problem.

Ways We Can Help:

In one stroke, this connects grassroots activism to professional community workers to real world programs that can help improve people’s lives. I challenge you to find a more emblematic process for the Democratic Party.

And here’s the thing between the lines – if someone needs help and there isn’t currently a service for it, that means there’s a demand for that service. If there are multiple folks that need that same service, it quickly becomes clear that we as a commonwealth are not fulfilling something that is needed. That’s vital information that helps us as Democrats actually become advocates for the needs of real working people and gives us a winning message to take to the battlegrounds of power.

The end goal of this project is to help people, and to ensure that our fellow Virginians are actually aware and utilizing services that can improve their lives. Along the way, we’ll begin to restore trust in our party, and really showcase that government can be a good thing in the right hands.

We want to build a Virginia that works for everyone, and build on our previous victories to continue pushing the ball forward. This is exactly how we do it regardless of the campaign cycle.