The irony of neo-Confederate Corey Stewart, a native of Minnesota and a fan of the (supposedly) heroic Southern “Lost Cause” and other such revisionist garbage, telling UVA students that THEY are “historically illiterate,” is rich. Also note that Stewart is currently the leading/only Virginia Republican candidate for US Senate next year against Sen. Tim Kaine. That tells us a great deal – none of it good! – about the state of the Virginia GOP right now, huh?  Oh, one more point: Stewart keeps referring to the “violent left,” but in the case of the protest yesterday at UVA, in which Thomas Jefferson’s statue was covered with a tarp, whether or not you agree with that action, it was 100% peaceful/non-violent. So no clue (as usual) what Corey’s ranting and raving about… 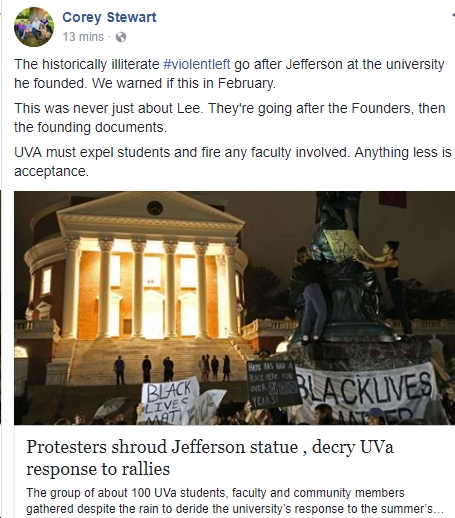