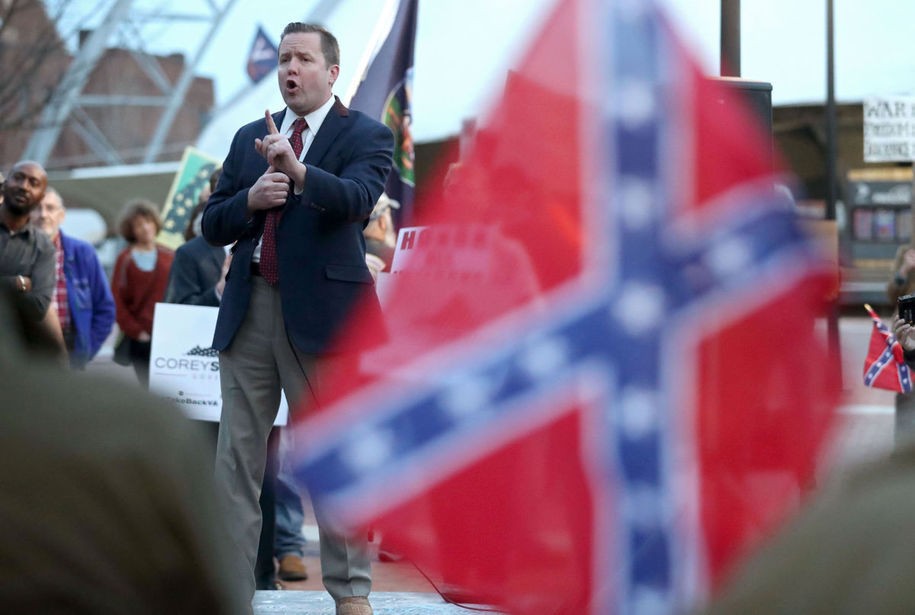 Despite being just the chairman of the Prince William County Board, Corey Stewart is known far beyond the borders of Virginia. Last year, he proclaimed himself “Trump before Trump was Trump” and Trumped so hard that Trump Trumped him from being campaign chair of our Commonwealth.

He wasn’t lying about being “Trump before Trump was Trump,” either.

One of the key players highlighted in the documentary 9500 Liberty, Stewart spearheaded a series of racially-charged initiatives designed to terrorize communities of color in our county… and he succeeded. A large segment of our Latino immigrant population — most of which were documented, mind you — packed up and moved out as a result of the hateful rhetoric and xenophobic policies spewed out by Stewart and his comrades.

This year, Stewart came terrifyingly close to becoming the GOP nominee for Virginia governor, losing by less than 1% to Ed Gillespie. The margin of victory wasn’t the actual terrifying part, though, it’s the fact that he came that close while running an overtly Neo-Confederate-friendly campaign.

How does all of this connect to Charlottesville? Well, in February, he organized a rally centered around protecting Confederate statues and the “heritage” they represent. During his time down there, Stewart encouraged and literally embraced white supremacist Jason Kessler, who went on to become one of the chief organizers of this past weekend’s “Unite The Right” Hate Rally.

In short, even if Stewart didn’t directly organize the atrocities of this past weekend, he help build the foundation for it. Worse yet, he put out two videos this week pulling a Trump — victim-blaming liberals for the violence and saying that there were “many sides” at fault.

Most folks you talk to in Prince William County nowadays — both Democrats and Republicans — are sick of being embarrassed by Corey’s antics. Now he seeks to challenge Tim Kaine for Senate, but it’s time we took him down a peg… or several hundred.

Last night, the Occoquan Democratic Committee (a sub-group of the Prince William County Democratic Committee) passed a resolution condemning the atrocities in Charlottsville, the white supremacist terrorists who orchestrated them, and calls upon our elected officials to act. Similar to resolution recently passed by the Illinois State Senate, our resolution seeks to put pressure on local officials to call what happened in Charlottesville for what it is — domestic terrorism.

It also goes on to call upon our state legislature to instruct law enforcement to label the Neo-Nazis, Neo-Confederates, Klansmen, and other white supremacist groups as terrorist organizations, and engage with them accordingly. We also urge our county officials to work with state officials and law enforcement to devote resources toward combating these hate groups and educating the public about the threat they pose.

With luck and a bit of work, the hope is that our county committee passes a similar (if not an identical) resolution, which we can use to put pressure on Stewart and has band of Neo-Confederates. We could also begin working with neighboring counties to pass similar resolutions, the ultimate goal being a regional or even state resolution by the party.

Corey is only so powerful because we as Democrats couldn’t take him out of power in 2015. We own that, and we’re not waiting until 2018 or 2019 to do something about it. We’re making him answer for what he’s done here and now.

Here’s the full text of our resolution, passed as amended:

Whereas The General Assembly of the Commonwealth of Virginia is charged with enacting laws for the protection and betterment of all Virginians;

Whereas the government of Prince William County is charged with the protection and well being of all its inhabitants;

Whereas the recent events in Charlottesville, Virginia, indicate an increase in white nationalist, neo-Nazi, neo-Confederate, Ku Klux Klan and other white supremacist activity;

Whereas these activities and their supporters promote ideas and actions which are contrary to the spirit and ethos of our nation and which threaten to divide rather than unite;

Whereas these groups and their activities pose a threat to the lives and property of all Virginians, pose a threat to Public Safety and most importantly pose a threat to communities living in peace and harmony regardless of race, creed, color, sexual orientation, or national origin.

Therefore be It Resolved, that the Occoquan District Democratic Committee (ODDC):

UPDATE: The Prince William branch of the NAACP issued the following press release today, with remarks from our unit president Rev. Cozy Bailey:

Prince William County, VA – The Prince William Chapter of the National Association for the Advancement of Colored People (PWNAACP) released the following statement condemning the rally uniting Alt-Right and White Supremacy groups and the statements of the Chairman of the Prince William Board of Supervisors:

The Prince William NAACP unequivocally denounces the rallies in Charlottesville promoting hate, racism, bigotry and xenophobia. And we stand in solidarity with the groups who peacefully opposed those who carried guns, confederate flags and waved swastika as they marched onto the grounds of the University of Virginia in an effort to intimidate and divide our Commonwealth.
We will hold a press conference on the steps of the McCoart Building on Monday, August 21 at 1 pm.
The PWNAACP sends our condolences to the families of those lost on Saturday and we wish a speedy recovery to those injured.
We say strongly to the groups that came to Charlottesville to protest the planned removal of a statue of a confederate general, It is time to put away the status symbols that glorify our country’s disgraceful legacy of slavery and racism.
“We must embrace inclusion and celebrate our diversity,” said Rev. Cozy Bailey, PWNAACP President. A message of tacit support has come from the Chairman of the Prince William Board of County Supervisors,” said Bailey. “We find it reprehensible. Mr. Stewart has an irrefutable track record of vitriolic rhetoric intended to fan the flames of racism that, unfortunately, still burn in many,” he said.
We call on the members of the Board to repudiate Stewart’s actions. His hate must end. We cannot leave this country in the hands of those that would attack members of the clergy and men who would willfully strike women in the streets. The PWNAACP knows that despite the twisted explanations coming from the White House, there is no moral equivalency between those who incite hate and those who fight hate. We must be vigilant against hostility and intolerance in order to create a more perfect union.
###