As always, Donald Trump is a disgrace to America and to humanity. The latest? Check this out — Trump attacking the Mayor of San Juan, Puerto Rico (pictured below), who is literally fighting for the lives of her people as Trump lounges on his fat a** at one of his golf courses in New Jersey. Want to get even angrier? Check out Lost weekend: How Trump’s time at his golf club hurt the response to Maria, which reports on Trump’s callous indifference, incompetence, blame-shifting and other sociopathic behaviors with regard to the disaster in Puerto Rico. Finally, check out the statement by Rep. Donald McEachin (D-VA04), which begins: “This morning’s tweets were disappointing, insensitive and unhelpful to say the least. As the people of Puerto Rico despair of having the most basic of life’s needs – food, water and shelter, our President, and their president, I might add, chooses to attack the mayor rather than invest in meaningful solutions to the ever-mounting problems there.”

Oh yeah, just a reminder that VA GOP gubernatorial nominee Ed Gillespie has said repeatedly that he’d welcome Donald Trump to come and campaign for him here in Virginia. Does that say it all about soulless, amoral, gutless Gillespie or what? 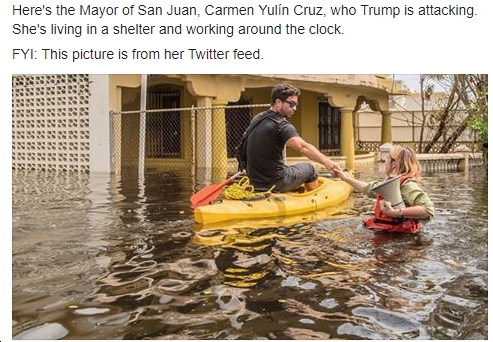 Congressman A. Donald McEachin (VA-04) issued this statement in response to President Trump’s tweetstorm directed at the mayor of San Juan, Puerto Rico:

“This morning’s tweets were disappointing, insensitive and unhelpful to say the least. As the people of Puerto Rico despair of having the most basic of life’s needs – food, water and shelter, our President, and their president, I might add, chooses to attack the mayor rather than invest in meaningful solutions to the ever-mounting problems there.

“Today’s tweets were just the latest in a pattern that speaks to excuses and diversions, rather than solutions. He speaks bombastically of his ability to destroy far off North Korea, but then claimed that he can’t get better aid to Puerto Rico because we are separated by an ocean.

“This morning, rather than acknowledge that Puerto Ricans are in dire need and that, ever day on our tv screens, we are seeing scenes of horrific devastation and suffering, he attacks the mayor in personal terms and accuses her of partisan politics. Mr. President, when it comes to needless partisan attacks as a diversion, look in the mirror.

“As the president careens from complimenting himself and his administration on their response to Puerto Rico to bombastic insults directed at San Juan’s mayor, Mayor Yulin Cruz continues to make every effort to help her community recover.

“I call on the president to remember that disasters are not Democratic or Republican, that Puerto Ricans are American citizens and that when we see people in need and suffering, our responsibility and history as Americans is to go to their aid, relieve the suffering and leave partisan politics behind.” 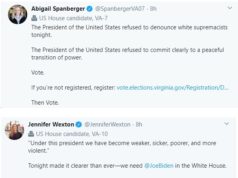 Just do the polar opposite of whatever the far-right "Middle Resolution" PAC recommends...including voting for Joe Biden/Kamala Harris, Mark Warner, the Dem for US House, and NO on Amendment 1. https://bluevirginia.us/2020/10/thursday-news-moderna-ceo-says-its-coronavirus-vaccine-wont-be-ready-until-spring-of-next-year-trump-backs-violent-white-supremacists-theres-no-way-around-it-the-family-is-wo#comment-5092638410

As of 9/30, Virginians had cast nearly 1/2 a million votes already! (285,805 in person; 196,869 by mail). The "blue" 8th, 10th, & 11th CDs remain way in front in "mail and in-person ballots cast so far, as well as outstanding mail ballot applications." https://bluevirginia.us/2020/10/thursday-news-moderna-ceo-says-its-coronavirus-vaccine-wont-be-ready-until-spring-of-next-year-trump-backs-violent-white-supremacists-theres-no-way-around-it-the-family-is-wo#comment-5092635437