This image of a gleeful Ralph Northam juxtaposed with a shimmering pipeline was a bit startling – to say the least – for some residents of Southwest Virginia. The digital ad, paid for by State Solutions Inc., has been sighted again and again since as early as August 18th. The intention is clear: suppress the Democratic vote in areas affected by the proposed pipelines.

Who is State Solutions, Inc.?

State Solutions, Inc. is a nonprofit affiliate of the Republican Governors Association. It’s been active for years in the shady shell games of independent expenditures, usually involving mailers and digital ads attacking Democrats and supporting Republicans.

From Citizens for Responsibility and Ethics in Washington:

“State Solutions doesn’t appear to have done much other than pass money to other organizations in 2014. Regarding the $290,000 given to A Public Voice, the RGA may have been the ultimate source of that money. The governors group reported giving $300,000 in February 2014 to Make Ohio Great, which is the name by which State Solutions was previously known.

It is possible, however, that the money State Solutions provided to A Public Voice wasn’t tied to the voter shaming project. A Public Voice, along with another group funded by State Solutions called Citizens for a Sound Government, worked with the RGA to fund an independent expenditure committee that ran ads attacking Connecticut Gov. Dan Malloy (D) before the 2014 election. A Public Voice gave $1.17 million to the attack group while Citizens for a Sound Government gave $685,000.”

In addition to Virginia, State Solutions has gotten involved in the run up to the 2018 Illinois gubernatorial. From the Chicago Tribune:

“An affiliate of the Republican Governors Association has gone up with TV ads on broadcast and cable to promote Gov. Rauner and his agenda in the state’s historic budget impasse.”

“State Solutions Inc., a nonprofit group formed by the RGA, has purchased both 15- and 30- second spots that each prominently feature one item: duct tape.”

“Industry documents showed State Solutions spent nearly $40,000 to air 194 spots on Chicago and central Illinois cable and satellite on Fox News and CNN. There was no indication how much the group was spending on broadcast TV in early forms filed with stations in Chicago.”

And they’re also involved in the run up to the 2018 Rhode Island gubernatorial. From Providence Journal:

“A day or so before the first DGA ad aired in March, an affiliate of the Republican Governors Association posted a digital attack ad that served notice that it, too, has an eye on Raimondo.

“Raimondo on jobs — all talk, no action. Due to her lack of leadership, Rhode Island ranks as the worst state in America for business and has a declining workforce. Call Gina Raimondo and tell her to support policies that help Rhode Island.”

“Tell Ralph Northam to keep supporting our pipelines.” This is misleading in that Northam still resides in the realm of neither supporting nor opposing the pipelines, pending regulatory evaluation. But the point is pretty clear – Ralph’s position is a de facto acceptance of the inevitability of the projects, and the ads want to emphasize this with loose language.

The “Learn More” button directs the user to a site with a form that collects user info. 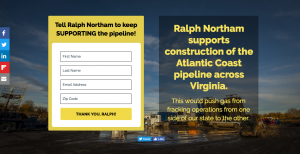 “Ralph Northam supports construction of the Atlantic Coast pipeline across Virginia. This would push gas from fracking operations from one side of our state to the other.”

The added detail of fracking operations isn’t accidental. Recall the exchange in the first debate in which Gillespie remarked: “You’re opposed to fracking, which is the source of the natural gas that’s going to flow through the pipeline. And so, what’s the point of building an empty pipeline in the commonwealth of Virginia?” Northam admitted that his opposition to fracking is limited to fracking in Virginia – when it comes to Pennsylvania, “They can do what they want.”

Although Northam opposes fracking in Virginia, the language of the form site is loose enough to allow a reader to assume the ACP pushes gas from fracking operations within Virginia. The home page for the form above is virginiapolicyforum.org, which consists of pro-Gillespie propaganda on various issues.

Surely the RGA and their State Solutions lackeys want the anti-pipeline voters who supported Perriello to stay home, or vote Hyra, or skip the Gov portion of the ballot.

The Northam campaign continues to act as if there aren’t enough of these votes to matter – perhaps a few thousand – and they seem satisfied they can put together a winning coalition without them. Democrats remind me that polling shows the pipelines simply aren’t a big deal to voters.

Therein lies the silver lining: if this reading of the electorate is correct, then Republicans are tossing away cash to suppress a vote we’ve already abandoned.