There are parts of Virginia so beautiful they literally take my breath away. Albemarle County is like that, with the shadowy Shenandoah mountains in the near distance, and tree-lined country roads throughout the county. I met Angela Lynn there this week to canvass in historic Ivy, home to explorer Meriwether Lewis (of Lewis and Clark fame). 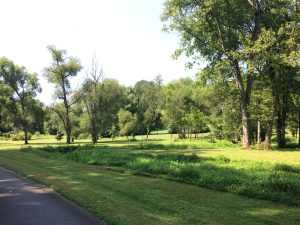 Angela is making her second run at the House of Delegates seat for this severely gerrymandered district. She’s worked hard since losing in 2015 to talk to the rural voters in her district about gerrymandering and voting rights, she’s been to home after home of disenfranchised people who never vote, and talked to them about why it’s so important that they vote, what’s at stake. She’s talked to people for whom it’s difficult to get to the ballot about early voting options–they were distrustful of this method at first, and she’s worked to bring them around to it. She’s made exactly the kinds of investments we’re going to have to eventually make in every rural district.

And it definitely takes time. We canvassed for over an hour, and knocked on about 6 doors, because the houses are so far apart, with endlessly long driveways. This is what rural canvassing is like….trying to figure out where the houses are even located, hidden behind trees and on large properties, with mailboxes placed sporadically nowhere near the house!

One couple we talked to asked Angela about the “Sportsmen for Lynn” campaign sticker she was wearing. I’m sure they were trying to feel her out on her position on guns, but actually it gave Angela a nice chance to talk about a different issue that’s central to her campaign–protecting the natural elements in this area. Because there are various-sized waterways all over this area, and Angela loves to fish, and believes that these waterways need to be protected so that everyone in the area has the opportunity to do so. The proposed Dominion fracked gas pipelines don’t run directly through this district, but are a serious issue to voters in this area–you can’t pass five cars on the road without seeing a No Pipelines bumper sticker. When those pipelines are built and eventually leak, as all pipelines do, every lake, stream and creek will be impacted. In those waterways closest to the leak, fish will die or become too poisonous to eat, and the water won’t be safe for drinking or washing or swimming in.

As we passed a small natural pond on one property, Angela explained the irony of the situation. If those residents wanted to alter that pond–say fill it up–in any substantial way, they would have to ask the Department of Environmental Quality (DEQ) for a Virginia Water Protection permit. This might be a long and difficult process, sometimes requiring on-site inspection. For a little pond on their own personal property, there’s a whole permitting and regulatory process to go through! And somehow, the DEQ is bypassing this permitting process for every lake, stream, and creek that the pipeline crosses, and issuing one blanket permit that jointly covers all those waterways simultaneously. 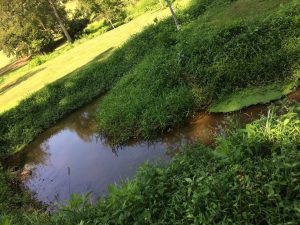 So, yes, Angela is proud to be supported by sportsmen. She knows that this land belongs to all of us, and it’s up to our government regulatory agencies and elected officials to protect it and make sure that we all can enjoy it for years to come. 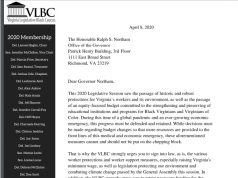 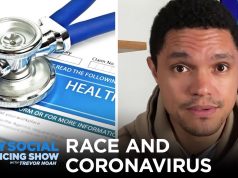 Thursday News: “Worldwide Battle Rages On Amid Small Signs of Hope”; “COVID-19’s Racial Death Gap Was Predictable”; “Trump Hates Having Too Many Voters”; “What...

You've got to be a pretty big a**hole to beat out the likes of Ken Cuccinelli and Sen. Amanda Chase and even COVID-19! But Jerry Falwell, Jr. was more than up to the challenge. Congrats...or something, lol. https://bluevirginia.us/2020/04/audio-liberty-u-president-jerry-falwell-jr#comment-4867696549