His plans for women and families don’t end there.

In the third and final debate, Ralph pressed Ed Gillespie on whether he would support LARCs — long-acting reversible contraceptives like IUDs (intrauterine devices) — or birth control implants. As a doctor, Ralph’s familiar with these types of contraception, and he knows they serve in a greater capacity; not only do they ensure women’s reproductive health and stability, but they also provide economic security for women and families.

The logic is simple: Increasing healthcare access doesn’t just benefit women and families, but Virginia as a whole. Here are a few other ways Ralph plans to strengthen the commonwealth by supporting women, families and reproductive autonomy.

Along with increasing access to LARCs, Ralph will be a bulwark against the Trump administration’s efforts to limit reproductive freedom and decrease access to healthcare. As a medical professional, Ralph believes a woman’s reproductive choices should stay between her and her doctor — not legislators — and he’ll fight to make sure women not only maintain access to reproductive care but expand that access, as well. When legislators tried to ban abortion coverage in health insurance plans, Ralph firmly opposed their efforts, and as governor, he’ll fight to overturn that amendment along with any others like it.

Women still only make 78 cents on the dollar compared to men — and it’s even lower for women of color. This wage gap means that Virginia women are getting shortchanged by nearly $12,000 dollars per year, and Ralph knows that’s not right. Compensating women less than men isn’t just unfair, but it’s bad for the economy. Women make up the majority of consumer purchases in the country, and ensuring their economic equality would put more money into Virginia’s economy.

As governor, Ralph will work to make sure salary information is more transparent, so women can fight discriminatory practices when they happen, not after the fact when it’s too late to act. It’s 2017, and ensuring women earn equal pay is long overdue.

One of the biggest ways we can fight inequality is through offering new parents paid leave. Paid family leave reduces infant mortality by as much as 10 percent and increases the number of well-baby care visits and vaccinations. It has economic benefits too — paid family leave reduces turnover and training costs for businesses, and when women go back to work and stay with the same employer, they see faster wage increases. In order to make it work, Ralph plans to provide businesses incentives to offer paid family leave to their employees. Additionally, he supports creating a tax credit to make it affordable for small businesses to allow full-time employees to take at least eight workweeks of paid parental leave.

Ralph understands good childcare and early education are key to children’s success. He’ll make early childhood education for every Virginia public school student a top educational priority, and as chair of the Commonwealth Council on Childhood Success, he’s already led an effort to open up and improve classrooms for up to 13,000 more kids. The cost of childcare is a heavy burden on families, and making it more affordable would go a long way in reducing inequality in our commonwealth by making room for increased spending, a more skilled workforce, and higher wage growth.

We’ve made progress addressing domestic violence in Virginia so far, but that doesn’t mean we can’t do more for children who are abused, as well as kids who witness it. Many times, they’re left with long-lasting mental and emotional effects as a result of sheer proximity to these occurrences, which are often as devastating as the effects exhibited by children who are the victims of direct abuse. Ralph’s concerned about this, which is why he knows the importance of passing laws that protects children by requiring increased penalties for domestic abuse. 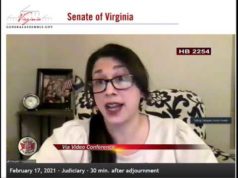