Gotta give points to Ed Gillespie for chutzpah, if not for honesty or integrity. Check out Gillespie’s mailer below, in which he touts himself as (supposedly) “pragmatic” and “moderate.”  (note: h/t to the National Journal, which I’m told first had this story, unbeknownst to me since it’s behind a strong paywall…)

The only problems: 1) Gillespie abandoned any pragmatism or moderation in this campaign, during/following the scare given to him by neo-Confederate bigot Corey Stewart in the GOP primary this past spring, at which point Gillespie lurched to the far, far right; 2) the Washington Post editorial Gillespie’s quoting from actually RIPPED Gillespie for flirting with “toxic ideas,” for hiring “Trump’s own field director for Southwest Virginia, Jack Morgan, a blowhard who says America is headed for a civil war and that the movement to take down Confederate monuments is a communist plot to subvert the nation,” for “using Confederate monuments as a wedge issue,” and “for courting white nationalists already energized by Mr. Trump’s race-baiting.”

Can you get more dishonest than Gillespie quoting from THIS editorial to argue he’s actually a “moderate” “pragmatist?” Un-be-friggin’-lievable. 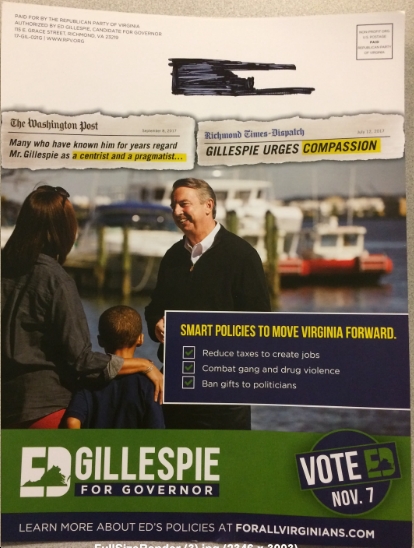 *EXCELLENT* question by @RonFilipkowski - "Why won't Youngkin be seen with Trump?" https://bluevirginia.us/2021/10/video-photos-with-10-days-until-election-day-former-president-barack-obama-campaigns-for-the-va-democratic-ticket-at-vcu-in-richmond#comment-5581619193