On October 13, one of Virginia Del. John O’Bannon (R-HD73)’s constituents attended his “Oyster Roast” on October 13 and asked O’Bannon about why the U.S. Senate failed to repeal “Obamacare.” O’Bannon’s response was that there were: a) “some real soft Republican Senators”; that “Donald doesn’t know anything about health care,” and also that (laughably) Democrats and the media “are better at messaging.”  LOL, I wonder what Trump supporters will think of O’Bannon throwing their hero under the bus.

The constituent, by the way, had been alarmed to hear Del. O’Bannon – a physician who’s fond of referring to himself as the “Doctor in the House” (see photo below) – say on TV that he thought efforts to repeal “Obamacare” and strip healthcare away from more than 20 million Americans (and more than 500,000 Virginians) were “a good starting point” (!). The constituent was also concerned that O’Bannon, chair of the House of Delegates’ Health subcommittee on Appropriations, has led the effort to block Medicaid expansion in Virginia. Given Del. O’Bannon’s lack of town halls and presence in the community, the constituent felt the need to attend Del. O’Bannon’s campaign event to ask him where he stood regarding healthcare and to try to get answers. As you can see from O’Bannon’s ridiculous non-answers, as well as his horrendous healthcare record, clearly the job here for voters in this 50%-43% Clinton district on 11/7 is to vote for Democrat Debra Rodman – and to send O’Bannon back to practicing medicine full time! 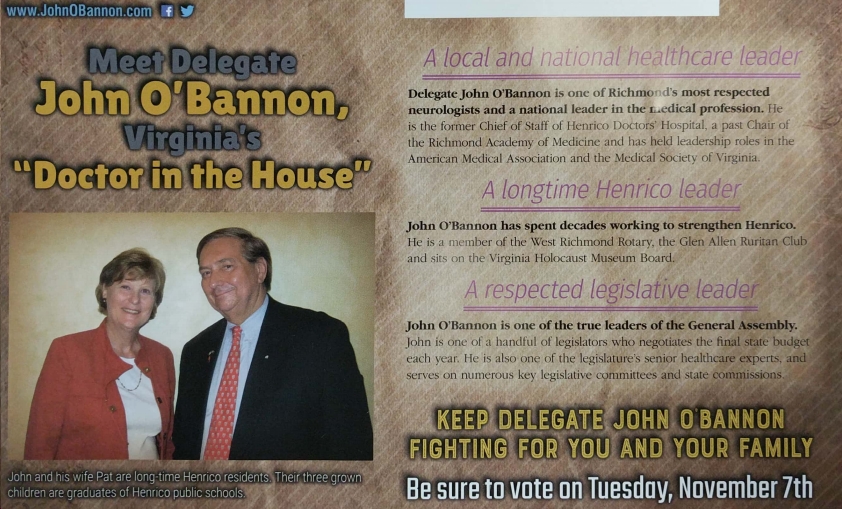