The most common thing I hear about Ralph Northam’s campaign for Governor of Virginia is “It just doesn’t seem like there is anything going on” or “you wouldn’t even know there was a campaign happening.” This may be an unfair characterization of a campaign that has probably broken records for voter contact in a VA Governor’s race. But despite record spending and massive operations, many Democratic campaigns, including the Clinton campaign last year, seem to lack a critical form of presence in the public consciousness.

Ralph Northam is a dream candidate. Our guy is a military doctor who spends his spare time volunteering at a hospital for dying children. Their guy was a lobbyist for Enron. You’d think Democrats would be inspired. We’re pissed off about Trump. But we’re not nearly as excited about our candidates as we should be.

Back in the days before our political campaigns became “professionalized” we used to do all sorts of things that we rarely do now. We had big public rallies. We had signs and slogans and songs. There used to be a theatrical element to politics, a sort of romantic patriotism about small “d” democracy that you can still find every four years in New Hampshire and Iowa.

That energy is what we are missing, now that we’ve narrowed the scope of our political campaign to only those activities which are targetable, trackable and mass-producible.

The Democratic Party of Virginia is running a massive and well-funded coordinated field operation with canvassing and calling. This is great. But as we have always known, these types of activities have marginal impact at best. Phone calling has very little effect. Canvassing in some cases has shown impact of 1.8 to 2%, but a new compilation of 49 field experiments from 2016 concludes that canvassing had no measurable effect.

So what does work? What does get people excited about a campaign? What makes a campaign feel like it exists? What makes it feel present and tangible? What gives it momentum?

That’s what Jonah Berger, marketing expert, author of Contagious: Why Things Catch On and researcher at the Wharton School of Business, found in a comprehensive study of what kind of advertising actually delivers results.

Berger found that even if marketing efforts provided messages and triggered word-of-mouth, it didn’t last long enough to have an impact on behavior unless it was accompanied by visual cues in the environment that kept those word-of-mouth conversations alive so they could spread and multiply.

What kind of visibility could we be doing?

Lawn signs. Yes, lawn signs do “vote.”  Research shows that they work about as well as canvassing and at a fraction of the cost in money and time. Distribute them early and often. You can target them to strong Dems on high traffic residential streets. 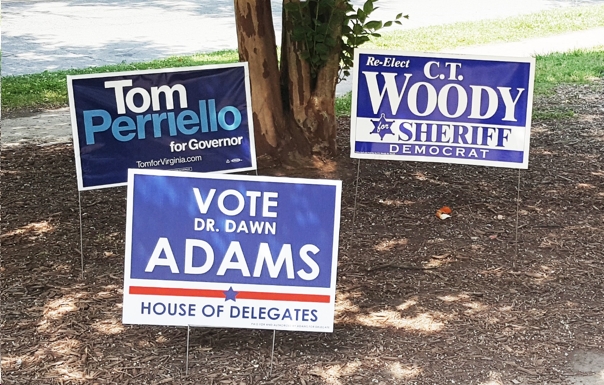 Bumper stickers, buttons, t-shirts and hats. Give them away if you must. Consider them a highly effective form of paid advertising.

Branded materials work in many ways:

These are not insignificant effects. Consider the endorsement or “third party validation” factor. If someone comes to your door representing the campaign, they are perceived to have an agenda. They aren’t thought to be neutral. A random neighbor, even one you don’t know, is perceived to be neutral. It’s like the difference between a Honda sales person telling you how great the new Civic is, versus your neighbor telling you how much they like their new Civic. Your neighbor is unlikely to be an expert, but their endorsement still carries more weight.

Hats, t-shirts, lawn signs and bumper stickers also function by giving others “permission” to support your candidate, especially in places where Democrats might feel outnumbered or even persecuted.

Donald Trump’s red hats served this purpose in his campaign. Where initially people were somewhat embarrassed to admit their support for Trump, seeing lawns signs and those red hats gave them permission to go public. It created safety in numbers for them to express their own support. As his numbers grew, it generated peer pressure and huge momentum.

In addition to signs and wearables, what else can we do to make our campaigns seem tangible to people? 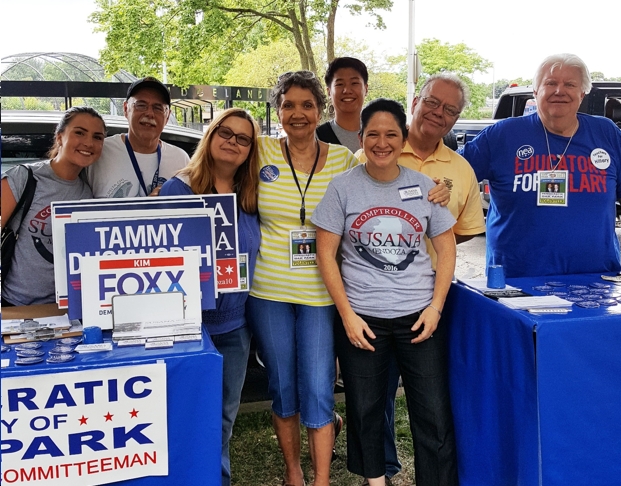 Shopping areas. Wherever people in our communities gather, we should have a physical presence. At grocery and big box stores, we can organize people to wear t-shirts, hold signs and if allowed, hand out flyers. People can ask you to stop handing out flyers, but you can still stand there in your t-shirt holding your sign.

Fairs and festivals. Booths are nice. People are better. We should attend every fair and festival in twos and fours or even big groups. Wear t-shirts, hold balloons, hand out stickers, literature and other branded items.

Katie Sponsler, one of our excellent House of Delegate candidates here in the Richmond area, described attending a major festival with a team of supporters with t-shirts and signs. They combed through crowds in a “V” formation, talking to people along the way. It made a huge impression and apparently psyched out her opponent. You can do this with or without the candidate.

Cars. You can’t campaign at a homecoming game but you can put postcards on people’s cars. Put them in the driver’s side window, not under the windshield wipers. Anywhere cars gather, you can distribute postcards.

Campaign supporters should carry bumper stickers with them. If they see a car with other stickers, say, for Bernie, Hillary or Obama, they could leave a sticker for them with a nice note on the back. I got a Mark Warner sticker this way once. I stuck it right on my car.

Overpass signs. If you have a nice banner, a group of people holding it out over a freeway overpass at rush hour and waving can be seen by hundreds of cars, if not thousands, in a short amount of time.

These signs with lighted letters are surprisingly easy to make with a few dollars’ worth of battery operated LED Christmas lights and black foam core boards from the dollar store. 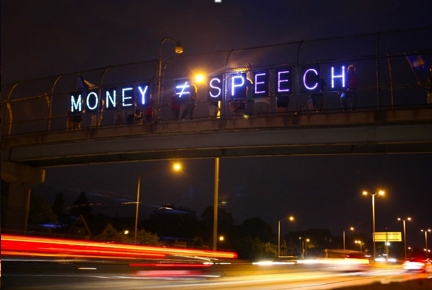 A nice benefit of visibility is that you can take pictures and video of it to share on your social media. You might even get some earned media coverage.

None of these activities are difficult to plan. They simply need volunteers.

I often hear campaign organizers say that if we have volunteers, we need them to canvass and make calls.

First, many, if not most volunteers do not like to canvass or call and won’t do it no matter what you tell them. Why waste these resources? Why not give them something else to do? Let’s reach out to all those people who signed up to volunteer and never scheduled a canvassing or calling shift and see what they’re up to.

Second, while there are almost no studies of visibility in campaigns, the evidence from the private sector suggests that it may even work better than canvassing. The only known study of the impact of people holding signs shows they increased turnout by 3.48%. The study is small, but given the scientific evidence we do have, we can’t actually say with great confidence that canvassing is a better use of people’s time.

Many of the House of Delegates candidates in the greater Richmond area have decided that visibility makes sense. They are doing a great job on getting out lawn signs and even 4×8 signs.

UpRise.org is working with these candidates and local groups like Together We Will RVA and the Liberal Women of Chesterfield County (and Beyond) to organize teams that engage in some of these fun visibility activities.

Let’s try something different. What have we got to lose? We can’t just keep doing what we’ve been doing. Let’s take a chance on visibility.

People are tuning out. They are sick to death of politics and immune to advertising. If you want to get people’s attention, get out there in front of them so they will practically trip over you while they are going about their normal lives.

At the very least, people will know that we’re here!

UpRise.org is hosting a Voluteer Fair from 10-noon this Saturday, October 7th at the La Prade Bracnch Library in North Chesterfield (southwest of Richmond), where people can learn about these types of visibility projects and other campaign volunteer needs. We’ll also be doing some sign and t-shirt making. Please join us! Learn more and RSVP at bit.ly/uprisefair