Yes, I’m a grumpy old man. Yes, I’m a curmudgeon. But this time, Virginia Republicans have really gone too far.

I am currently looking at a mailer from the Virginia Republican Party that attacks the  candidacy of Democrat Courtney Lynch for Supervisor in the Brookland Magisterial District of Henrico County. This is a pure attack ad; it doesn’t even mention Lynch’s opponent, it simply urges that we vote against her. It accuses Lynch of three things:

1) Supposedly being “Levar Stoney’s Liberal Sidekick”;
2) Supposedly caring more about the city of Richmond than she does about Henrico County, where she lives;
3) Supposedly wanting to spend money on bus transportation that will only benefit residents of Richmond City.

As long as I’ve lived in Virginia, Republicans have always accused Democrats of being crazed lefties (I know – eye roll) and wanting to waste their precious tax dollars. So, maybe this isn’t new.

BUT…why, of all people, did they choose to put Levar Stoney on their mailer? Why not Ralph Northam? Mark Herring? Why not the Republican’s ultimate demon — Nancy Pelosi? Nope, the mailer chooses Levar Stoney.

Is it, perhaps, because Levar Stoney is a man of color? Are the the photos in the mailer that show a white woman and a black man smiling at each other meant to raise a decades-old fear in a certain segment of the Republican base? And why did they specifically, consciously choose the City Of Richmond as the jurisdiction they claim Courtney Lynch really cares about? Could it be, just maybe, because Richmond is a majority black jurisdiction? 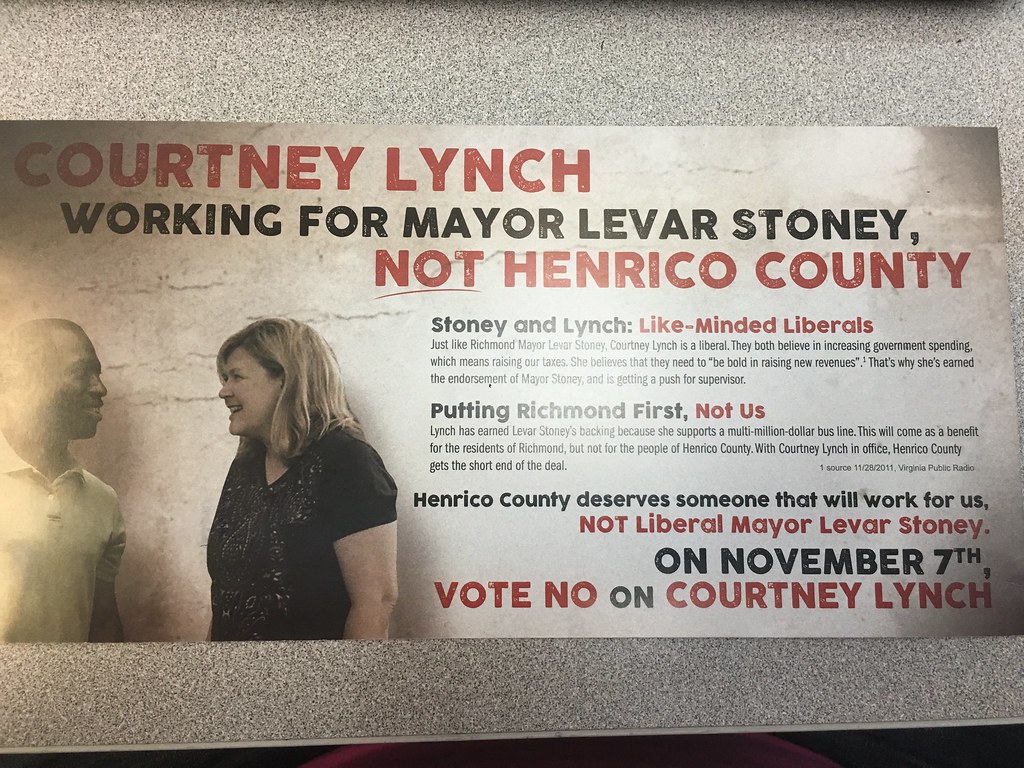 More broadly, is it possible that in the second decade of the 21st century, a major U.S. political party would still be riling up its “base” by sending out racist, or at least “dog-whistle”-style racist messaging? I guess I shouldn’t be surprised, given that the former Party of Lincoln is now the Party of Trump, but still – do you people have no decency whatsoever?

UPDATE by Lowell: See below for a press release from Courtney Lynch’s campaign on this disgusting mailer.

Courtney Lynch, candidate for Brookland Supervisor in Henrico County, responds to the mailer sent by the Republican Party of Virginia

“I was disappointed and dismayed to see the negative, ugly, mean-spirited mailer that the Republican Party that was received yesterday. This dog whistle hearkens back to a time when people tried to divide us. This campaign should be about issues and our vision for the future of the Brookland District and Henrico County, not about name-calling and some kind of guilt by association. This is not what Brookland or Henrico is about today.

“I am focused on Brookland’s future, in ensuring we have the best schools, that we create good-paying jobs and that we revitalize our older neighborhoods all while keeping our tax rate low.  I want to see Brookland families succeed.

“As a mom of school age children and a veteran of the Marine Corps, I will not engage in these kinds of demeaning and baseless attacks. I want this campaign to reflect my values – honest, forthright, goal-oriented, without name-calling and nasty insults.

“I call on Mr Witte to renounce this mailer and to apologize to the citizens of Brookland.

“I commit to continuing to run a positive campaign that focuses on ideas, not insults, and lays out for voters my platform and my plans for the future.

UPDATE #2: Looks like yet another dog-whistle, race-baiting mailer has dropped in mailboxes in Henrico County, Virginia. Ugh. 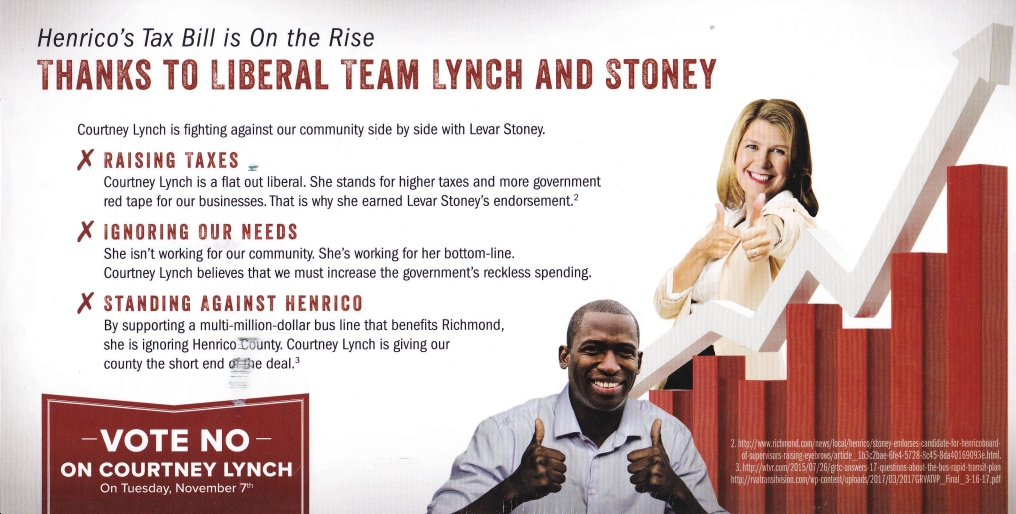