Did the Washington Post correct “Sideshow Bob” Marshall’s “mis-gendering” of Delegate-elect Danica Roem, who crushed “Sideshow Bob” on November 7 (and clearly, “Sideshow” isn’t taking his defeat well – LOL!)? Note that Marshall routinely refused, during the campaign, to refer to Danica Roem as “her,” “she,” etc., instead intentionally mis-gendering her as a man (“he,” “him,” “his,” etc.). Which make me wonder how “Ms. Roem” ended up in “Sideshow Bob”‘s unhinged screed to the Washington Post. Theories?

P.S. Another point, as an LGBT Virginian just sent me, is why the Post even published this bigoted, false, unhinged crap to begin with. Eyeballs? Clicks? Does that justify publicizing the ignorant, hateful views of anti-LGBT bigots? What does this add to the public discourse, exactly? What next, letters from white supremacists? 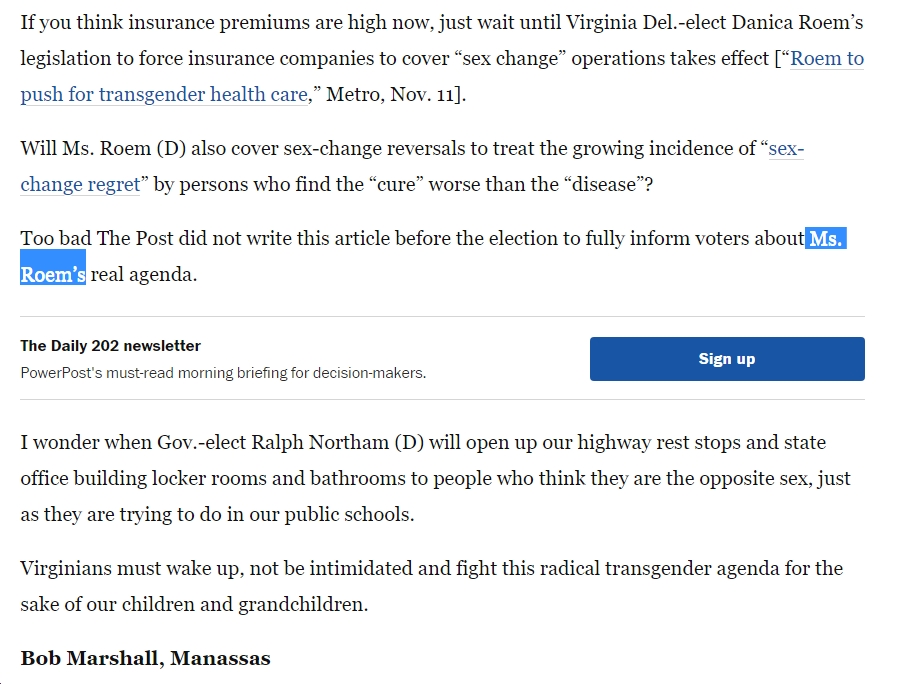 Gotta love, btw, that Jason Miyares is AG of Virginia, but can't spell "statute" (he misspelled it not once but twice (as "statue"/"statues") in this press release...lol https://bluevirginia.us/2022/01/now-we-know-why-jason-miyares-was-firing-the-lead-lawyers-at-colleges-last-week#comment-5712066000