This piece is appearing in newspapers in my very red congressional District (VA-06).

It has long seemed to me that making information visible — as through the use of charts and graphs — is a much more effective way of getting the truth across to the citizenry at large than relying on mere words to make the assertion.

(Perhaps I’m wrong about this, but it has long had me wondering why political leaders do not make more use of such visual presentations. From all the years I’ve seen presidents deliver messages from the Oval Office, I can’t recall any who used visual demonstrations — like the charts in the piece below — to show the American people some reality that would help persuade them about what needs to be done.)

It is in that belief that I’ve made this venture, below, in showing conservative readers that the reality is different from what their leaders — in particular Donald Trump — have been telling them. And that therefore, they really ought not trust what they hear from such dishonest sources.

Leaders lying to the people is poison for a democracy. Now, as the nation seems to be drawing ever closer to some kind of constitutional crisis, concerning the current presidency, it is especially important that the American people not be deceived.

Here’s one way of demonstrating the problem of the lack of credibility at the top.

One falsehood Americans have heard concerns  an alleged “alien invasion.” During the campaign, Trump repeatedly declared that illegal immigrants were “pouring” across our borders, as if the situation has out of control and worsening by the day.

But take a look at this graph regarding the numbers of undocumented immigrants within the United States. 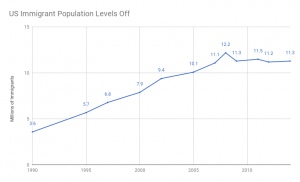 As the chart shows, the number of illegal immigrants in the nation actually has declined over the past nine years. More were leaving the U.S. than coming in. So, again, Trump was speaking falsely. His lie not only stoked people’s fears but also distracted them from the real sources of the increasing strain on the lives of average Americans.

Repeatedly, Trump has declared that the U.S. is “the highest taxed nation in the world.” But look at this chart showing how the U.S. stacks up compared to other advanced nations regarding what proportion of total national income goes to taxes: 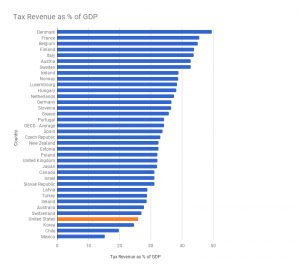 That’s the U.S. fourth from the bottom. Again, Trump is trying to deceive the people –telling a lie that not only helps clear the way for a tax cut that would transfer a few trillion dollars to the very rich, but also feeds a false narrative of our having an especially over-sized government.

Here’s another big lie—this one about “violent crime” in America. During the campaign, Trump repeatedly talked about our escalating crime rate, and then in his Inaugural address, Trump spoke of “American carnage.” But look at this graph, which shows the rate of violent crime in America since 1990. 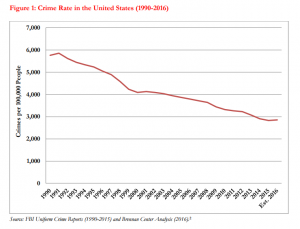 There was a slight uptick in 2015, but it barely registered in comparison with the significant drop in that crime rate over the past generation, falling by nearly half in that time. No lies are good, but those designed to feed people’s fear and anger are especially pernicious.

These charts make visible the realities of three issues on which citizens must make important judgments. It brings us to that old joke from the Marx Brothers movie: “Who ya gonna believe, me or your own eyes?”

Some falsehoods are more important than others. And right now, the health of American democracy may depend on Americans understanding what the graphs above demonstrate about the honesty of the president who is now trying to get Americans to believe:

A hostile foreign power – the Russian regime that been attacking both the institutions and the values of democracy around the world — has conducted an assault on a foundation of our democratic system.

Gradually, the pieces (by now, hundreds of them) are coming together to show the picture of an American presidential campaign eager to ally itself with an enemy of the United States. The list of people in the Trump circle who have provably lied about their dealings with the Russians grows ever longer, and now includes the President.

The purpose of the falsehoods coming out of the White House these days seems clear: to prepare the president’s supporters so that — once the investigations are completed, and the guilty are fully exposed – they will reject the truth and believe the lies they’ve been told.

Wise American patriots will not fall for that. The falsehoods described above should make it clear enough who is not to be believed.

Andy Schmookler – award-winning author and former candidate for Congress in VA-06 – is writing a series titled “A Better Human Story,” which can be found at http://abetterhumanstory.org/.

Somewhat of a mixed bag in these numbers. Combined with the Monmouth poll today, this election could be REALLY close. Make sure you vote and remind everyone you know to vote - BLUE! https://bluevirginia.us/2021/10/monmouth-poll-shows-tie-race-for-virginia-governor-republicans-with-more-enthusiasm-shift-in-red-direction-since-last-months-poll#comment-5578328037