Should primaries be the standard method for choosing Democratic nominees? Should other methods – “firehouse primaries,” conventions, caucuses, etc. – also be considered and/or used?  My view is that there are pros and cons to each method, but in general I lean strongly towards primaries, because they allow for the greatest voter participation. However, let’s not kid ourselves that there are disadvantages to primaries here in Virginia, such as the inability to use “ranked” or “range” voting methods (e.g., Instant Runoff Voting) and also the fact that we don’t have party registration in our state. To me, the former point is the key one, particularly in cases where there are a large number of Democratic candidates vying for the nomination.  Because, again, I want to see as many voters able to participate as possible, BUT I also want to see majority rules, which in the case of a 5-person nomination contest, let’s say, could result in our nominee winning with just 21% of the vote.

With that, here’s a statement by VA-01 Democratic candidate Ryan Sawyers, calling for a state-run, open primary for Democrats in that district. Note that recently, VA-10 selected a primary as its method of nomination, while VA-05 opted for a convention. 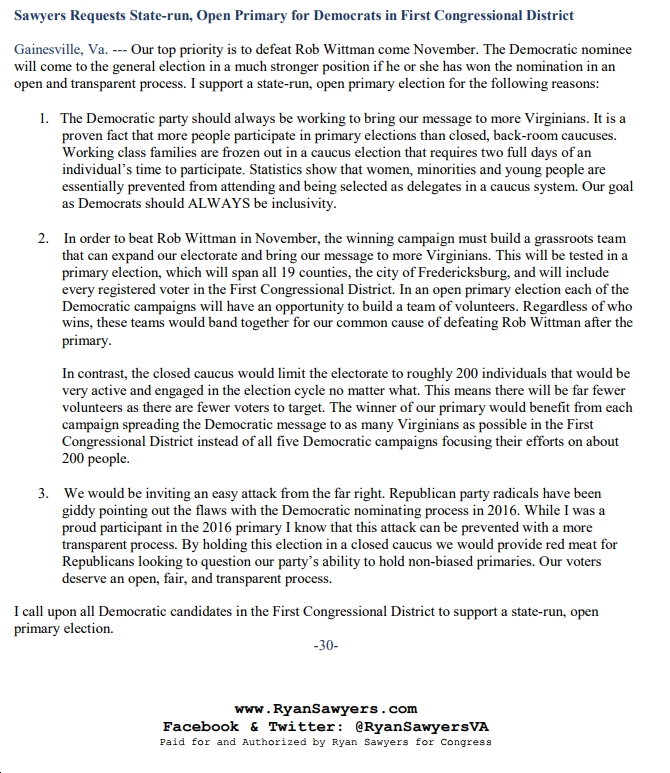