As Tom Perriello says in the video below, this Saturday is a chance for Virginians to express their opposition to a “backwards, 20th century approach to energy production that ruins our environment and ruins small business” and to say yes to a “job-rich, clean-water approach going forward.” Note that there are some “very important public hearings on December 6th and 7th, 11th and 12th,” so this is an important time to let all the “powers that be” in Virginia that we want CLEAN, CHEAP, RENEWABLE energy, not the dirty/dangerous/obsolete kind. By the way, for anyone under the delusion that natural gas is “clean,” note that it “is a super-potent greenhouse which traps 86 times as much heat as CO2 over a 20-year period,” that it “has no net climate benefit in any timescale that matters to humanity,” and that…even Shell’s CEO is not sure whether coal or gas are more environmentally disastrous (see screenshot below the video of Tom Perriello). 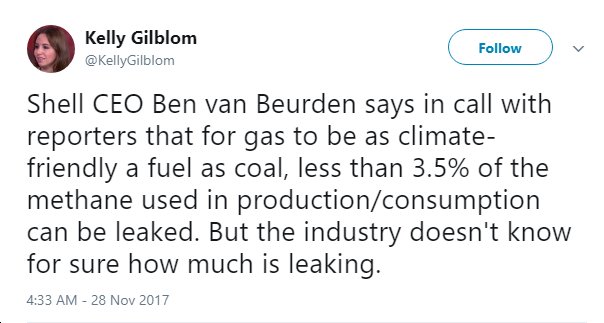