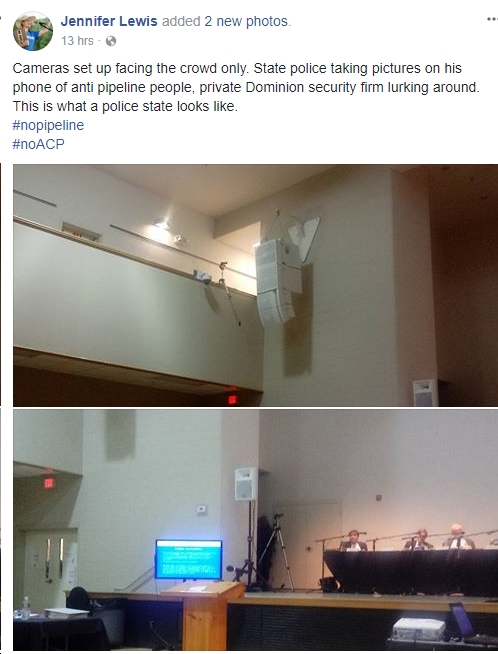 Dominion’s tricks to oppress opposition and sway opinion in its favor, ranging from simply coordinating supposedly independent supporters to something as reprehensible as photographing the opposition, were on full display during the first day of the State Water Control Board meeting on the Atlantic Coast Pipeline (ACP).

The company’s influence showed itself early when the first three speakers, State Senator Frank Wagner (R) and House Delegates Roxann Robinson (R) and Buddy Fowler (R) gave outlandish endorsements for the ACP.  Senator Wagner claimed that our national defense depended on the pipeline (!), while Delegate Robinson said the ACP would improve our air quality (!!), despite a study showing that the pipeline will result in emissions equivalent to around 20 coal plants.  The politicians’ support is not altogether surprising, though, considering that they have collectively received over $125,000 in donations from Dominion, and that the corporation’s corrupting influence in Virginia politics is well-documented.

What is surprising is how much was done to increase Dominion’s support platform in the meeting, while reducing the platform of those there exercising their constitutional right to speak out and oppose the pipeline. 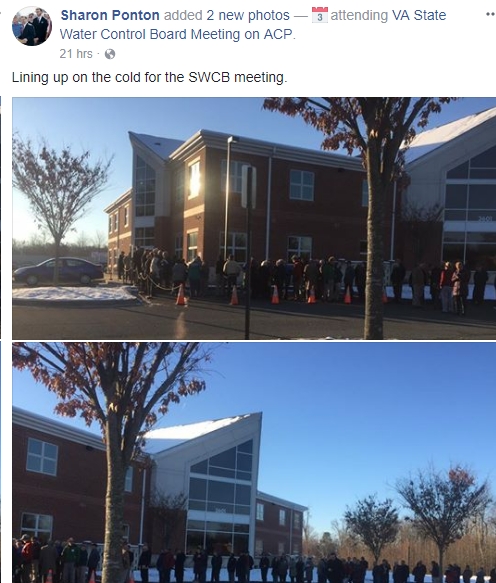 Those in opposition to the ACP arrived to stand in line and reserve a right to speak before the venue doors opened, some as early as around 6 am.  This was in contrast to the August public hearings for the ACP, where Dominion bused in pipeline supporters early so that they could speak first.  The reason for this soon became clear:  speakers were made to indicate whether they opposed or favored the pipeline when signing up to give testimony, and then speakers were called in an order that made it so that testimonies of alternating viewpoints were given in succession.

In other words, pipeline supporters who showed up hours after those opposing the ACP were allowed to speak around the same time.  Pipeline supporters must have been notified beforehand, as they knew they didn’t need to make the effort to arrive early and stand in line in almost freezing temperatures like those there to speak against the ACP.

Admittedly, they alternated viewpoints at the Mountain Valley Pipeline (MVP) hearing last week as well.  But Dominion presumably had a say in deciding to use this method at the hearings, especially since those planning to speak in support of Dominion’s ACP, who are supposed to be uninfluenced by and unknown to the company, knew in advance.

Further, the number of supporters for the MVP was decidedly less.  Interspersing opposing viewpoints at the MVP hearing barely had an effect on the order in which speakers were called.  Dominion, on the other hand, coordinated their ACP campaign so that it would seem that they had a lot of supporting speakers.  A closer look, however, showed that most of these speakers were not independent of the corporation, but part of unions or companies involved in the construction of the ACP or retired Dominion employees.

Something that was different from the MVP hearing last week was the lack of public wifi – a factor that can be easily assumed as a Dominion strategy.  The Department of Environmental Quality (DEQ) staff decided to block access to the public wifi service in the venue, and electrical outlets were also capped, so that the charging of electrical devices and internet use were restricted.  It is with little doubt that Dominion influenced this change from last week’s hearing.  Dominion’s recently revealed presentation on its “campaign to elect a pipeline” mentioned the use of social media by pipeline opposition and restricting internet access and the use of electronics is a way of quelling this social media use.

The most shocking display of Dominion-influenced oppression of public opposition was the use of cameras by its security team.  Hired security for the corporation was caught taking pictures of people opposing the ACP.  Dominion may be using this tactic to intimidate the opposition into silence with fear of retribution, or it may actually plan to use the photos for retribution.  Either way, there is absolutely no way to justify Dominion bodyguards photographing citizens exercising their constitutional right to speak against the corporation.

It’s worth noting, one of the Virginia State Police officers who was part of the ridiculously huge law enforcement presence used in an attempt to intimidate anti-pipeline speakers, was caught taking pictures of the opposition as well.  When asked what the purpose of this was, I was told “it’s a public forum, everyone can take pictures.”  Never mind the fact that officers were there not as public citizens, but as public servants.  Taking pictures of non-consenting citizens is certainly not part of their job.  At best, this officer unprofessionally took his attention away from his duties to take a photo.  At worst, the police, in conjunction with Dominion’s security, are cataloging images of those in opposition to the pipeline.  If the latter is true, it is beyond illegal, unconstitutional, and a blatant attempt at the oppression of those who would speak out against the allowance of corrupt corporate interests that destroy lives of everyday citizens.

At today’s hearing, it was certain that Dominion pulled out a variety of tactics to try to silence the opposition.  But it was also certain that the opposition will not be silenced.  Audience members and speakers against the pipeline made their expressions seen and voices heard, regardless of any tricks up Dominion’s sleeve, and no amount of oppression or intimidation tactics will make us go away.