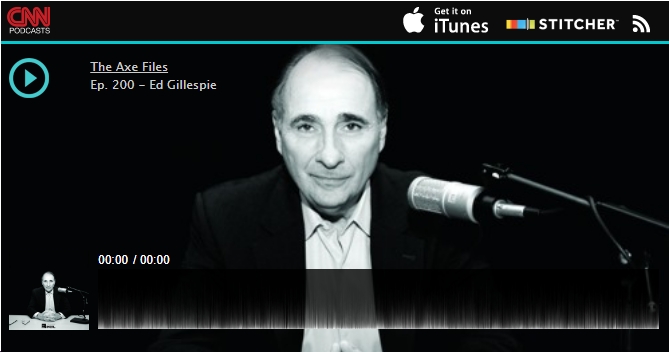 Ed Gillespie, who got clobbered by Ralph Northam a few weeks ago in the Virginia gubernatorial election, sat down with David Axelrod to talk about it. Has Gillespie learned anything from his crushing defeat? Not a lot, as far as I can tell. For starters, as RTD political reporter Graham Moomaw noted, “Based on his tone here, Gillespie seems to think the media talking about Trump is a bigger problem than Trump himself.” Other than that, Gillespie doesn’t really take responsibility for anything, including his campaign’s disgusting – racist, xenophobic, irresponsible, vicious – ads.

Gillespie also doesn’t seem to have any moral compass; instead, it’s all tactics, whether something worked or not, rather than whether its right or wrong. For instance, when Gillespie’s asked whether or not he’d vote for Roy Moore, Gillespie said he wouldn’t vote for him, but not something stronger, like “of course not, the guy’s a total scumbag and extremist nutjob.” On the political implications, Gillespie kept repeating “uncharted territory” like some sort of mantra, adding that “I don’t think the long-term pain would be worth the short-term gain of the seat” of Moore winning the election. Ya think?

Gillespie bemoaned today’s “poisonous” political “atmosphere,” yet didn’t apologize or admit that he made a huge mistake in blindly following his “team”‘s nominee for president, Donald Trump, despite the fact that Trump is the ultimate “poison.” Nor did Gillespie own up to the “poisonous” campaign he just ran here in Virginia. Asked whether Trump should resign over the many allegations of sexual harassment made against him, Gillespie bent over backwards to give him the benefit of the doubt, saying “again, he has said that they’re not true.” Ugh.

You’ve got love Gillespie reminiscing, nostalgically, about the “very exciting” times of the disastrous “Contract with America” and the vicious, destructive, extremist duo of Newt Gingrich and Dick Armey. Oh, those were the days my friend, huh? LOL

Overall, what really struck me from this interview is Gillespie’s complete failure to take responsibility/ownership of how far off the right-wing deep end his party has gone (in part under his leadership), how “polarization” has taken place almost exclusively in HIS party (which is now American equivalent of UKIP, the National Front, and other such far-right/bigoted parties in Europe), how nasty and “poisonous” his own 2017 gubernatorial campaign was, how his ads were not about “the issues” but instead were aimed at stoking the worst elements of his party’s “base,” etc, etc.  In sum, we should all be thankful that Ed Gillespie, this man without a moral compass or any significant self awareness, will not be our governor, nor will he likely ever be elected to any political office. Good riddance.

P.S. Also see below for a few highlights, courtesy of Ralph Northam’s communications director, David Turner. I strongly agree with all of these observations.

“1. Hilarious that Ed cites the Washington post poll and the ‘fake’ news media. Pick a position Ed. 2. It’s embarrassing he’s still in contortions over the purpose of his racial appeals. Own it. 3. Your point on the pedo ad was to connect a pediatrician to supporting pedos. He’s soft on crime and supports pedos. C’mon @EdWGillespie. You want to be absolved of your sins w/o ever acknowledging you committed them. 4. Many instances? I do not recall you ever putting up ads on those other instances. 5. You ran millions of dollars of ads on: MS-13, Statues, and closed with pedos. Sanctuary cities wasn’t running because it wasn’t working. Not because it was a noble decision. 6. @EdWGillespie, we whooped you on the issues. Taxes, jobs, healthcare, education, and even tied on immigration despite your campaign. And then we whooped you in suburbia, your self-admitted voter targets. 7. Getting 100k more than any gubernatorial candidate is not the goal. Winning in the environment you’re running in is the goal, so you can actually govern. Why is this a talking point? 8. @davidaxelrod quoting @EdWGillespie back to himself on being true to himself was my favorite moment. Despite being a messaging man, Ed seems to disregard tone as an important aspect of ad campaigns entirely. 9. @EdWGillespie gave up on tax cuts by August. Simply abandoned it as an issue in paid media. Why? Because it was ‘phony math.’ Maybe it didn’t work because people smelled bs? 10. The @VA_GOP certainly thought the statue issue was about heritage on Aug. 23: http://www.cnn.com/2017/08/23/politics/ralph-northam-birginia-confederacy/index.html … That was LONG before @realDonaldTrump tweeted. 11. No one forced you to run those ads @EdWGillespie. I believe you told people privately, ‘The polling is too good.’ That’s fine, but the decision was on you. 12/12. Finally, he’s making the correct decision to not run for public office again.”