As 2017 draws to a close, its a good time for the 7th District of Virginia to look back, sing Auld Lang Syne, and open up some Champagne popsicles.  Along with the passage of the GOP tax bill that Brat enthusiastically endorsed (“It’s a winner and I never lie!”), Representative Brat wrapped up the year with an Op Ed in the Richmond Times-Dispatch that side-stepped his usual verbal gymnastics to extol the virtues of vocational education.  Is this banal advocacy a sign that he is tacking left in an attempt to fend off a primary challenge from the moderate wing of his party?  Could he get side-swiped from both directions?  From leading the charge to repeal Obamacare, to paying trolls to insult his constituents on Facebook, to denying an awareness of the existence of white-supremacist Richard Spencer after Charlottesville, 2017 was the year Brat found his voice — on right-wing radio, on TV and in print media outlets.

Let’s take a look back at the most outrageous statements Mr. Brat made during 2017 with a good old-fashioned Dave Letterman style countdown.

No.10 “If you live in Judeo-Christianity Land and you expect people to basically tell the truth, right? It’s the big 10.  Go check Moses.” — Dave Brat October 12, 2017 speaking to PJ Media and snubbing Senate Majority Leader McConnell, basically calling him a liar for failing to repeal and replace the ACA. pjmedia.com/…

No.9 “Billionaires can only buy so many houses and boats and whatever!” speaking on the Tax bill with Katy Tur on MSNBC, Dave Brat interpretation of Let them eat cake. Link to quote 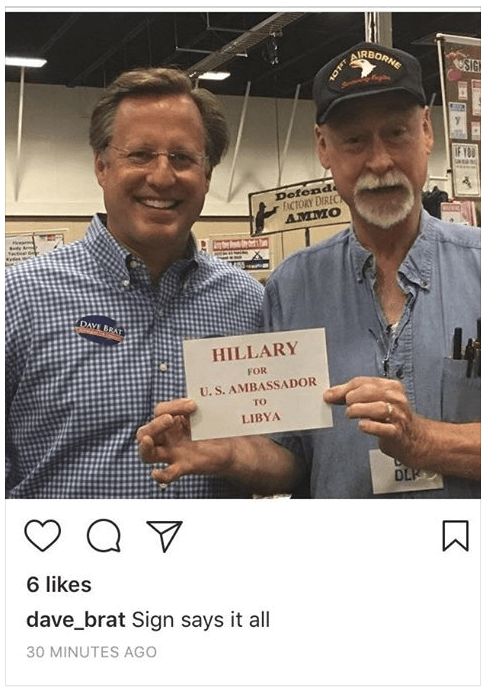 No.8 “Sign says it all.” July 1, 2017 – the 7th’s favorite faux Christian posts this picture (“Hillary for U.S. Ambassador to Libya”) on his Instagram account and then immediately is forced to take it down, blaming it on a “new staffer”. Later in the year, VA07 would find out the said “new staffer” was most likely his highest paid campaign official (and sassy paid troll) Sara James, a griwomen who does not even appear to live in the district and expands the definition of professional “communications consultant” to calling constituents “honey” and questioning whether they belong to “Antifa.”

No. 7 “In the 1920s, tax rates were dropped from 70 percent to 25 percent, yet federal revenues rose dramatically.  Richmond Times-Dispatch, Tax reform is the key to renewing the American Spirit, July 22, 2017.  Reminder, the Great Depression started October 29, 1929 and lasted until the end of the 1930’s.

No. 6 “We’ve raised an entire generation of kids with no moral or ethical grounding.” Rep. Brat Op-Ed in the Richmond Times Dispatch Nov. 25, 2017.  Speak for your own parenting skills Dave Brat, and by the way, I thought you were a former educator?

No. 5  “Everybody colludes!” Jul 14, 2017 on MSNBC with Craig Melvin “And this word ‘collusion’ is all over the place.  I mean everybody colludes in this city!  Right?”  As a constituent and voter in the 7th District, I can assure Mr. Brat we did not replace Erica Cantor with him so that he can go to Washington and collude with Russia.  VA07 constituents will collude to vote you out in 2018! Everyone colludes!

No. 4 Brat’s reaction to attacks in Charlottesville.  “The hard left came out at the Women’s March.  And, I was getting caustic comments.  I got booed at my town hall by 700 people.  They booed the preacher when he prayed.  They booed everything, right?  So, there’s these hard-edged elements.” Brat Compares Constituents to White Supremacists Representative Dave Brat never misses and opportunity to insult his own constituents, especially women.

No. 3  “Since Obamacare and these issues have come up, the women are in my grill no matter where I go.” January 28, 2017 at Hanover Tavern (not in his district) feeling secure with Tea Party activists at a private fund raiser.

No. 2 “I had one woman on my Facebook page say she was going to get in up in my grill . . . There’s paid protesters . . . paid activists on the far left, not my Democratic friends I go to church with.  There’s being paid to go around and raise havoc.”  January 31, 2017.  Paid troll. Apparently the only person being paid are Dave Brat’s own media trolls, and not his own constituents. 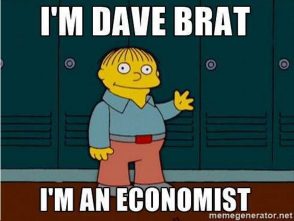 No. 1 “I’m an economist/I taught econ for 20 years/I went to Seminary.”  Everyday, every interview.

The good people of VA07 are mobilized to counter Dave Brat’s misrepresentation of his constituents.  VA07 was recently labelled a “tipping point” district by the Crosstab.com and downgraded by the Cook Political report to leans Republican.  Please consider helping us continue the momentum to unseat this House Freedom Caucus flunky by contributing to VA7th4Progress’s effort to fund an Anti-Brat billboard.  Donate here: secure.actblue.com/…