UPDATE 12/10/17: Gotta love this video of faaaar-right loon Brian Kilmeade at the VA GOP 2017 “Advance” (aka, RETREAT!!!) last night. For starters, he has no idea what the name of the hotel (The Homestead) is where he’s speaking, yet he immediately claims that “almost every major Founding Father has come through this hotel” (is that true? I’ve looked and I can’t find that anywhere, but then again, Brian Kilmeade is pretty much famous for making shit up).  Then he talks about his book on “Andrew Jackson and the Miracle of New Orleans,” which Donald Trump just the other day recommended to all his followers. Keep in mind that Trump recently honored Navajo “code talkers” in front of a portrait of Andrew Jackson, who is “known for his harsh treatment of Native Americans as president, famously signing the Indian Removal Act, which led to thousands of Native American deaths as tens of thousands were forced to relocate.” Also note that “Trump’s seeming fondness for Jackson comes at something of a low reputational ebb — a historical moment when many Americans have begun to focus on the darker side of Jackson’s record.”  So, not surprising that Brian Kilmeade, one of Trump’s favorites at right-wing propaganda network Fox “News,” is a huge fanboy of Jackson, claiming last night that evil liberals want to take Jackson’s statue down, want to remove this “hero”‘s name from “Jefferson-Jackson” dinners and his image from the $20 bill (horror!). Finally, Kilmeade claims that everybody had better watch him, because there’s a “war on history” going on, and apparently the only thing standing against victory by liberal anti-history hordes is….yep, you guessed it, folks like Brian “all terrorists are Muslims”/”Why Aren’t They ‘Clearing The Waters Of Sharks'” Kilmeade and Donald J. Trump. LOL 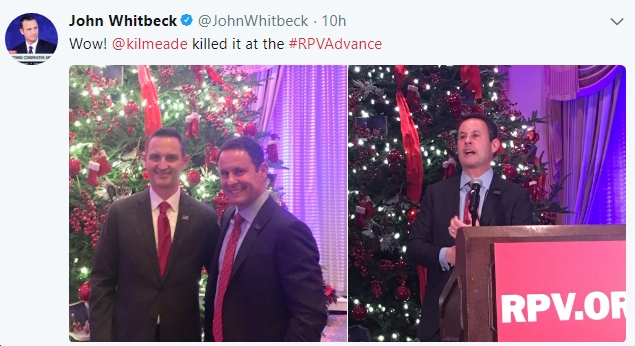 The VA GOP has selected the speaker for its 2017 “Advance” (more like Napoleon’s ruinous retreat from Moscow in the case of the VA GOP), and it’s a doozy. Check out just a few of the bats***-crazy, racist, etc. comments “Fox & Friends'” Brian Kilmeade has made over the years. For instance:

1) “[In the United States] we keep marrying other species and other ethnics…See, the problem is the Swedes have pure genes. Because they marry other Swedes… Finns marry other Finns, so they have a pure society. In America we marry everybody, we marry Italians and Irish.”;

2) “Not all Muslims are terrorists, but all terrorists are Muslims”;

Also see Brian Kilmeade gets everything wrong about undocumented immigrants: Kilmeade falsely suggests only criminals are being deported, and wrongly claims undocumented immigrants don’t pay taxes; Fox & Friends’ Kilmeade: “The president, I think, if you were doing an honest analysis, he’s having a superb trip”; Brian Kilmeade claims judges blocking the Muslim ban are saying “it’s un-American to judge people”; and Brian Kilmeade Can’t Remember His Most Embarrassing Moments. Here They Are. (“Kilmeade Asked An African-American Colleague If She Serves Kool-Aid With Her Cobbler”…”Kilmeade: Why Aren’t They ‘Clearing The Waters Of Sharks’ So The Ocean Can Be Safer?”…”Kilmeade Joked About Ray Rice Assaulting His Fiancée On An Elevator: ‘The Message Is, Take The Stairs'”…”How Kilmeade Talks About Female Colleagues: ‘Let’s See If The Girls Have Clothes On'”…”Kilmeade Advised Female Lawyers To Use Their ‘Great Body’ To Get Ahead In Court”…”Kilmeade Once Hit A Toddler In The Face With A Basketball”…Kilmeade Wonders Why Women Need Personal Space: ‘Didn’t Men Give You The Kitchen?'”…)

Yep, Brian Kilmeade will fit right in with the VA GOP (led by its anti-Semitic “joke” chair, John Whitbeck). Ugh. 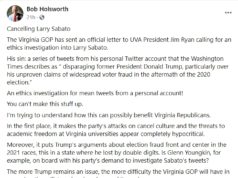 Bob Holsworth: “Is Glenn Youngkin…on board with his party’s demand to investigate Sabato’s tweets?” 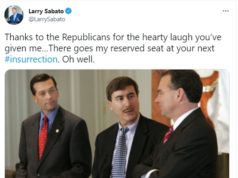 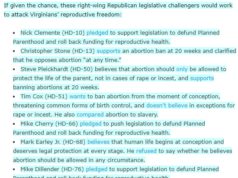 DLCC: Glenn Youngkin Wants to Ban Abortion — And So Do VA GOP House of Delegates Candidates