Congressman Dave Brat is a very interesting human being. So of course sometimes, he makes very interesting statements. Yes, you typically hear that he attended seminary in each speaking engagement. You might also hear him discussing the women that have been in his grill. “I had one woman on my Facebook say she was going to get up in my grill…There’s paid protesters…paid activist on the far left, no my Democratic friends I go to church with. They’re being paid to go around and raise havoc.” He even said “Everybody colludes” on MSNBC.

Brat was recently invited by a member of the Henrico branch of the NAACP to speak at a meeting. The President of that branch, Frank Thornton, responded to my questions by email.  “We have had new members of all parties join and support our efforts.  One of our new members that I recruited reached out to Congressman Brat to see if he could share some time with us and he agreed.”

Thornton says that the branch has been trying to work across party lines to advance their “non-partisan policy.”

“I have personally reached out to the Henrico Democrats, Henrico GOP, and the Henrico Tea Party to promote our non-partisan philosophy. By attending those meetings, I was able to share the mission of the NAACP and how they should support it in action, membership, and resources.”

Congressman Brat was greeted with applause from the crowd. He began by stating that he went to seminary, just like another attendee in the crowd. He continued to say that the media has been making all sorts of “nasty” statements about him. This led him to address Richard Spencer – the white nationalist behind the deadly Charlottesville rally – less than two minutes in his address to the crowd. Prior to the August rally, the Congressman sent a letter to a constituent claiming Spenser is empowered by the first amendment. 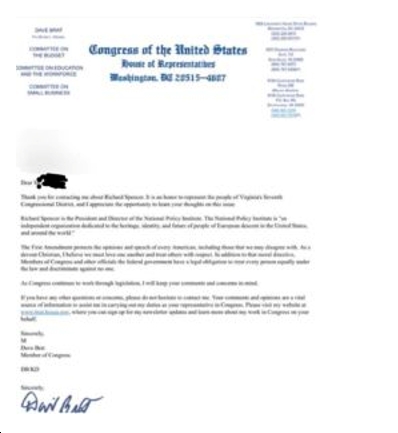 In the year 2017, most people didn’t believe Brat’s response that he didn’t know who Spencer was before the rally. Google would have informed him about Spencer in less than 5 minutes. Local voters are concerned that Brat either didn’t care enough about issues his constituents were sending him, or he isn’t able to perform proper due-diligence when responding to a constituent.

Democrats have been using this as a pressure point on Brat, hoping it highlights the Congressman’s hardline views. Brat responded with an appearance in the Richmond Times-Dispatch, attempting to rebuke all of the backlash.

A recent letter, “Does Dave Brat really respect free speech?” from Alsuin Creighton-Preis mischaracterizes my positions in light of the events that took place in Charlottesville earlier this year. Using a letter from my office written before the events of Charlottesville to make it seem as though I refused to condemn those events is nothing more than a cheap political stunt meant to mislead the public. It is abhorrent that anyone would sink to this level to try and sow seeds of racial division and mislead readers to score political points.”

Brat’s response to constituents that don’t believe him in 2018 is to call them “nasty.” Brat claimed in front of the NAACP that he has googled Spencer and he “still doesn’t know who this guy is.”  Brat continued:

“Test me on that, if you want to test me, any political competitor, I’ll take a lie-detector test, right? And lets put the election on the outcome of that lie-detector test. I like solving things in a practical way, If I can stick my finger in that machine, and say do you know who this guy is, and I’ll say no, and that machine will go… true! And that’s the competition right there, that’s how I like to do things.”

It is worth noting that Abigail Spanberger, a candidate for the Democratic nomination in the 2018 election against Brat, was in attendance at the meeting. Spanberger has garnered a lot of support in the district since she announced her candidacy in 2016.

Brat discussed his attendance of seminary many times. He told the crowd to ask all of the Democrats in D.C. how he treats them. He also engaged in a conversation with a constituent over minimum wage. Brat said that restaurants in Downtown Richmond would be hit hard if minimum wage was raised to $15. That is the only substantive response that the constituent received at the time.

That same constituent addressed the tax bill and different issues that Brat has voted for recently. Brat responded by saying he would address the questions at the end. “Thats a heck, you got a lot of questions.”

Thornton says that the crowd was respectful and engaged with the Congressman, however they do wish they had more time to voice their concerns.

“The Henrico NAACP encourages solutions from all citizens and believes that everyone affected by our representative stakeholders should be in the room when policy is being constructed.  We plan on engaging all of our representatives to make sure that the delivery of services is in alignment with our mission and equitable to all.”

The Congressman came out of the gate revved up and firing. He seemed energized, or defensive, however one might interpret that varies. With this appearance at the NAACP, it seems as if Brat realizes that his seat is not as safe as it once was. Especially with the recent blue wave in Virginia – including his district – Brat has to be aware of the momentum from the Democratic party. District 7 is set to host a competitive race for the house seat – lets hope that this election doesn’t end with a drawing downtown – or worse; with the results of a lie-detector test.