I was listening to the Kojo Nnamdi Show, waiting for Arlington County Board Chair Katie Cristol to come on the program, and heard some talk about a bill in the Maryland legislature to prohibit corporate welfare to the Washington NFL team. See that bill below, which calls for establishing an “Interstate Compact on Washington Area Professional 5 Football Team Franchise Facility Incentives” and “prohibiting a party state, a local jurisdiction in a party state, or a certain authority or corporation from providing  certain public incentives or financing for the construction of certain facilities except under certain circumstances.” In other words, no corporate welfare to billionaire Dan Snyder and his super-valuable, profitable football franchise. Great idea – and while we’re at it, how about no corporate welfare to Amazon either?  But that’s another subject, I guess.

Anyway, I was wondering if there were a similar bill in Virginia, and lo and behold – here it is, HB242 by Del. Michael Webert (R), which “[p]rohibits the Commonwealth and any of its political subdivisions from spending public funds to provide incentives for professional sports teams, beginning January 1, 2019” and also “prohibits expenditures including appropriations, grants, loans, or tax incentives used to fund facilities or infrastructure improvements for professional sports teams.”

I encourage the Virginia General Assembly to pass this bill and basically tell Dan Snyder to pay for his own stadium, his own facilities, etc. – with ZERO public money subsidizing him. No brainer, right? 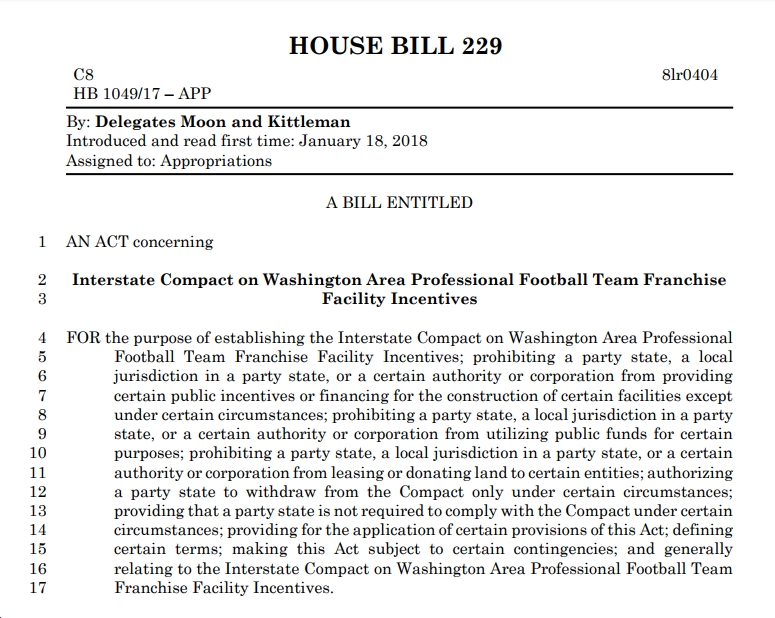 Rep. Don Beyer: “I am proud of [those]…who courageously came forward to speak out about the toxic culture Snyder created. Good riddance.”