Barbara Comstock recently did an interview on the John Fredericks radio show where she fielded softball questions about Trump’s awesome new tax bill. Fredericks has apparently patched things up with Comstock after calling her a “creature of the swamp” on his show less than six months ago.

At the beginning of the segment, Fredericks announced that he is no longer supporting Comstock’s primary opponent Shak Hill, because Shak was not truthful with him during his last appearance on the show.

Fredericks better get ready to denounce Barbara Comstock (again), because she lied her face off during her interview.

The interview was a mixture of alternative facts and hypocritical nonsense. Let’s break it down.

“There was a bipartisan consensus for years now that our business taxes were too high.”

Maybe Comstock was referring to Barack Obama who suggested modest corporate income tax cuts. The only problem with that theory is that he also proposed to completely offset this by closing corporate tax loopholes.

Sorry but we’re not seeing the bipartisan consensus here. Only one party is consistently agitating for corporations to pay less in taxes.

“Well listen, you’ve not had Democrats promote tax cuts since President Kennedy in the sixties.”

This is a straight up lie. In fact, EVERY Democratic President since Kennedy has called for tax cuts.

In 1964, President Johnson signed a bipartisan tax bill known as the Tax Reduction Act. Individual income tax rates were cut across the board by approximately 20%.

In President Carter’s message to Congress in 1978 he proposed the following:

Presumably Comstock is able to remember way back to when Barack Obama was President and cut taxes on two separate occasions. There was the American Recovery and Reinvestment Act of 2009 which cut taxes by $237 billion.

Then there was the American Taxpayer Relief Act of 2012 which passed with strong bipartisan support in the Senate but was opposed by a majority of Republicans in the House.

This statement pretty much speaks for itself. Trump just slashed taxes for the top 1% but that’s not good enough for Rep Comstock – she thinks they should pay even less. Trump cut the top marginal rate from 39.6% to 37% but Comstock thinks it should be cut all the way to 33%.

“It’s just bizarre. We should be happy for anybody seeing their wages increased”

Back in 2012, Comstock told Neil Cavuto that people should be happy about the great benefits one gets with a minimum wage job. If you want higher wages just get a better job!

“So instead what we need to have is people to understand that these are entry level jobs, you move your way up, you can get good benefits in these jobs, get good training, this is great for people.”

In the Virginia Legislature, Comstock was on the Commerce and Labor Committee that killed two minimum wage increase bills. House Bill 536 would have increased the minimum wage $1 from $7.25 to $8.25 an hour, and House Bill 32 would have made a $1.25 increase to $8.50 an hour. Both bills were tabled by voice vote.

In 2015 she voted against an increase in the federal minimum wage.

None of this matters

In the end, none of this matters because even John Fredericks knows that Barbara Comstock is toast in November. 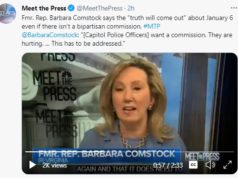