There are so many reasons why HB1558, Dominion Energy’s latest effort to write its own electric utility regulations and have its bought-and-paid-for legislature go along, sucks/should be defeated (if not vastly improved), it’s hard to know where to start. As Dan Casey writes this morning in the Roanoke Times, “If the General Assembly approves a new regulatory scheme promoted by power companies and their legislative lackeys, it’ll be the fourth time in 11 years ratepayers have been screwed. Why are voters putting up with it?” I also would love to know why any Democrat has their name on this monstrosity as a co-patron. Yeah, I’m looking at you, Delegates Ken Plum and Lamont Bagby.

Let’s start with one reason why this bill does, indeed, suck: the fact that it refunds only a very small percentage of Dominion’s (and Appalachian Power’s) over-earnings during the “rate freeze” period. See below for an analysis of Dominion’s and Appalachian’s overearnings — as high as $705 million for Dominion, as high as $99 million for Appalachian Power. So how much is being refunded under this Dominion-written bill? According to the bill, try “a one-time bill credit of $133 million.” Last I checked, $133 million is less – a LOT less – than $705 million; in fact, it’s only about 19% of the over-earnings. Shweeeeet! If you’re Dominion Energy, that is. To quote Dan Casey again:

“Virginia electric customers are about to get royally screwed for at least the fourth time in 11 years…It’s being orchestrated to benefit Dominion Energy and (to a lesser extent) Appalachian Power, the commonwealth’s dominant electric-power monopolies. The former gets special consideration in Richmond because Dominion (by far) is the top corporate donor to political campaigns. That raises blunt questions. Why do voters put up with this? Why haven’t they revolted? Don’t they care that their elected representatives repeatedly have cheated them?”

Any answers? Again, why is any Democrat supporting – let alone copatroning – this crap? 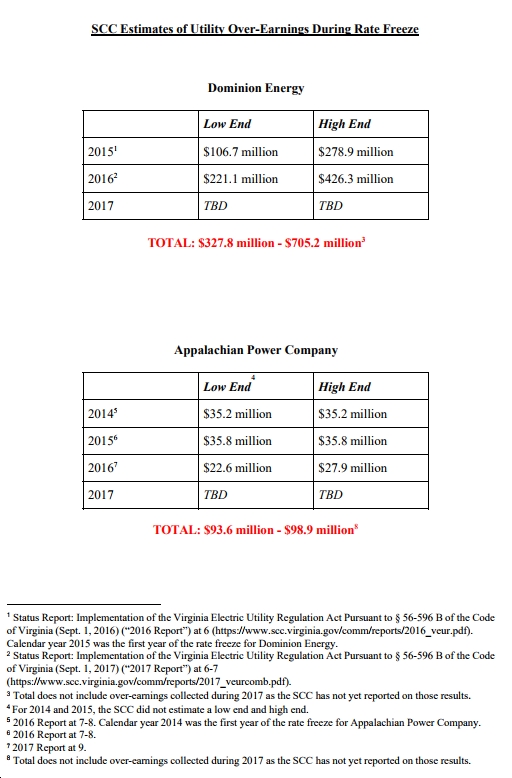