I’ve been trying my best to sound the alarm over the ongoing disaster that is Dick Saslaw’s political leadership these days. After all, it’s not hard to show that he’s bad on ethics, that he has openly lied to constituents about his Dominion bill, or that he’s in the pocket of payday lenders.

But I get the sense that a lot of people think it’s just on these few issues he strays from core Democratic values. After all, it’s a big tent, and even if Saslaw is bad on these things, he at least makes it up in other departments, right?

Well, you should disabuse yourself of that viewpoint if you still have it, because Dick Saslaw’s failed leadership has cost Democrats another huge priority: raising teacher pay.

How did this happen? On Thursday, Senate Republicans voted in unison to reject the bipartisan Medicaid expansion framework passed by the House. Despite what you might have heard from Republican leaders acting in intellectual bad faith, Medicaid expansion actually clears up MORE MONEY for the rest of the budget, as the federal government (90% of total tab) and a hospital assessment (10% of total tab) pay for things that Virginia’s budget wouldn’t need to cover anymore.

See this chart for example. 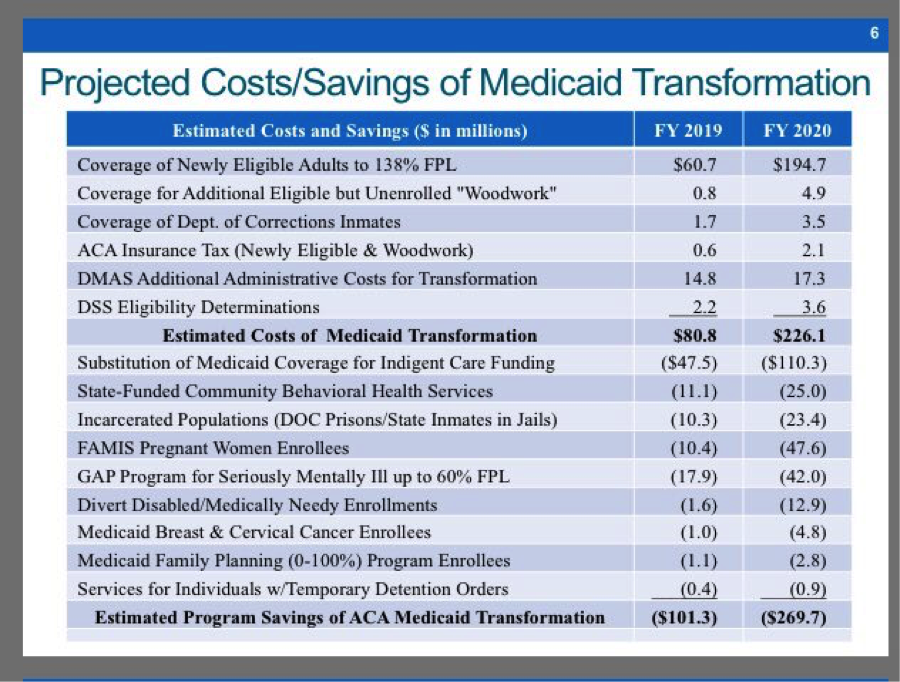 Thus, we actually had EXTRA money in the budget to put towards things like teacher raises. It wasn’t much, but I know plenty of teachers in Northern Virginia who wouldn’t sneeze at a 2% raise. Teacher pay is already well below the national average.

As a result, Senate Republicans on Thursday had to scramble to find hundreds of millions of dollars in cuts to make the budget balance. One item proposed by Republican Senate Majority Leader Tommy Norment (whose own leadership eclipses even Dick Saslaw’s for unethical behavior), was to cancel a proposed teacher pay raise in 2019.

Well, obviously, no Democrat in their right mind would vote for this, right? If the Republicans want to balance their budget after voting down Medicaid expansion dollars, they can gore one of their own oxen, right?

Well, taking such a big vote against teachers was too much for vulnerable Republican Senator Glen Sturtevant, who voted with the Democrats. That normally would have made it 20-20, and it would have failed on a tie.

At least, that’s what would have happened had it not been for Dick Saslaw. 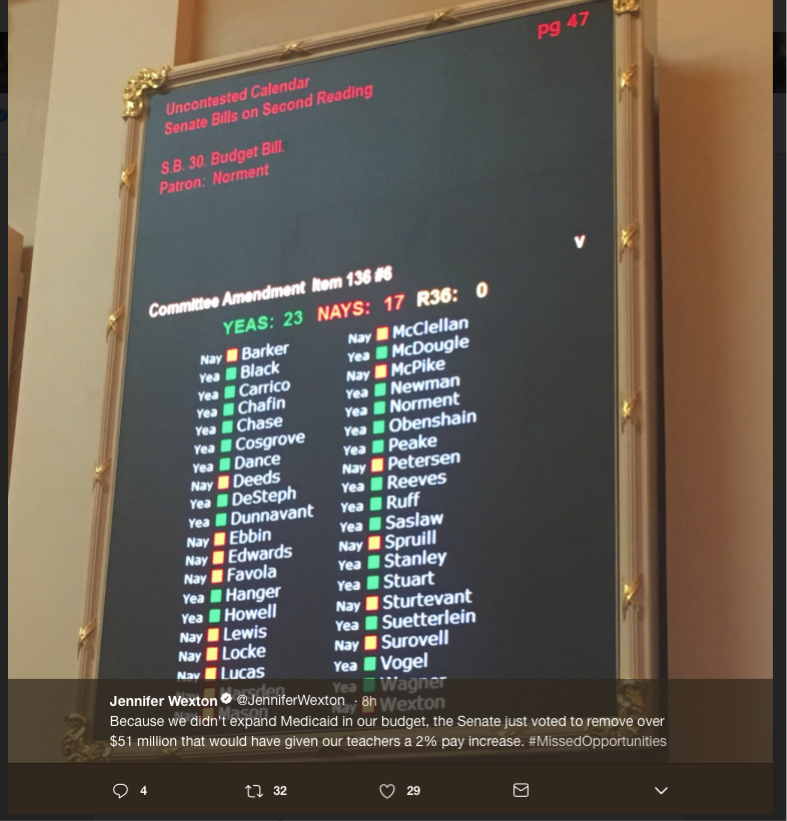 Instead, Saslaw voted with the Republicans and the amendment to strip teachers of a pay raise that barely kept up with inflation was agreed to 23-17.

That’s right: Dick Saslaw voted against teacher pay raises and got nothing for it.

I’m hoping there’s a better explanation for this, as budget procedure can get pretty tricky, but I’m certainly not seeing it. After all, Saslaw had the foresight to vote against similar cuts that day for state employees and cuts to mental health funding.

Pardon my French, but what the fuck?

Why is Dick Saslaw spending time pressuring fellow Democrats to cut teacher pay when there are five vulnerable Republican Senators representing districts that Ralph Northam won who could be wrangled into voting for Medicaid expansion? Democrats with the same margin in the House certainly haven’t had that problem.

At this point, there’s little chance Dick Saslaw doesn’t get primaried in 2019, but I worry your average 35th district Democratic primary voter is going to think Saslaw can’t possibly be as bad as so many constituents and activists are saying. Or, more likely, Saslaw puts $2 million into green-washing his image and gets loyalists to vouch for him that he’s really, truly not a bad leader.

But Dick Saslaw really is that bad. He’s dirty, he sells out his constituents to curry favor with lobbyists who dole out campaign cash, and absolutely worst of all, he costs Democrats all the time by being both ineffective and bizarrely callous with his votes and those he pressures to vote with him.

This is a disaster in the making. This man could be Majority Leader in 2019. I just hope enough people hear about his failed leadership before it’s too late.

VA Sen. Chap Petersen (D) vows that "this issue [of an 'off ramp' for masking of children in schools] must be solved in the next few weeks. We will not adjourn the 2022 session without a resolution." https://bluevirginia.us/2022/01/virginia-covid-19-cases-up-118188-over-the-past-10-days-hospitalizations-fallinghas-the-omicron-wave-finally-started-to-recede#comment-5712271456