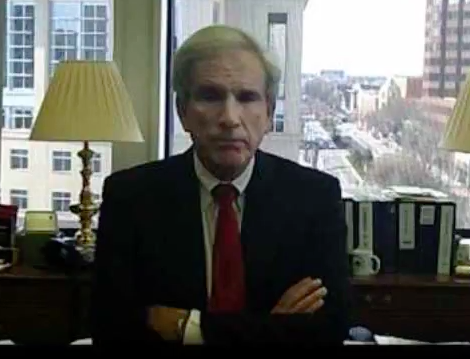 The end tends to come quickly for legislators who lose the public’s trust.

And for Dick Saslaw, the last 24 hours just saw every bit of that trust evaporate into thin air.

First, there was this letter from the SCC analyzing Saslaw’s rushed bill to protect Dominion’s outsized profits from a Clean Power Plan that never materialized—money that rightfully belongs to Virginians. At first glance, Saslaw’s bill appears to be a not-so-veiled attempt to shield Dominion from consumer demands for their money back, but the reality of it turns out to be much worse.

Pick which of the points below summarized by SCC counsel John F. Dudley most offends you, but the bottom line is this: Saslaw personally authored a bill on behalf of Dominion that would lock in billions of dollars in excess profits and deny refunds to millions of Virginians for years (if not longer) to come. And to make things worse, he then tried to sneak it past the General Assembly before anyone could figure what was in it.

Here’s a major chunk of the SCC’s summary of Saslaw’s bill:

1. There will be no opportunity to consider base-rate reductions or refunds to customers for at least six years, and then only if the utility over-earns for two consecutive three-year periods, effectively extending the current base-rate freeze further into the future.

2. There may be only a partial return of reduction in federal income taxes currently being collected in base rates.

3. The provision in current law that allows utilities to keep more than 30% of their excess earnings is continued.

4. The legislation allows the utilities to keep future excess earnings (i.e. customer overpayments) and, rather than return them to customers, use them for capital projects chosen by the utility. In addition the utilities can charge customers for these same projects in base rates.

5. The legislation deems certain capital projects to be “in the public interest,” thus impacting the SCC’s authority to evaluate whether such projects are cost-effective or whether there are alternatives available at lower costs to customers. This provision could potentially result in billions of dollars of additional costs that will be charged to customers in higher rates.

This stuff gets complicated, but it’s hard not to conclude that this legislation (combined with the Saslaw’s proud support for the 2015 law that locked in these arbitrarily high rates) represents one of the biggest lootings of public dollars in modern Virginia history. And Saslaw authored the bill himself.

It would be one thing if the story ended here. But the AP dropped another bombshell that same day after they obtained e-mail correspondence between Saslaw and executives at Dominion Energy.

Honestly, you should read the whole thing, but here are just a few devastating excerpts:

When the Democratic Party of Virginia publicly criticized a Republican state senator a few years ago for being too cozy with Dominion Energy, the state’s biggest corporate political donor vented to one of its most reliable political allies.

“I was very disappointed to see this, especially considering how our company has supported Democrats over the years,” Dominion executive Bob Blue wrote in an email to Senate Democratic Leader Dick Saslaw. “As you know, many of us have been personal supporters as well.”

Saslaw, one of Virginia’s most influential elected Democrats, quickly apologized and criticized the state party for not doing its “homework” on “how generous Dominion has been to me” and others in the party. The company and its executives have given about $350,000 to Saslaw in the last 15 years, by far his biggest source of campaign funds.

And how did Saslaw react when a reporter asked him about this? If you guessed misplaced anger, you know the Saslaw method well:

And he erupted when a reporter asked whether Dominion executives had ever reminded him of their giving.

When reminded of Blue’s email, Saslaw later apologized and said he misspoke.

Perhaps most insulting of all, check out Saslaw’s answer about whether campaign donations may led him to introduce legislation on their behalf.

Saslaw said neither Blue’s email, nor Dominion’s donations, had ever swayed his work as a lawmaker.

This last line is particularly galling, because even if it were true  (which it is not), it would mean that Saslaw truly believes in ripping off his constituents and sending our money to Dominion for peanuts in return. At the end of the day, that actually sounds worse to me.

By the way, a third article dropped on Saslaw’s attempted heist on behalf of Dominion, this time outlining the numerous ways in which consumers would be ripped off by the bill, which included this illuminating example:

But as contemplated by the pending legislation, not only will potential refunds be reduced, but those projects will be included in base rates, meaning the company will recover the same amount plus interest and profit margin.

The commission provided an example of a regulatory review scenario that determined customers were owed $100 million. If, in that same six-year time frame, the utility spent $100 million on distribution grid upgrades, the refund would be offset.

“Effectively, customers are more than $200 million out of pocket ($100 million lost refund + $100 million paid through base rates + interest/profit margin) for these $100 million of new distribution grid transformation projects,” the report says.

Sen. Chap Petersen, D-Fairfax, called that finding among the “most disturbing” aspects of the analysis.

“Not only would these projects eat up all the refunds but they would be permanently stuffed into the rate base,” Petersen said.

The combination of these articles confirm what a lot Virginians paying attention to Saslaw have feared most: that Dick Saslaw is an active and willing participant in a series of near quid-pro-quo transactions that promise safe passage of Dominion-favored legislation in exchange for campaign donations and Democratic acquiescence to Dominion’s agenda. When fellow Democrats object or feel like Dominion is getting too sweet of a deal at ratepayer expense, Dominion relies on Saslaw to put pressure on the rest of the Democratic caucus to ease up or feel their collective wrath. After all, Saslaw is the Democratic leader in the Senate. Who’s going to say no to him?

It’s wrong, it’s disgusting, it ought to be criminal, and it’s happening right now.

But for Dick Saslaw, it’s just another day representing Dominion’s executives instead of the people of Virginia’s 35th district.