Of the three GOP candidates vying to get wiped out by Sen. Tim Kaine this fall — Neo-Confederate Corey Stewart, theocratic bigot Ewwww Jackson and Del. Nick Freitas — the latter has received by far the least scrutiny. To date, he’s mostly been an obscure back-bencher in the Virginia House of Delegates, but now that he’s stepped up for U.S. Senate, he’s getting some well-deserved attention.

And so far, sadly for Freitas, that attention hasn’t been good. For instance, check out this Big League Politics post from this past Monday, entitled, “Senate Candidate Who Said Trump ‘Makes People Cringe’ Has Campaign Manager Who Calls Women Bitches.”

Freitas’ campaign manager, Mark Kevin Lloyd has a proclivity for using the word “bitch” on his Facebook page, which presents another liability for Freitas in a potential general election race against Hillary Clinton’s former running mate Sen. Tim Kaine.

Asked about his Facebook comments, Lloyd was less than overwhelmingly apologetic.

“That was probably something I did a long time ago,” Lloyd said, referring to comments posted as recently as October 2017.

Note that Big League Politics took screenshots of Lloyd’s Facebook postings, some of which are re-posted below, along with a trove of Twitter postings I found and took screen shots of. But before we get to those, check out this morning’s Richmond Times-Dispatch post by Patrick Wilson and Graham Moomaw, “Field operations director for Nick Freitas’ Senate campaign called women b*tches on Facebook.” The reporters attempted to get serious comments from Lloyd and his boss, Nick Freitas, but were basically unsuccessful. For Lloyd’s part, he responded, “’I have no real comment right now’… after a Richmond Times-Dispatch reporter read some of his Facebook posts to him.” As for Freitas, he claimed that “of course” he doesn’t “support that kind of talk,” but didn’t plausibly explain how he couldn’t have known about the voluminous trail of nasty, misogynistic, anti-LGBT, Islamophobic, pro-Roy Moore, climate-science-denial, etc, etc. posting by his “de facto campaign manager.” Also note that the AP reported in August 2016 that Lloyd, then Trump’s Virginia field director, had called Islam a “barbaric cult” and that he had “shared a meme June 16, four days after the Orlando nightclub shooting by a heavily armed Muslim who professed allegiance to the Islamic State group,” which “said people should be forced to eat bacon before they can purchase firearms.” Gack.

With that, check out “highlights” from Lloyd’s Facebook and Twitter postings. I’m not sure why nobody else seems to have gone through his Twitter feed, but it only took me a few minutes this morning to find a ton of nasty stuff. Check it out, and perhaps next time you run into Nick Freitas, ask him if he agrees with all/most/any of this stuff…

P.S. By the way, I know we’re all kinda numb from the torrent of insanity in the Trump era, but we have to fight the tendency to get inured to this extremist, bigoted crap. 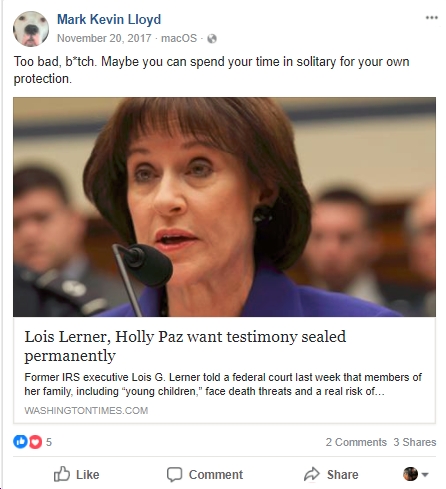 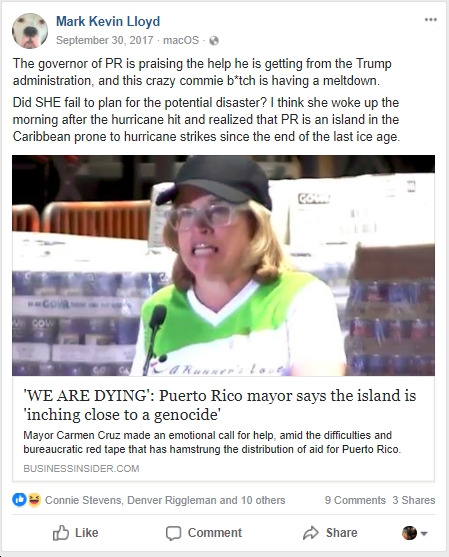 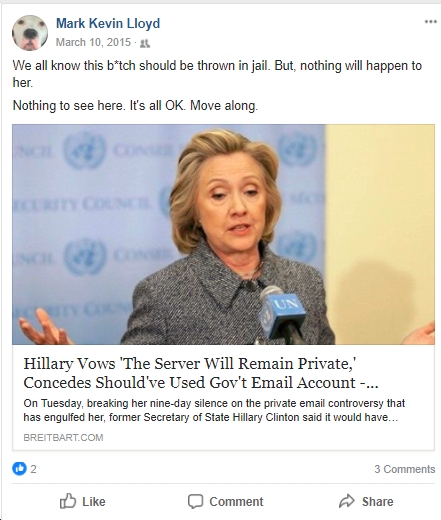 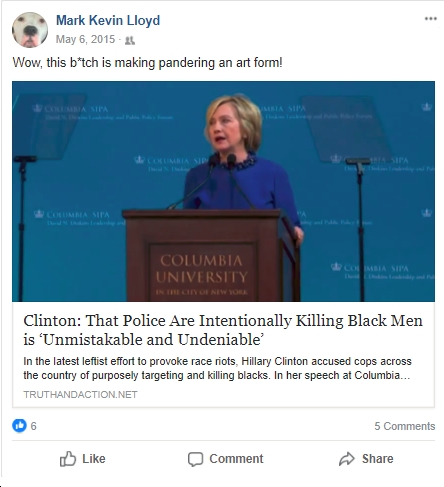 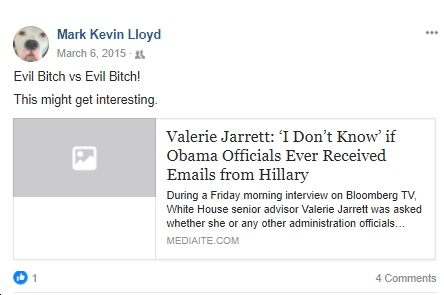 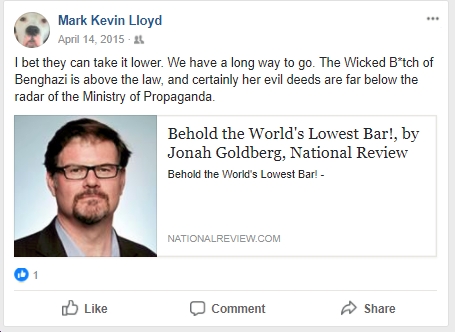 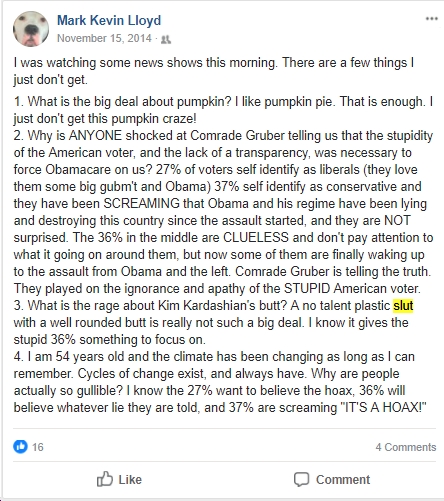 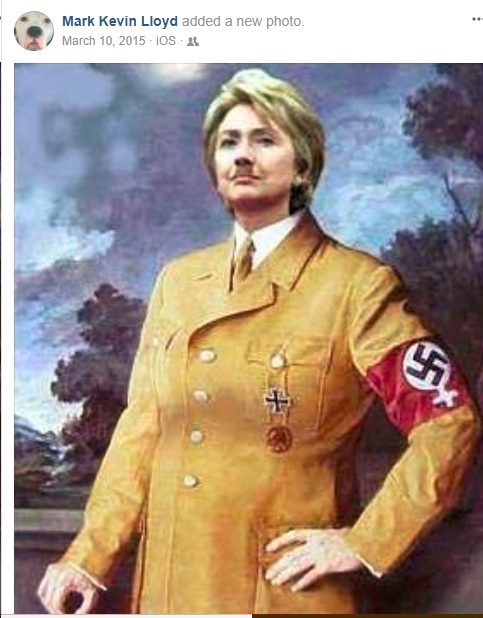 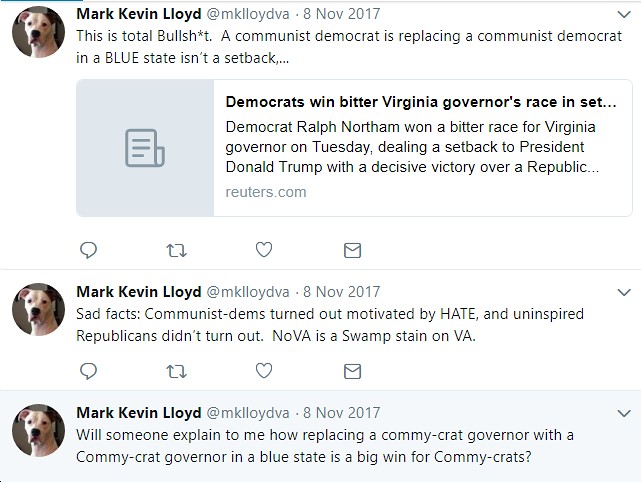 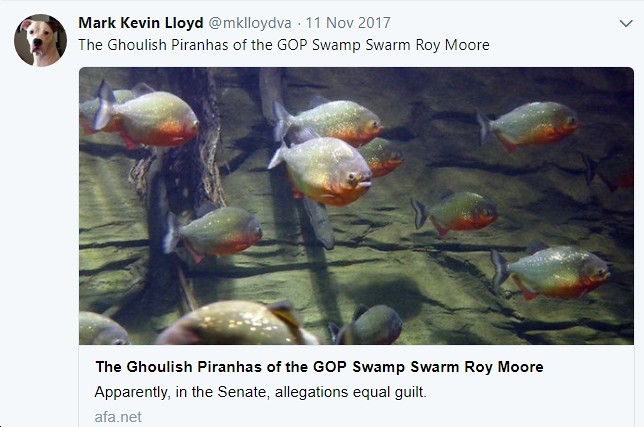 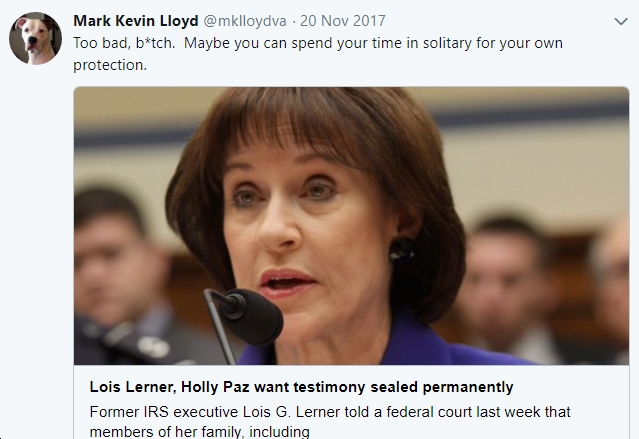 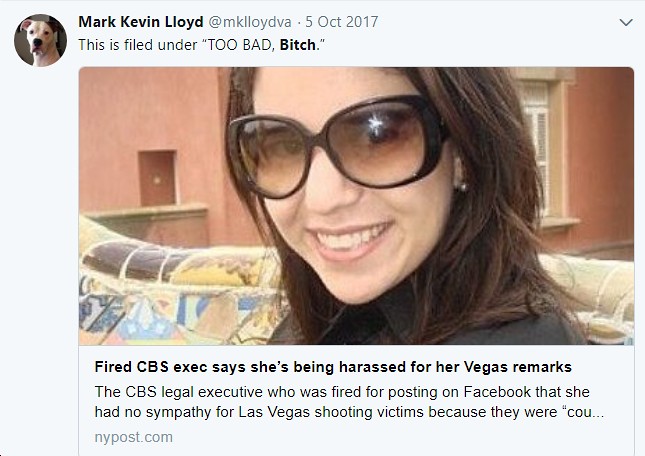 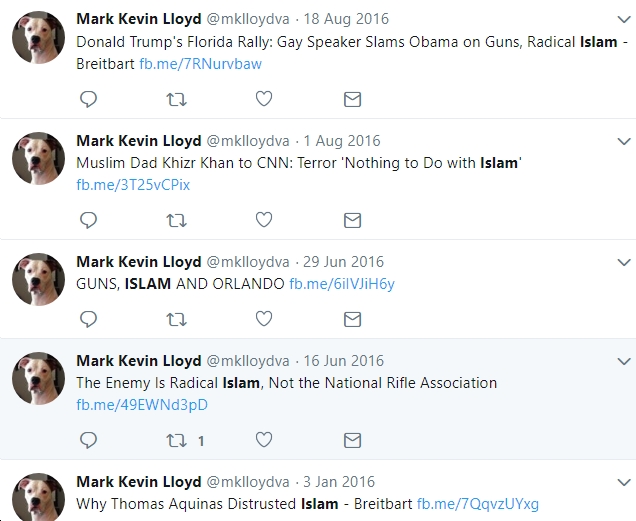 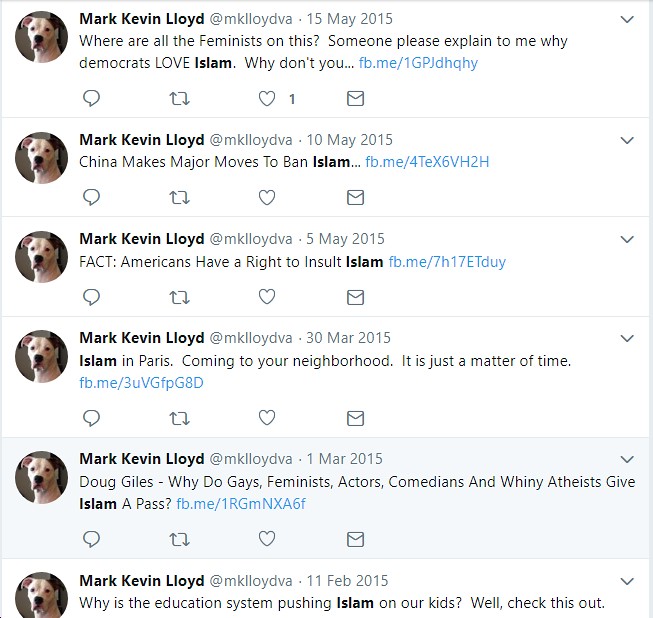 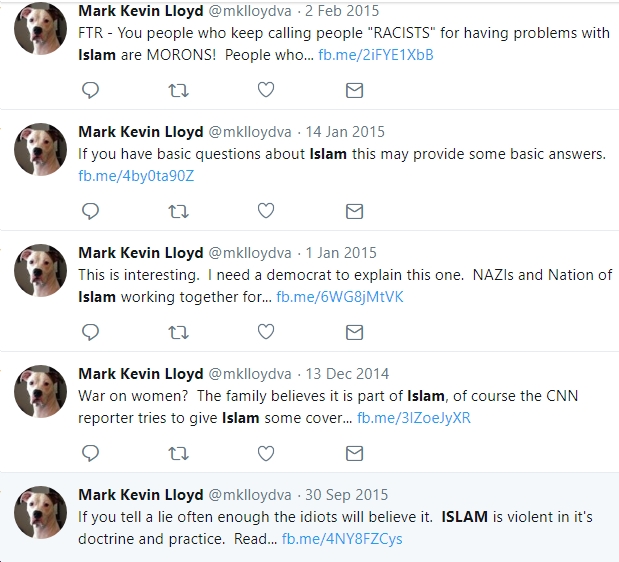 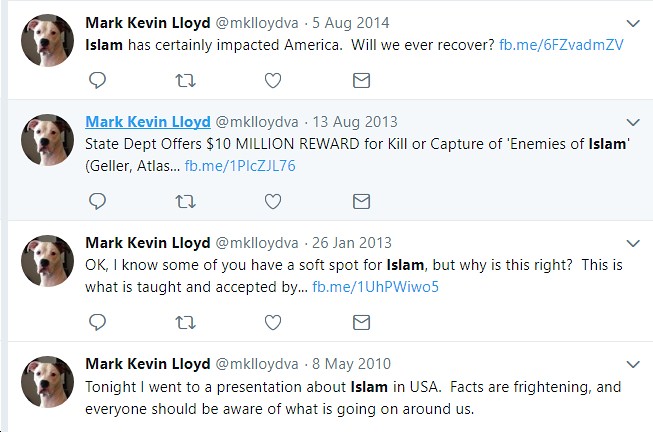 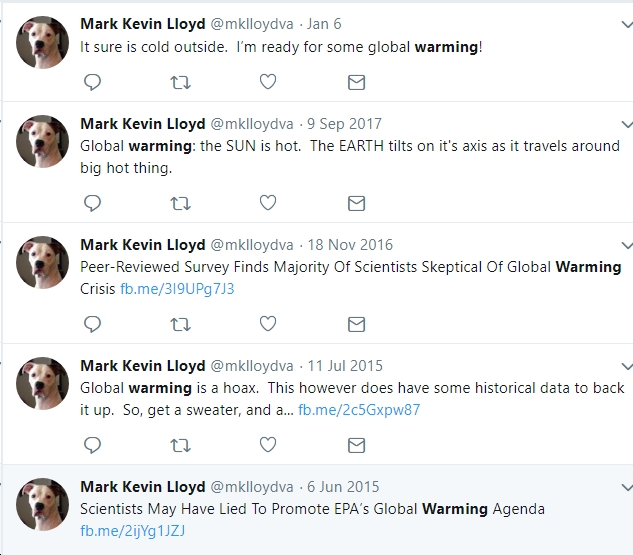 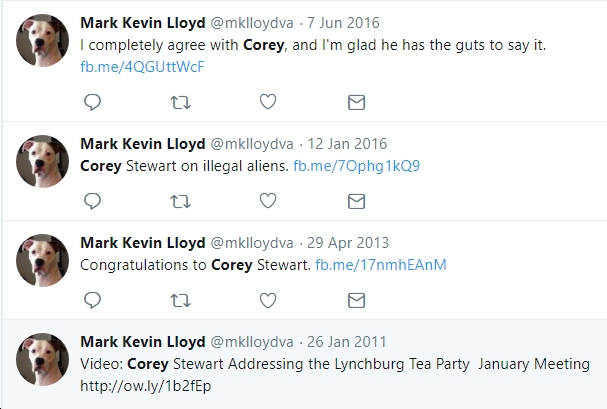 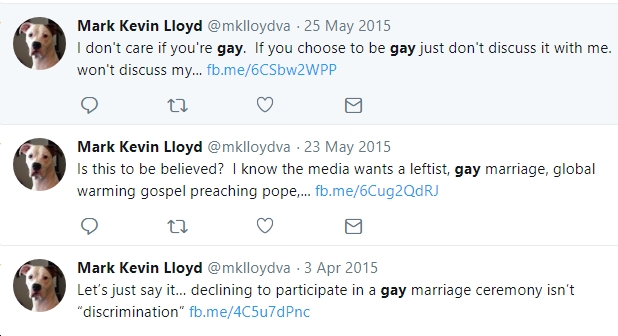 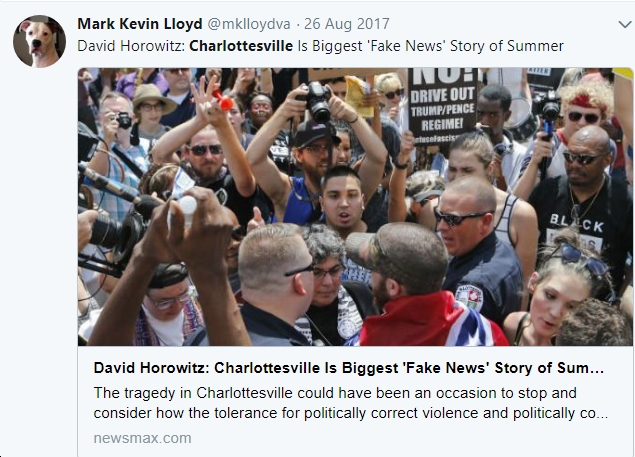