The forum this rainy afternoon for Virginia 10th CD Democratic candidates doesn’t bode well for Rep. Barbara Comstock for at least two big reasons: 1) the quality of the candidates, which is very high; and 2) the size and intensity of the crowd that showed up, which is indicative that a year+ into the Trump “presidency” (loosely speaking), the energy we saw starting at the Women’s March 2017 hasn’t subsided, at least not in the 10th CD of Virginia! Enjoy your final 11 months in office, Barbara Comstock, that’s all I have to say. 😉

Below, you can view the videos for the seven Democratic candidates who attended today’s forum. Note that each had 10 minutes to speak, including questions, but sometimes ran over due to lengthy questions right towards the end of the 10-minute period. Overall, I thought all the candidates did well, but for each video, I’ll provide a thought or two on how I thought it went. Finally, great job by Virginia Democracy Forward and everyone involved in organizing today’s event!

P.S. Note that for the group photo at the end, Alison Friedman isn’t in there because she’s a single mom and had to get to her daughter’s basketball game.

Julia Biggins spoke first, focused heavily on the importance of science and defending science – not surprising, given that she is an infectious disease scientist – particularly given the assault on science by the Trump administration. Like so many people, Biggins got much more politically engaged after Trump’s election. Biggins also talked about her support for single-payer healthcare, universal pre-K and an emphasis on STEM education, her full support for the DREAMers and opposition to any religion-based or ethnicity-based travel bans.

Alison Friedman talked about running to get Barbara Comstock out of Congress. She talked about how Trump’s election was devastating. She said she called her father after the election and asked, “how I was going to raise a daughter in a country where sexual assault wasn’t disqualifying for the highest office in the land.” She talked about her successful work against human trafficking. She said that Trump is “the epitome of an abuse of power – and Barbara Comstock is the support system that enables him.” She added that Comstock pretending to be a moderate doesn’t make her one, also that “taking victory laps on the Sunday shows about fighting for gender equality rings really false when you won’t hold this president accountable and you mock pay equity.” She argued that she will have the financial resources to compete against Comstock and her corporate backers if she is the nominee. She concluded that it’s “time’s up” for Barbara Comstock…

Dan Helmer said he’s running for Congress because he’s “seen firsthand the consequences of cowardice in our politics.” He talked about going to West Point and serving “combat tours in Iraq and Afghanistan,” as well as in the U.S. Army Reserves “to this day.” He said his life has been about three things: “my family, service to our country, and bringing people together to solve difficult problems.” He talked about making sure everyone has access to quality, affordable health care; about putting our interests above special interests; about not taking money from “any corporate PAC.” He said that Trump is the “wrong answer to the right question…what’s happened in our politics that has become about serving the biggest donor instead of the biggest need.” He talked about being part of a “new generation of proven leaders with diverse experience outside of politics…who are going to go to Washington and change the way that business gets done,” to move from the “politics of cowardice to the politics of possibility.” On climate change, he said there’s no debate about the science, and that this is one of the three major challenges to our national security (along with biological and nuclear threats).

Paul Pelletier focused on his record as a federal prosecutor for 27 years, prosecuting drug traffickers; Wall Street executives “who stole our money, our homes and our livelihoods”; corrupt members of Congress; Jack Abramof and his “cronies”; etc. He said there are “two people that need to be prosecuted and driven from office” – Donald Trump and Barbara Comstock “for her daily complicity in [Trump’s] crimes.” He said he’s “Donald Trump’s and Barbara Comstock’s worst nightmare.” He said all of the candidates in the race “are fine and good people” but that “at this time…this moment in history, it calls for the election of the Democrat that can best make the case to prosecute Donald Trump for his crimes and to hold Barbara Comstock accountable for aiding and abetting him every step of the way.” He talked about being a fearless fighter, starting when he was a kid fighting for bathroom time with his seven sisters, not afraid to go after the powerful. He said we absolutely need to take back Congress and get Trump out of office before we’re able to make any progress on any of the issues we care about.

Deep Sran said he’s a lawyer, teacher, school founder and entrepreneur whose “life’s work has been to build a better world.” He joked that he wrote a letter to President Carter when he was 8 years old about how to fix the Middle East. He said that today things are profoundly wrong “in a way that it’s never been wrong in our lifetime.” He said he hadn’t been heavily involved in politics until Donald Trump came along, that with Trump he realized that all progress “could be undone,” that everything we care about is “under assault.” He said this race isn’t about 2018 or 2020, but about leading the country to where we know it should go. He added that it’s not just about pointing out the wrong things Trump is doing, but also about trying to win back people who voted for Trump by saying “we’re here for you, you made a mistake, we understand, we are not going to just attack you for it, we’re going to show you a better way,” that progressives are committed to making progress, starting with education, about being inclusive, about protecting the environment, the safety net and the most vulnerable in our society.

Lindsey Davis Stover talked about millions of Americans working two and three jobs and still having a hard time making ends meet, yet we have politicians in Washington making it harder for them. She talked about her background in Americorps/Vista, as a chief of staff on Capitol Hill, as a senior advisor working on veterans’ policy in the Obama administration, and as a small business owner in Fairfax County. She said she’s particularly passionate about education – universal pre-K, making college more affordable, investing in apprenticeship programs, work/study, etc. – and health care as a right, not a privilege. She said the 10th CD race is a national race, that “there is no way that Democrats can take back the House in 2018 if we don’t take back Virginia 10.” She said it’s crucial that the base show up, but also that we “meet voters where they are, and that’s every place in this district.” And she said we need to figure out ways to talk to each other, work together and move the country forward.

State Sen. Jennifer Wexton said she’s running to “repeal and replace Barbara Comstock.” She talked about not aspiring to run for public office, but how she decided to do just that when she saw wrongs that needed to be corrected (e.g., the type of stuff coming out of Richmond, with stuff like voter suppression legislation, repeal of one handgun per month, and of course “everybody’s favorite, the transvaginal ultrasound bill”). She talked about the legislation she’s worked on – keeping kids safer in daycare and online, combating the heroin and opioid crisis, stemming the school-to-prison pipeline. Now, after Trump’s election, she said it’s “time to step up again,” and that she’s the best shot at winning back the seat because she’s a “successful, popular legislator from the heart of the district in central and eastern Loudoun and western Fairfax County.” Having said that, she emphasized that any one of the seven Democratic candidates would be “a huge upgrade from Barbara Comstock.” So true. She said “the only thing that matters is winning back the majority in the House of Representatives, and the only way we are going to do that is through Virginia 10.” She predicted that Comstock would roll out the same standard attacks against any Democratic candidate – tax and spend, yada yada yada. She said she’s always trying to look out for the “little guy” and does not support “special interests” or “business interests over the interests of people.” She pledged to fight Trump’s “merry band of kleptocrats.” 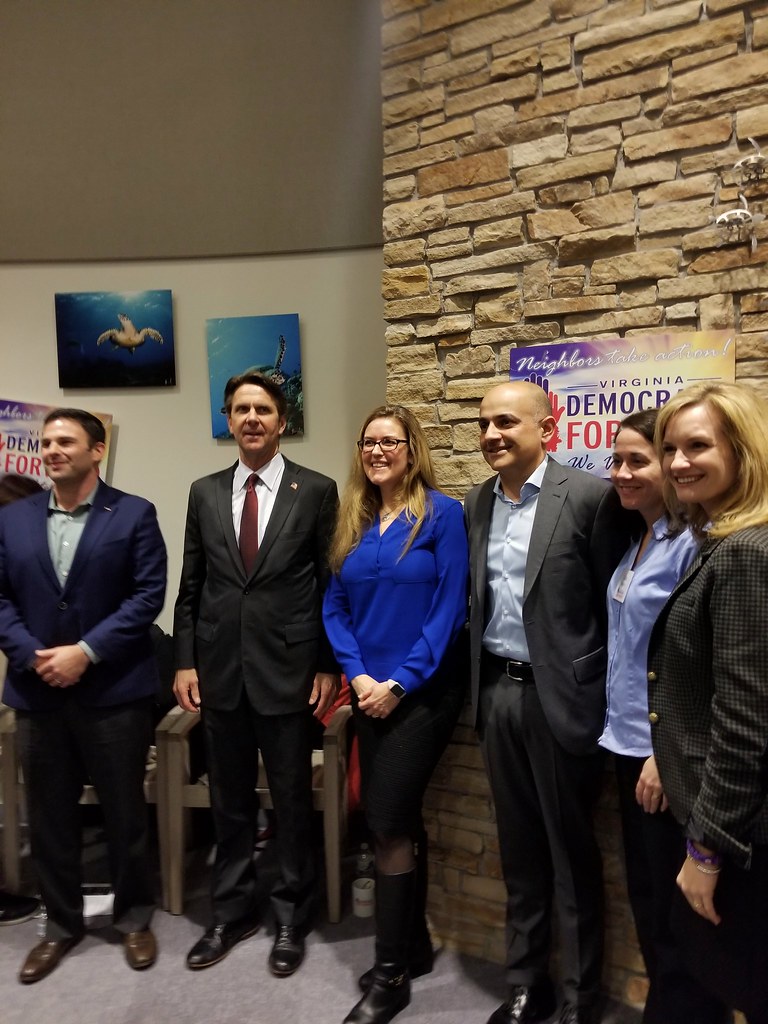 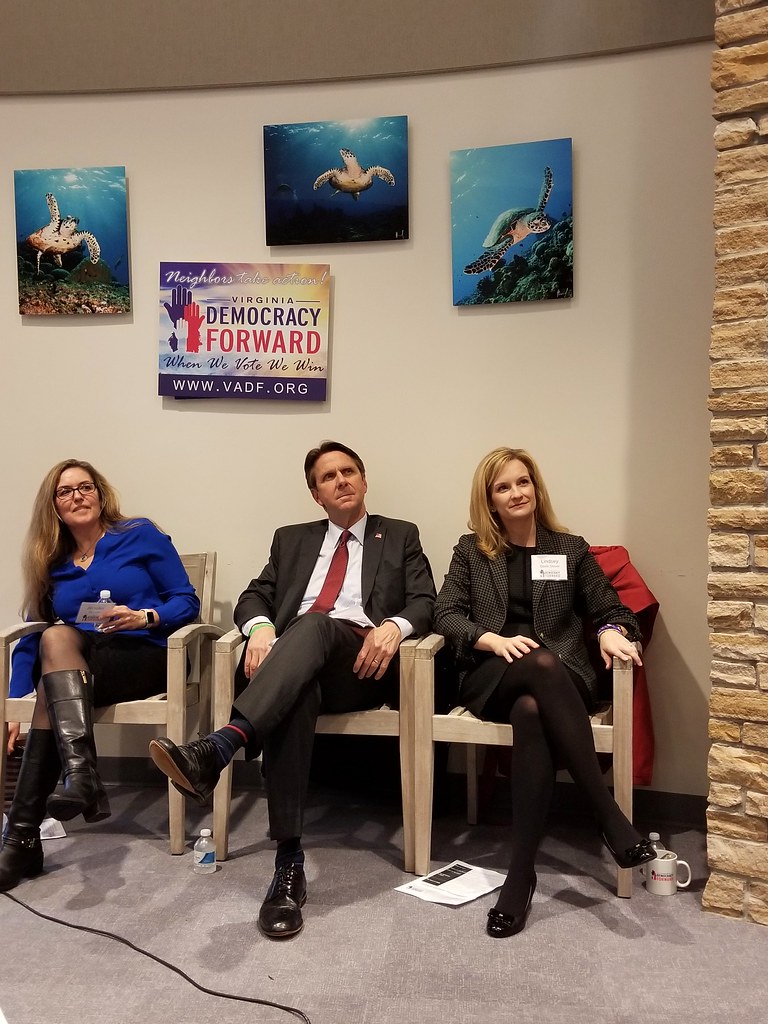 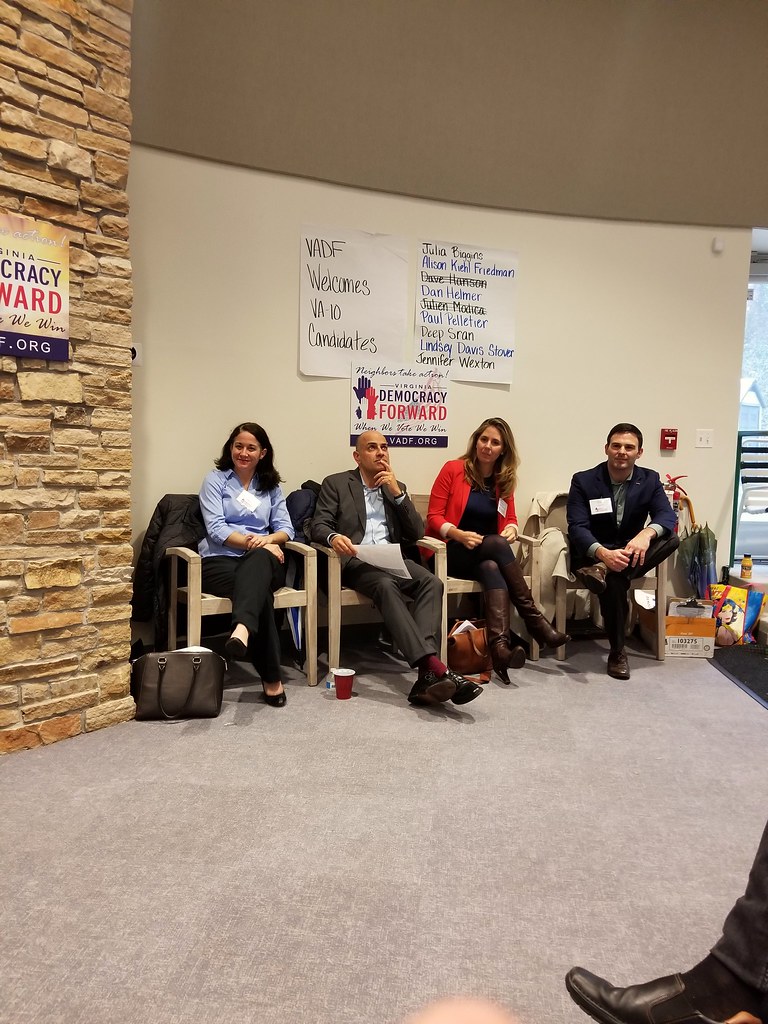 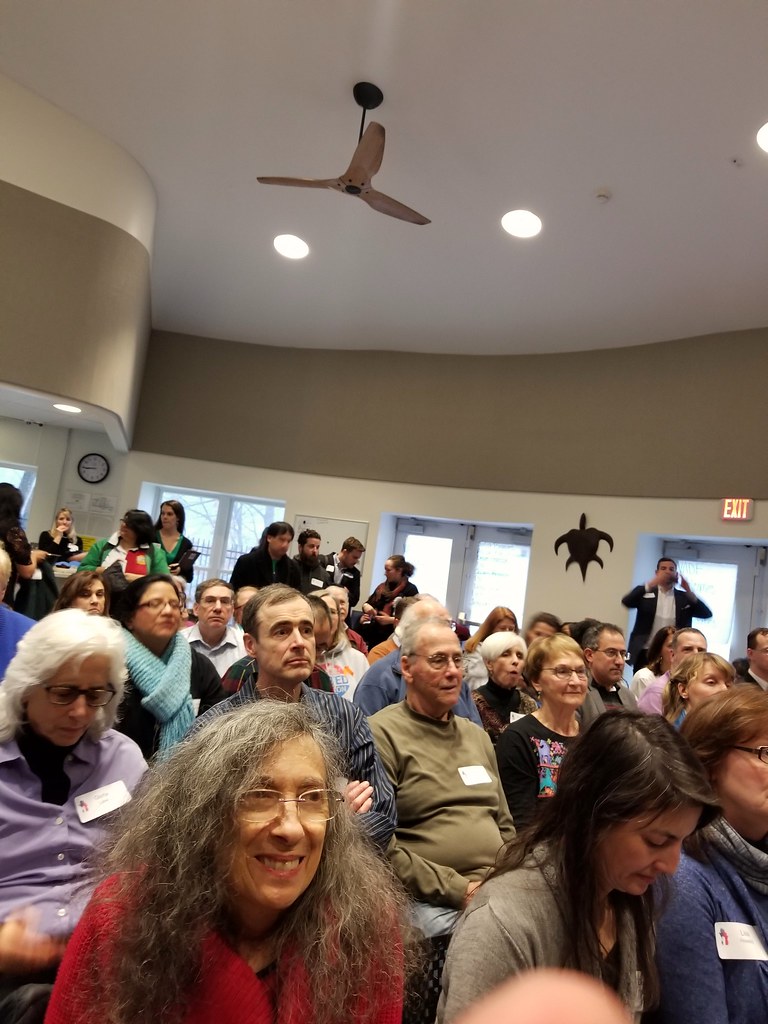