Watch, below, as Virginia State Senators Jennifer McClellan and Scott Surovell rip into Del. Ben Cline (R)’s pointless, punitive, nasty, demagogic “Sanctuary Cities” bill. According to Sen. McClellan, this type of “message bill” spreads fear in the Latino community, “sends a message to certain people that you’re not welcome here.” Sen. McClellan analogized the fearmongering against Latino immigrants to her own family’s history: “As a person of color who had family members who in some cases were scared to walk down the street in Alabama, because if they looked at someone the wrong way, if they drank out of the wrong water fountain, if they sat in the wrong seat on the bus, they could be beaten or hung – or worse…I never thought in 2018 that I would see people in my community, in my kids’ school, on my street, who feel the same fear that my father, my grandfather, my great grandfather, my great-great grandfather felt simply because they were black. And that is why, whether you intend it or not, this bill sends a message we should not be sending in the Commonwealth of Virginia in 2018.”

According to Sen. Surovell: “About one in four of the people I represent in the 36th district were born in another country, and they see legislation like this as an attack on them…We’ve had specific situations in my district where ICE…decided they’re going to come in looking for one guy at some place and they end up walking out with ten. And it’s clearly, I think, illegal, unconstitutional behavior by federal law enforcement officials…I’m concerned about the message this sends…legislation like this sends a really bad message to business about the values that Virginia stands for. We saw what happened in North Carolina last year with regard to the bathroom bill. I think this kind of bill sends a similar kind of message.”

So why is Del. Cline doing this? I’m sure, in part, it’s because he’s running for the GOP nomination for Congress in a deep-red district against even more extreme Republicans. Other than that, Cline and the other Republicans who voted for this crap (note that it passed along party lines, of course) clearly appear to have a problem with immigrants from Latin America (e.g., not from Sweden or Switzerland or whatever). Wonder why that might be…hmmmm.

P.S. Obviously, Gov. Northam should and will veto this horrible bill if it reaches his desk. 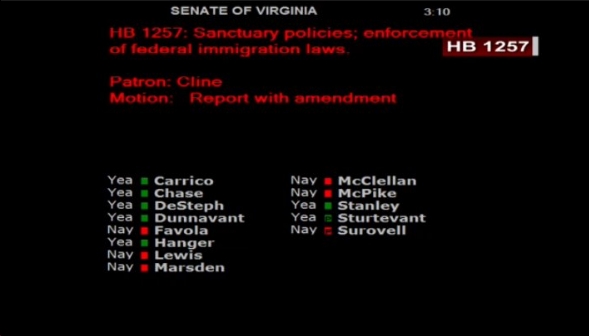 The Virginia Redistricting Commission is working out just greeeeaaat. Thanks to everyone who voted for this, supported it, etc! (snark) https://bluevirginia.us/2021/09/virginia-redistricting-commission-debates-emotionally-sometimes-heatedly-to-what-extent-how-exactly-race-should-be-considered-in-drawing-new-districts#comment-5546634068 h/t @notlarrysabato

The Chair of the @FairfaxDems, the motherlode of Democratic votes in Virginia, is absolutely right - "There's no sitting on the sidelines in this election...Go vote today!" https://bluevirginia.us/2021/09/friday-news-our-constitutional-crisis-is-already-here-the-jan-6-plotters-had-a-mob-political-journalism-needs-a-reset-mitch-is-crashing-america-but-hes-not-nuts-enough-for-trump-maricopa-fake-audit-fi#comment-5546614569

Friday News: “Our constitutional crisis is already here”; “The Jan. 6...