Thousands of students from around the Commonwealth joined hundreds of thousands of other students around the nation to call on our nation’s leadership to lead on gun violence in the wake of Stoneman Douglas’s 17 dead and the all too many others killed by gun violence.

At Mclean High School, like so many other schools, a substantial portion of the student body observed a 17 minute silence. After that, some 100 students marched to nearby Lewinsville Park for a longer demonstration with a number of speakers. 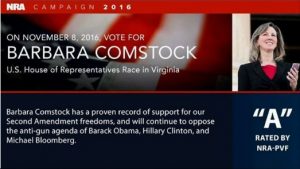 McLean students live in the 10th Congressional District where the member of Congress, Barbara Comstock, has received over $137,000 of NRA donations and a quite solidly consistent NRA A rating (and a  gun sense F with a 0% rating from the Brady campaign).

That stark contrast between the students’ passion and their Congresswomen’s political position is clear in WUSA’s reporting. For example, a young women discussing a Langley High School student killed by gun violence is wearing a “Dump Comstock button”. Most striking is the comment from a student who Barbara Comstock featured on her Facebook page:

I’m here because I was a member of Barbara Comstock’s young women’s leadership program.

She told us to stand up for what we believe in and be strong leaders as women.

So, I am challenging her to be a strong leader and listen to her constituents and actually do something about the gun laws so we can all feel safe in our schools.

Going back to the young woman who discussed the Langley death, she strikingly asked:

When will Barbara Comstock put our lives above money?

Perhaps Representative Comstock will address this student at her next town hall.