Microsoft announced yesterday that Virginia will be the home of “the single largest corporate purchase of solar energy ever in the United States.”

The 315 megawatt (MW) deal, which will cover some 2000 acres with 750,000 panels, is a big deal (“single largest corporate purchase,” after all) and represents over 60% of the planned 500MW capacity Pleinmont project in Spotsylvania County (a few miles south of the Wilderness Battlefield). Pleinmont’s 500MW is:

This is a big deal (on multiple levels) as it could move Virginia from straggler to leader in solar deployment. And it explicitly shows that Corporate America sees solar power is the future — even in “cheap electricity states” (like the Commonwealth), traditionally dominated by dirty electricity sources (e.g., coal), where the primary utility is noted for its historical climate denial, abysmal energy efficiency record, and putting roadblocks against renewable energy, and is heavily invested in fossil fuel infrastructure and resources (especially natural gas resources).

Governor Northam’s statement does justice to the power (both in the individual deal and its signal for the future) of this solar deal.

“Today’s announcement demonstrates that Virginia is quickly becoming a global leader in the clean energy industry. When companies like Microsoft invest in Virginia solar, they opt for clean and reliable energy as well as new jobs in the energy economy we are working hard to build. I am proud that Microsoft is expanding its commitment to solar energy in Virginia, and I look forward to building upon this victory for clean energy and the jobs that come with it.”

Yes — a huge Corporation is signing huge solar deals in Virginia giving real boost to the Commonwealth’s clean-energy economy and moves toward a cleaner grid. What could be wrong with that?

Contemplating this announcement (of a deal that does not, to be explicit, directly involve Dominion Power) brought several things to mind:

To summarize my mixed reaction to the Microsoft announcement:

While Microsoft’s solar electrons might go over Dominion wires (unclear, at least to me, whether this will or will not be the case), this deal is in the wholesale market and — in essence — goes around the utility (and utility-rate) structure.  It is a strong sign of how solar is ever-more (highly) cost competitive and prized by major Corporate players.  It is an indication of how going green (clean energy) can help Corporations make more green (be more profitable).  It is a step forward in Virginia’s move to a clean(er) energy future.

The second half of this post are ‘reactions sparked’ by reading the announcement, even as (re the 5GW target, for example) the deal somewhat is to the side of the actual deal.

After writing this article, I became aware of Advanced Energy Economy’s press release on the project which is worth a read:

Firm paves way for other corporate purchasers in sPower project

RICHMOND, March 22, 2018 – Today, Virginia Advanced Energy Economy (Virginia AEE) hailed the announcement by Microsoft Corp. that it would purchase 315 MW of energy from two new solar energy projects being developed in the Commonwealth. The projects – Pleinmont I and II, which will be developed, owned, and operated by sPower, an AES and AIMCo company – will have a total capacity of 500 MW. Both Microsoft and AES are members of Advanced Energy Economy (AEE), a national business organization, with which Virginia AEE is affiliated.

“This announcement is groundbreaking for advanced energy in Virginia,” said Harrison Godfrey, executive director of the business group Virginia Advanced Energy Economy. “Not only will this investment nearly double the amount of installed solar capacity in the Commonwealth, but with it Microsoft and sPower will also provide a new way for other energy purchasers to buy into, and benefit from, the secure, clean, affordable energy these solar facilities provide.”

In this arrangement, Microsoft serves as an anchor tenant for a project but allows other buyers to procure smaller portions of the output at a competitive price. Such aggregation extends access to advanced energy sources for other buyers, unlocking previously latent demand and creating new markets for advanced energy companies.

Virginia currently has 619 MW of installed solar capacity. Solar, and advanced energy more broadly, has been one of the fastest growing sectors of the economy in Virginia and nationwide. According to the latest Solar Jobs Census, released in February, Virginia has seen 10 percent year-over-year growth in solar industry employment. The advanced energy industry employs 81,000 Virginians, working in energy efficiency, wind, solar, and other technologies and services. 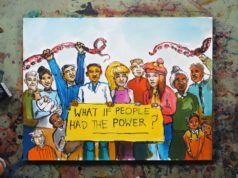