Pruitt not only should resign, he should  be prosecuted for massive corruption.

“From the first Scott Pruitt has conducted himself terribly, without regard for environmental protection or public safety. He has given free rein to lobbyists and industry insiders to sabotage the EPA’s mission. He has endeavored to corrupt the Environmental Protection Agency to place polluters’ profits above Americans’ health and the fate of the planet.

The latest outrage is the news that Scott Pruitt secretly worked out a special deal on condo rent with an industry lobbyist who represents companies regulated by the EPA. He apparently did not report the details of his arrangement to ethics counsel at the EPA beforehand, nor to the public. As he has done over and over again, he showed contempt for transparency, ethical guidelines, and the public interest.

Pruitt must resign. If he refuses to do so he should be fired immediately.” 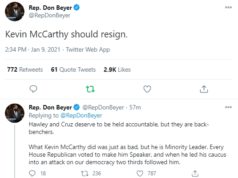