Yes, the 2018 Virginia GOP’s U.S. Senate contest’s likely frontrunner, Corey Stewart, has gone full Alex Jones conspiracy theorist. See below for a screenshot of that lunacy from Corey’s Facebook page. As for Alex Jones, if you’re not familiar with him, check out Alex Jones’ Mis-Infowars: 7 Bat-Sh*t Conspiracy Theories (“Satanists are taking over America”; “Bill Gates is a eugenicist trying to wipe out minorities”; “The government is controlling the weather”; “Hillary Clinton is running a child sex ring out of a D.C.-area pizza restaurant”; “The government is complicit in countless terrorist and lone-gunman attacks”; “Millions of undocumented immigrants illegally voted in the election”; “Former Fox News host Glenn Beck is a CIA operative”). 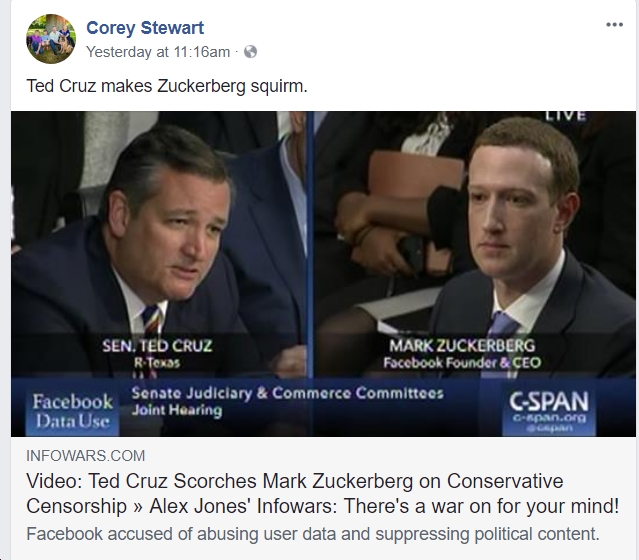 As for David Hogg supposedly being “brainwashed,” neo-Confederate Corey first raised that claim a few weeks ago in a Republican debate, and clearly thinks he has a “winner” here. Sad to say, among the Virginia GOP “base,” Corey might be correct, at least if you check out the approving comments to his Hogg-wild post. The #2-top-rated comment, for instance, is “why is fb media news feed continually referring to this phony, David Hogg, who is a California resident and CNN crisis actor as a Parkland HS, Fla. SURVIVOR??? WHY???” Yep, that’s a Corey Stewart supporter’s comment…with 63 “likes” on it. Shuddderrrr… 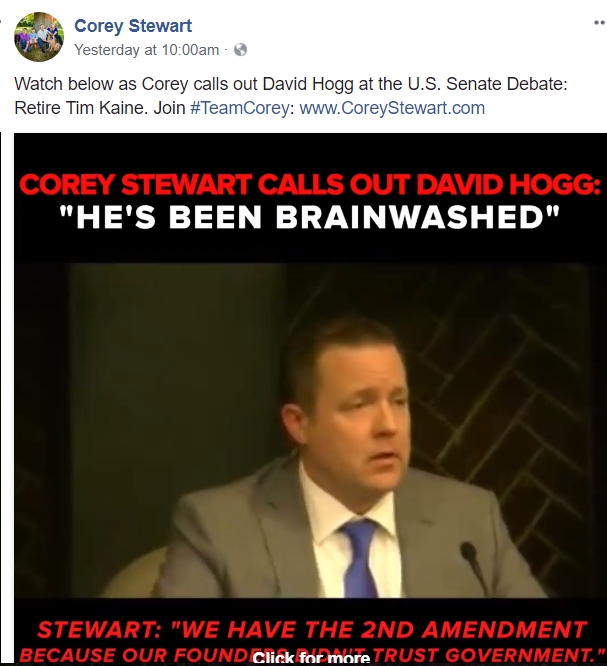