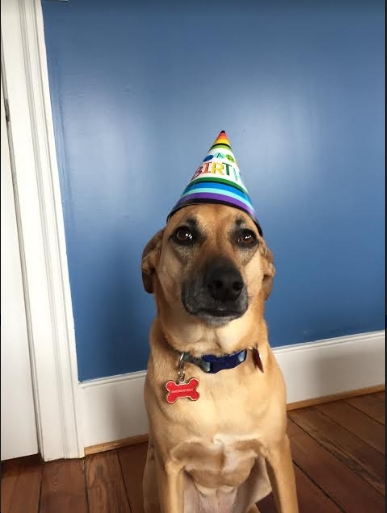 My name is Rula and I’m a rescue dog.  When my dads, Peter and Malcolm, found me in a shelter in Mozambique, I had a nasty case of ear mites and a thick, grey patch of skin on my neck from being chained up.  I was also pretty nervous around humans.  With a lot of patience, my dads were able to heal my physical pain and my spirit.  They eventually brought me back to the United States and I’m super excited to tell you that my dad Peter is running for the Democratic nomination to represent Virginia’s 6th District in Congress.

Republicans looking to keep the status quo should be worried. Peter has bold ideas and the plans and experience to back them up.  My dad gave me a fresh start and he’s ready to help give the Blue Ridge a fresh start too. Here’s how:

I may have been scared of humans when my dads first found me, but now I love meeting new volunteers!  The grassroots movement supporting Peter Volosin is growing every day. If you want to learn more about Peter’s ideas and plans, or if you want to help support his campaign, go to www.votevolosin.com.