I could easily do a post – or multiple posts – every day on the off-the-far-right-deep-end Virginia Republican Party. On the one hand, that would constantly remind everyone how much of an “insurgent outlier” party the former “party of Lincoln” (or even Reagan, for that matter) has become. On the other hand, I suppose it could get tedious – for me and for everyone else.

Still, there are times when something just jump out at me as epitomizing where the Virginia GOP – and the national GOP, for that matter – is at these days. For instance, see the tweet below, which has Sebatian Gorka endorsing Teapublican Shak Hill for the Republican nomination in VA-10. For a quick refresher on Gorka, check out Sebastian Gorka was White House aide while a fugitive from Hungarian justice (“Deputy assistant to president was wanted on weapons charges”), Nazi-Allied Group Claims Top Trump Aide Sebastian Gorka As Sworn Member (“Sebastian Gorka, President Trump’s top counter-terrorism adviser, is a formal member of a Hungarian far-right group that is listed by the U.S. State Department as having been “under the direction of the Nazi Government of Germany” during World War II, leaders of the organization have told the Forward”), Sebastian Gorka May Be a Far-Right Nativist, but for Sure He’s a Terrible Scholar, 5 Things to Know About Sebastian Gorka, Trump’s Jihad Whisperer, Former Trump Aide Gorka Now Writes for the Far-right Website That Published ‘10 Things I Hate About Jews’, etc.

So yeah, the anti-Muslim, anti-Semitic dude endorsed Shak Hill over Barbara Comstock. On the other hand, Comstock has (or at least had in 2016) crazies like Sean Hannity on her side, plus Mark Levin, Newt Gingrich, Rick Santorum, John Bolton, Brent Bozell, etc. etc. So who is more extreme, the VA-10 Republican endorsed by the Hungarian fascist or the one who votes 97% with Trump and who has been endorsed by the aforementioned nutjobs? Tough call for VA-10 Republican primary voters on June 12! LOL 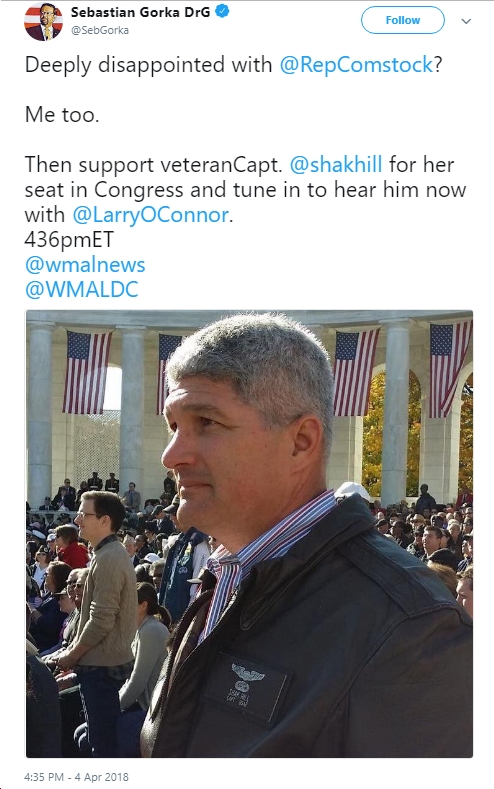