I haven’t done an online/unscientific poll for VA-07 (home of one of Virginia’s greatest embarrassments, Rep. Dave Brat) since mid-March, so I’m figuring that now’s not a bad time to check in again. Note that the last poll had Abigail Spanberger leading Dan Ward by a big margin (90.5%-6.6%). Now, with just 1 1/2 months to go until the June 12 Democratic primary, has anything changed? Let’s find out! I’ll leave this poll open until May 2.

P.S. Just to be 100% clear, since there have been a few questions, here’s how I set the poll so that people SHOULD NOT be able to vote more than once…attempted repeat voters should be blocked by both cookie and IP address. 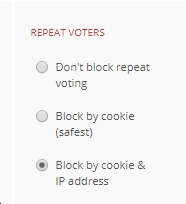