UPDATE: See below for an update, Monday morning, courtesy of the Chesapeake Climate Action Network (CCAN), which writes: “On Sunday, May 20, a group of activists protested Dominion Energy’s annual Riverrock festival to stand against its role in Virginia’s political system and draw attention to the dangers that would come with its proposed Atlantic Coast Pipeline. The activists flew kites with messages opposing Dominion Energy and its proposed fracked-gas pipeline.”

According to Dominion Energy and Propaganda, its Riverrock festival is “a three-day celebration of sports, music and river life in Richmond, VA. May 19-21, 2017.” But according to the folks commenting on the Riverrock Facebook page, it’s something quite different – and far less benign. So far, there are 34 reviews — 32 “1 star” (the lowest), 1 “2 star” (second lowest) and 3 “5 star” (the highest). As for the comments, here are some highlights (bolding added by me for emphasis):

RICHMOND, Virginia– On Sunday, May 20, a group of activists protested Dominion Energy’s annual Riverrock festival to stand against its role in Virginia’s political system and draw attention to the dangers that would come with its proposed Atlantic Coast Pipeline. The activists flew kites with messages opposing Dominion Energy and its proposed fracked-gas pipeline. 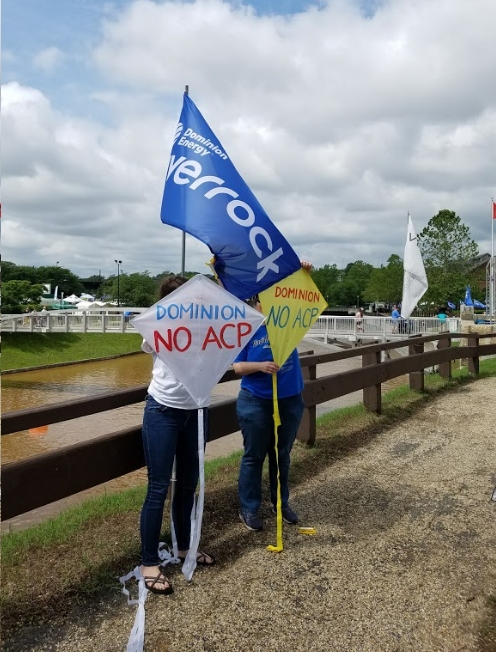 This event took place as Dominion faces increased scrutiny over its energy policies and political influence. The Atlantic Coast Pipeline particularly has garnered widespread opposition across the region. Tens of thousands of Virginia residents have sent petitions to Governor Ralph Northam opposing this pipeline and the similar Mountain Valley Pipeline.

Additionally, the band Blush Face refused to play at the Riverrock festival. The band stated that it “didn’t want to get involved with any kind of river celebration Dominion put on because of their actions and support of the pipeline campaigns and coal ash disposal. Although they claim to give back to the community and pretend to care about our river, we feel that Riverrock is more of a facade. We love celebrating music and everything outdoors, but we don’t love where Dominion’s interests are with those things. They pollute our shared resources and threaten our home for their corporate interest and we don’t want to play at their party.”

Last year,  48 percent of Dominion shareholders voted in favor of a resolution calling on the company’s board of directors to report on how the company will address climate change. This is far more support than similar shareholder resolutions have ever achieved.