From Progress VA/For Our Families:

Virginia Beach. — For Our Families Virginia, a campaign to hold Congressman Scott Taylor accountable for his votes against working families in Hampton Roads, is releasing a new ad campaign to educate Virginians on how the tax bill lines the pockets of wealthiest individuals, shareholders, and corporations at the expense of middle-class families.

The new television ad directly calls out Congressman Scott Taylor for supporting a tax plan that gives 83 percent of the benefits to the richest 1 percent of the wealthiest Americans. The bill also adds $1.5 trillion to the national debt, putting programs such as Social Security, Medicare, and Medicaid at risk.

“Congressman Scott Taylor‘s vote for Trump’s tax scam shows he has no interest in helping the working people of Virginia,” said Cynthia Wright, a home health care provider. “Some of us Virginians could use a bailout because most of their income goes toward paying bills and paying taxes. With politicians like Scott Taylor in power, the rich will keep getting richer and the rest of us will have to pay for it.”

“Thanks to Congressman Scott Taylor, on this Tax Day, corporations and the super wealthy are seeing multi-million dollar tax breaks while working families are left with pennies,” added Progress Virginia Executive Director and For Our Families board member Anna Scholl. “We know growth comes from the middle out, not the top down. But the Trump-Taylor tax scam puts our families at the end of the line. We deserve better and Congressman Taylor should stand up for us by voting to repeal the TrumpTax.” 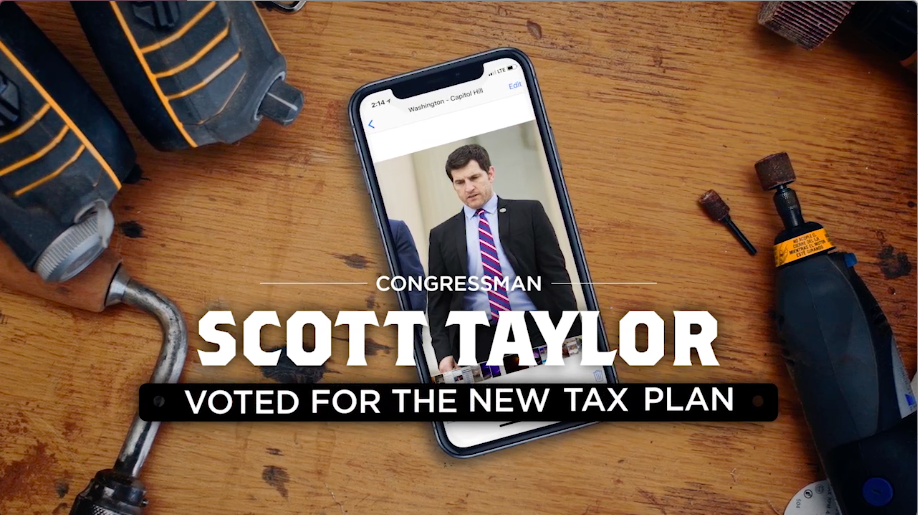 Recent polling shows that a majority of Americans oppose the tax plan forced through Congress by Donald Trump and Congressional Republicans. The new polling also shows that Americans believe that the tax plan unfairly benefits the wealthy and well-connected.

The ad is being released as part of a sustained effort to educate constituents in Virginia’s 2nd Congressional District on Congressman Taylor’s record and point to the harm that his votes in Congress have had on our community. The sustained campaign will be spending seven-figures throughout 2018 to hold Congressman Taylor accountable and has already begun its outreach to voters by holding several events around the district and running a television ad since launching only a month ago.

On a recent Sunday, activists from around the community joined together at Mt. Trashmore during the one-year anniversary of the national Tax March to highlight Congressman Taylor’s vote with “Donny the Tax March Chicken” – an inflatable chicken dressed up as President Trump. A clip of the event can be found here.

On March 28th, For our Families Virginia launched a six-figure ad buy highlighting veterans asking Congressman Taylor to reconsider his support for the Trump Tax Scam. The ad ran across the Hampton Roads media market and featured Kyle Green, a Marine Corps veteran who served in Afghanistan. The previous ad can be seen here.

For our Families Virginia Launched with a rally and press event on March 21st with activists and members of the public in Virginia Beach. The event took place as an anniversary party for the Affordable Care Act and highlighted Scott Taylor’s continual attacks against health care for the nearly 45,000 individuals in our community who depend on its coverage for their lives. A link to the event can be found here.

The ad can be viewed here.

A Commonwealth Kids Credit Would Make Virginia More Affordable for Over 700,000 Families