The following post by neo-Confederate Corey Stewart’s field director, Thomas Dees, sparring with Nick Freitas supporters, really epitomizes the low, low, loooooow level of discourse in the Virginia Republican Party these days. Of course, I’d note that Corey Stewart actually did start all this talk about Republicans being “flaccid,” “soft,” and “weak,” and saying “I feel sorry for their wives.” As for being a racist and bigot, of course we can’t know what’s really in the guy’s heart, but he’s certainly talked like a racist and bigot, including blaming “both sides” for the neo-Nazi violence in Charlottesville. As an added bonus, Stewart has vowed to run a “vicious,” “ruthless” campaign; called for arresting Fairfax County’s sheriff for not being anti-immigrant enough; recommended that Tim Kaine’s son be sent to Gitmo; denied climate science; claimed that there is non-existent “voter fraud” – widespread, at that! – in Virginia; pooh-pooh’ed Russian interference in our elections; called for ending the Mueller investigation; etc.

As for Nick Freitas, he’s referred to Social Security as a “Ponzi scheme”; attacked Robert Mueller; deflected a question about Russian meddling in the 2016 presidential election by talking about…yeah, Ted Kennedy supposedly trying “to directly collude with the Soviet Union in order to try to defeat Ronald Reagan”; argued that climate change is “used as a political football” and that the real answer to this problem (and every problem, basically) is “private property rights”; claimed that gun violence resulted from  “gun-free zones,” “broken homes” and the government policies that supposedly contribute to “broken homes,” “various cultural changes that happened in the 60s [including] the abortion industry,” “the welfare state,” “dismantling families as [they] became more and more dependent on the government,” etc.

I’m not even including Ewwww Jackson in this, first of all because he has no chance of winning, and second because I’ve already covered his insanity ad nauseum over the years. But if I did include him, it would only reinforce my point that the Virginia GOP – including its U.S. Senate candidates – are completely off the deep end and unfit for higher office. 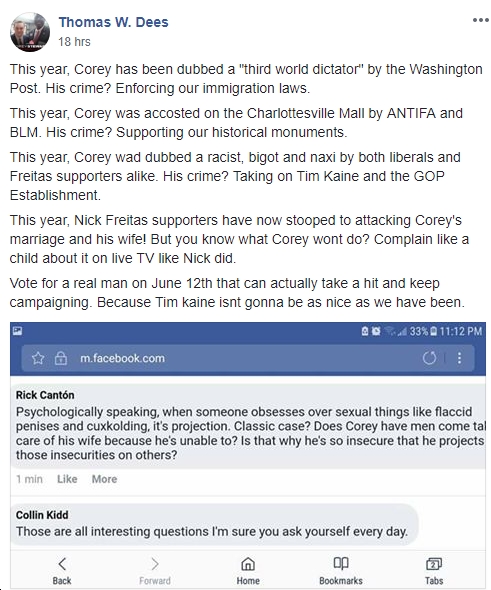