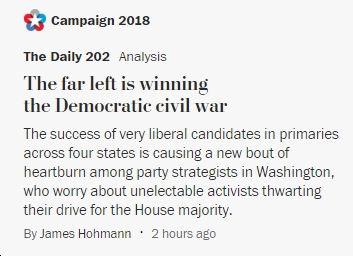 Yet again, the corporate, most decidedly NOT “liberal media” descends deep into self parody. This time, it’s a column by Washington (Com)Post “national political correspondent and author of The Daily 202” James Hohmann entitled, “The far left is winning the Democratic civil war.” Wait, what is that you ask? Did you miss something? Have Maoists, Marxists-Leninists,  swarmed into the Democratic Party recently, without any of us noticing? Yeah, didn’t think so. Yet, according to James Hohmann, the “far left” is upon us, and not only that, it’s winning!!! LOL

First off, let’s get at what Hohmann believes to be “far left.” From his article, a few characteristics include:

As I said, this shit is beyond parody. But sadly, it’s actually published in today’s Washington Post. One good thing about this article, at least, is the comments section. Check out the top-rated comments, which basically all mock and demolish Hohmann.

Last but not least, let me just point out that, as Vox reports, one candidate (Rich Lazer in PA-5) endorsed by Bernie Sanders lost (by a 28%-15% margin to attorney and School Board member Mary Gay Scanlon), while another (Gregory Edwards in PA-7) endorsed by Our Revolution finished third out of three candidates (behind anti-immigration hardliner John Morganelli and Emily’s List-endorsed Susan Wild). Again, is anyone seeing any sign of the “broader leftward lurch among Democrats across the country” that Hohmann  imagines in a malarial fever dream? Nope, me either.

P.S. I wonder how many of Virginia’s Democratic Congressoinal candidates Hohmann would consider “far left,” since I believe almost every single one of them supports some form of path towards universal health care coverage (e.g., Medicare X, single payer), marijuana decriminalization, “universal background checks to buy guns,” etc. Yep, it appears that Hohmann would consider basically every single Democrat running for Congress this year from Virginia to be “far left,” by his laughable criteria.