Lots of drama in Virginia’s Senate Finance Committee this afternoon (yeah – they’re baaaaack! LOL). I didn’t get video of the beginning of it, but I did get a bunch of it (see below), including the dramatic ending. Just the look on Senate Majority Leader Tommy Norment’s face as Senate Finance Committee Chair Emmett Hanger rules his motion out of order and gavels the committee to a close is priceless. Credit for outmaneuvering Norment, who apparently was trying to limit actions the Senate can take on getting Medicaid expansion back into the budget, goes to Sen. Dick Saslaw, Sen. Frank Wagner, Sen. George Barker and Sen. Emmett Hanger. Nice job, gentlemen, for possibly saving Virginia Medicaid expansion, or at least for screwing up whatever nefarious plans the ever-devious Tommy Norment had in store! 🙂

Hanger, after a couple reporters ran after him: “It was a maneuver, I think, intended to prejudice an outcome tomorrow, in that it had been considered twice, reconsidered and was dead, which could have been overriden by a majority vote on the floor I believe.”

@reemadamin: “Sounds like there might be a rule that if something is considered multiple times and dies in committee, it limits how that *thing* can be considered by full Senate. And for everything we know, Hanger is going to propose expansion later today to the full Senate & has support for.”

@reemadamin: “There were audible gasps when Hanger asked Norment what his intent was, and Norment said that they don’t have to explain their intent.”

Thanks to Cindy Cunningham of VAPLAN for this excellent analysis:

Summary of Senate Finance Committee (as I understood, someone correct me if I’m wrong): After over an hour of discussion of the Hanger/Jones amendments (which include Medicaid expansion) and the latest version of the Norment amendments (which do not), a motion was made to report Hanger’s amendments. That vote failed. Then a motion was made to report Norment’s amendments, which passed. The plan, I assume, was for Hanger to then make a motion on the Senate floor when they meet to amend the budget there (where the whole senate could vote, since we have more than 20 votes in support of Medicaid, just not a majority of votes in the finance committee).

Then, in a sneaky move, Norment moved to reconsider the vote on Hanger’s amendments. They were about to take that vote, when Saslaw asked if that would make it “twice considered” in committee, which apparently by Senate rules might have made it impossible to consider it again on the floor. (Maybe, maybe not, since that rule might only apply to single bills, I’m not sure. But, better safe than sorry.)

There was back and forth confusion and arguing about what might happen, and they sort of lost track of which motion they had before them. Hanger tried to ask Norment why he wanted to reconsider the vote, and Norment said “we don’t discuss motives.” And then, Hanger abruptly ajourned the meeting. (Fortunately, a motion to adjourn takes precedent over any other motion being considered.) So that means Medicaid expansion will have to be (and still can be) offered up as a floor amendment. 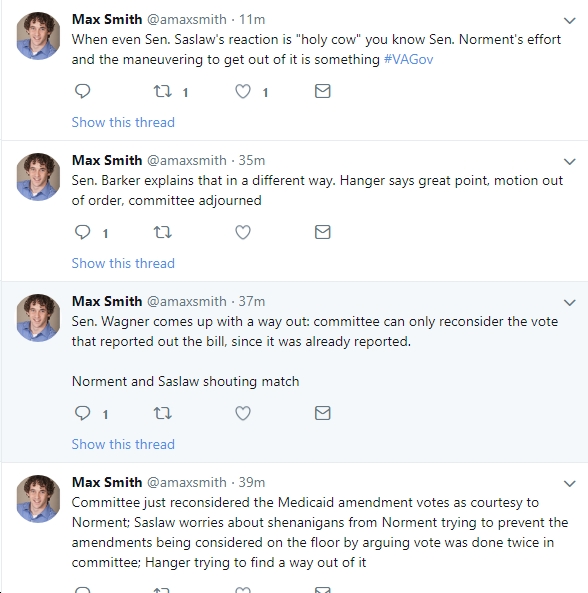 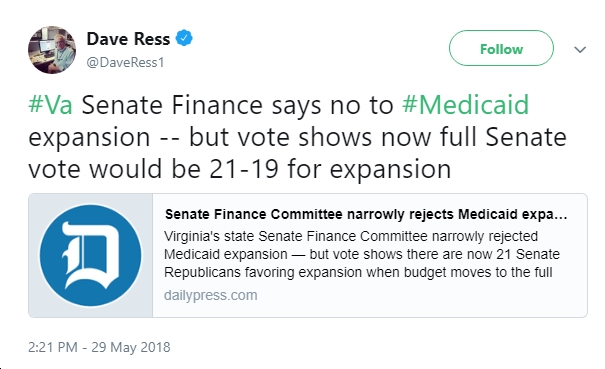