Virginia’s 10th Congressional District is likely, yet again, to be one of the most expensive House races in the nation. Republican Rep. Barbara Comstock is an extremist with long ties into and roles with dirty trick GOP actions and thus long-term relationships with a rogue’s list of Republican elite (from John Bolton to Sean Hannity to Rick Santorum to Newt Gingrich to …) Comstock is an extremely hard-working, adept political operative with a “wonderfully devious mind” who has successfully masked her extremism with seemingly unending event photo streams while not giving the District’s voters the chance to unmask her extremism through open discussions like town halls. 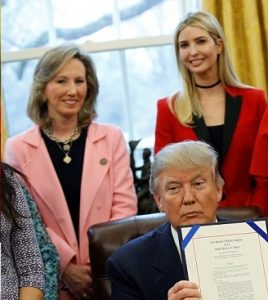 Despite Comstock’s dogged, dirty-tricks and deceitful campaigning style, the 10th is a top-tier Democratic Party target due to its seriously blue tilt in the Presidential election, with the 2016 election 52 percent Clinton to 42 percent Trump.  In 2016, Comstock won by six percent which means that there was a good share of “C&C”: Clinton & Comstock voters. Supposition: many believed that Clinton would win and were willing to have falsely labeled “moderate” Comstock in the House to balance the Democratic Party control of the White House.  Special election after special election has had Democratic Party candidates flipping even deep Red districts Blue.  With the district at 10% Blue advantage and Comstock only having won by 6%, the ‘numbers’ seem clear …

With that sort of risk, one would think that Comstock would have been striving to put meat to the ‘moderate’ fantasy.  The absence of out cries from Comstock over Trump’s trashing the Constitution, violating norm and norm, undermining core institutions (the judiciary, the FBI, the intelligence community), and other outrageous anti-democratic activity suggests otherwise. Her voting record shows otherwise.  In the Trump era, Barbara’s votes are about as much at odds with the wishes of her district as any of the 435 members of the House of Representatives.  Voting over 97% of the time with Trump (and almost all the remaining 3% were symbolic ‘release’ votes where the leadership allowed her to vote against the Party because the bill was going to pass anyway), FiveThirtyEight’s analysis has her a whopping 52% swing toward Trump away from the District’s voters’ generic preferences.

Recent ‘generic’ news suggests that while Comstock’s lock-step voting pattern with Trump might matter, just one vote might be the nail in the coffin to retire Barbara.  The 10th District is wealthy and housing prices are high. Combined, this put 10th District voters in the top tier of combined mortgage interest and state/local tax payments which mean that the Trump tax cut scheme to bankrupt the nation while enriching the wealthiest and send money (and jobs) overseas, which Barbara voted for, hit a high share of the 10th in the gut with its limitations on that deduction.  While GOP mouthpieces have touted Comstock’s support for the Trump tax bill as good while attacking candidates in the 10th’s Democratic party primary for opposing them, just released national polling suggests that this might be a serious miscalculation.

NBC/WSJ poll: in swing House districts, knowing that a candidate supports Trump tax-cut bill makes voters LESS likely to back the candidate by a margin of 12 percentage points https://t.co/493qx2CnZl

Generically, across the country, knowing that a candidate voted for the Trump tax bill reduces their support by 12 percent.  In the 10th, with the mortgage & state/local issue, that propensity might even be higher. It seems plausible that informed voters might be over 12 percent less likely to vote for Comstock on knowing that she voted for the Trump tax scam. With a deep hole to dig out of, could that one vote (amid all of Comstock’s votes lining up to support the Trump agenda) be the nail in Comstock’s coffin?

The winner of next week’s primary to take on Comstock would be well advised to have their team look into this … to make sure that the 10th’s voters are made aware of Comstock’s extremism, are exposed to Barbara’s lock-step movement with the Trump agenda, and know about Barbara Comstock’s vote for the Trump tax scam.

TAX DAY REMINDER to Virginians: the GOP Wants to Raise Your Taxes