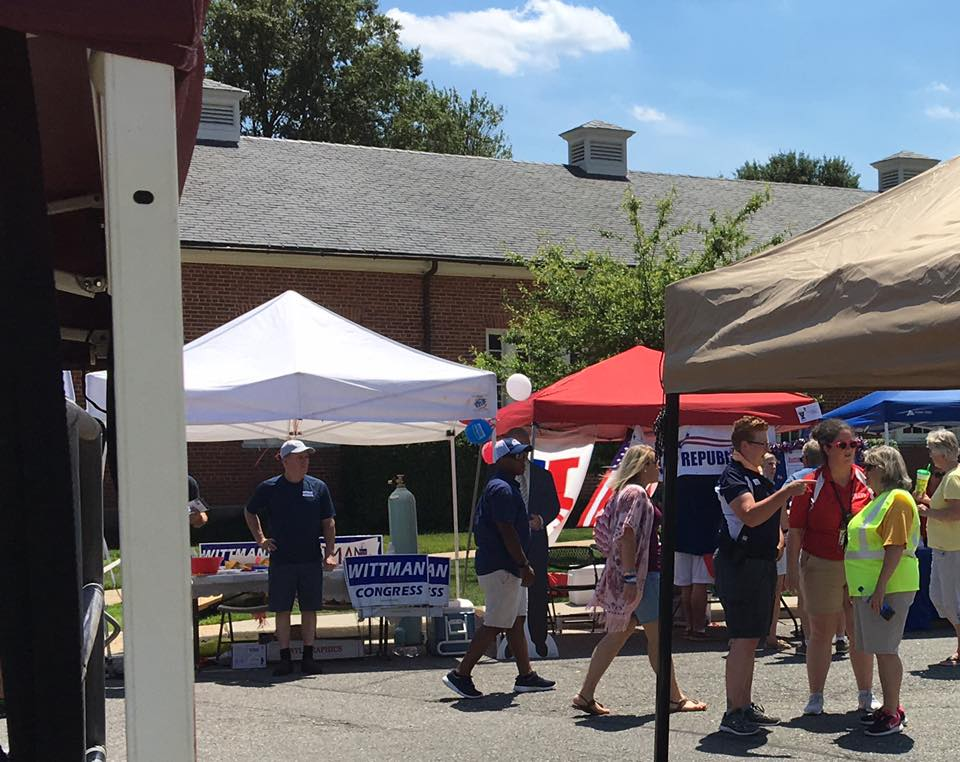 by Kirsten O’Nell (Note by Lowell: I wasn’t there, so I can’t vouch for this firsthand, but the author said it was ok to post it here, and it seems very credible to me. Also, with regard to the photo I used to illustrate this post, believe it or not it’s an actual photo…almost seems like a metaphor or something – lol. Photo credit: Carey Yang.)

Today at the Ashland Strawberry Festival, I saw Rep. Rob Wittman (VA01), so I asked him about his position on separating children from their parents at the border and…wow.

First he said criminals are coming into the country exploiting children, so we need to determine whether they are families or not. I repeated this back to him and he said, “yes, the majority are criminals before coming into this country.” This is factually incorrect and shouldn’t be the basis for separating young children from their parents and putting everyone in prison.

He then said they’re now enforcing the law of the land. I told him previous administrations didn’t separate families like this, so something changed. He said again they’re now enforcing the law. I said people coming across the border are committing a misdemeanor, which usually doesn’t mean jail, but the DOJ is prosecuting it as a criminal case. There are fundamental differences here. He disagreed and said again the laws haven’t changed.

Wittman then said we do the same thing to American families, when a parent goes to jail we’re separating them from their kids. To which I responded, “Jail is temporary and they can be bailed out and be reunited; these kids are being imprisoned for months.” He said the kids aren’t in jails, they’re in detention centers. I immediately said, “But they aren’t allowed to leave.” Wittman, “Of course not, we don’t just want kids roaming by themselves.”

I asked what he planned on doing and he said he’s proposing legislation that would require them to figure out the status of the parents within 48 hours. I asked the status of that legislation and he hedged, saying there’s a number of bills up for debate next week and the week after, including things on DACA.

I couldn’t take any more lies, I was shaking with so much anger at this point. So I ended it by saying I hoped he could sleep at night knowing he’s willfully separating children from their parents.

Everyone, please look up your local politicians so when you see them out in campaign mode, you can ask the tough questions. Wittman isn’t even my representative but we all have a duty to demand answers from those in power.