Serious question: Is Rep. Scott Taylor (R-VA02) completely losing it? Or was he always the petulant man-child he’s acting like right now? Because…I mean, just see below for Taylor’s bizarre screeds – both in this morning’s Virginian Pilot and also on Twitter – and decide for yourself.

Let’s start with the Virginian-Pilot article (see screen shot below), which reports on a rally for women’s healthcare and reproductive freedom this past Monday at Just Cupcakes in Virginia Beach. Note that the place was packed with VA-02 voters eager to hear from Sen. Tim Kaine (see photos at the end of this post). Also note that Sen. Kaine and VA-02 Democratic nominee Elaine Luria appeared together proudly, in stark contrast to Republicans like Rep. Scott Taylor, who clearly are ashamed and/or freaked out about being associated with the disaster at the top of the Virginia Republican ticket this year: neo-Confederate Corey Stewart, who spends his time hanging around white supremacists and anti-Semites.

So anyway, as you can see from the following screenshot, Rep. Taylor isn’t happy AT ALL that Democrats are asking him – perfectly reasonably, I’d add – whether he supports Corey Stewart, rejects Corey Stewart, will/won’t campaign with Corey Stewart, or what. According to the Virginian-Pilot, “All that talk is making Taylor angry.” So angry, that he says he doesn’t “give a s— about Corey Stewart,” that supposedly “no one cares, except for a small teeny amount of people you met at the cupcake place” [note: Taylor really talks like that — the redundant “small teeny,” the grammatically incorrect “amount” instead of “number,” also the lie that the “cupcake place” wasn’t packed with people]. Except that if “no one cares,” then why is Taylor SOOO sensitive about this basic, simple political question regarding his support – or lack thereof – for his party’s U.S. Senate nominee?

But wait, it gets worse! Taylor then launches – unprompted – into a bizarre riff about how he can’t be a racist (which nobody even claimed he was!) because “My son is named after a black guy” and because “I’m a military guy.”

HUH??? Can this get any wackier? Check below the screen shot from the Virginian-Pilot for more… 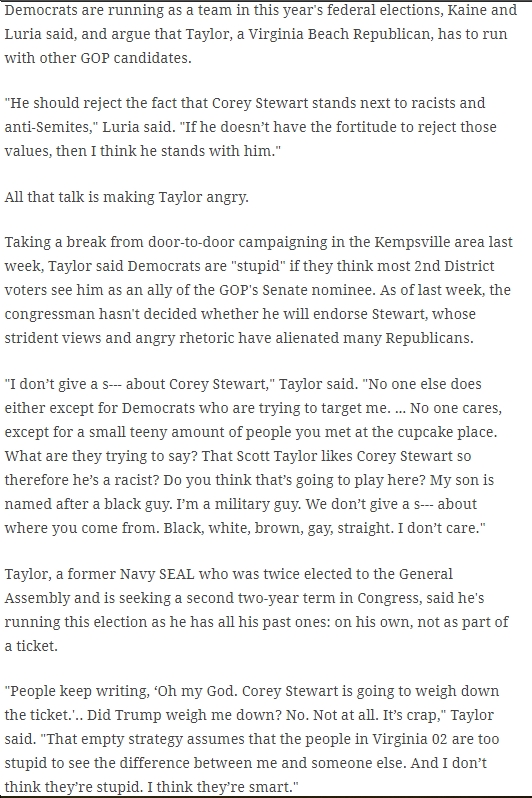 Next, we have the Virginia Beach Democrats – headed up by “Just Cupcakes” owner Carla Hesseltine, by the way – tweeting out a photo this morning (at 9:54 am) of Scott Taylor and Corey Stewart signs – and Scott Taylor himself – right next to each other at the Scott Taylor booth. So I guess we have our answer, finally: as the VA Beach Democrats put it: “If pictures are worth 1,000 words, these images clearly highlight that @Scotttaylorva & @CoreyStewartVA will be campaigning together. Thank you so much for the clarification guys!” LOL 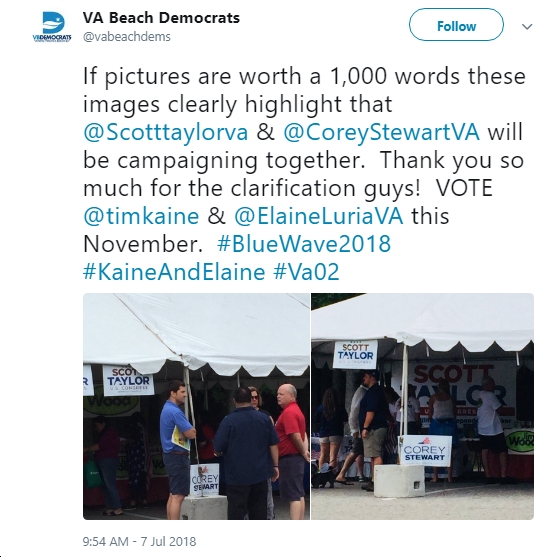 So that REALLY pissed off the thin-skinned Taylor, provoking him into what DCCC Communications Director Meredith Kelly describes (see screenshot below) as a “convoluted screed.” In said “screed” (later this morning, following the VA Dems tweet), Taylor rants about something that happened three years ago involving one veteran’s military service, which Taylor then uses to attack Democratic nominee Elaine Luria, another veteran whose service, as Meredith Kelly notes, “lasted 20 years & culminated with her as a Navy Commander.” As Kelly adds to Taylor, “Pretty gross. And also, have to say, you seem quite nervous!”

In sum, Rep. Scott Taylor is clearly freaked out by the thought of having to run “down ballot” from neo-Confederate Corey Stewart, or even to answer simple questions about his support for Corey Stewart – and is flailing around like a drowning man trying to get out of this mess. If nothing else, Taylor demonstrates clearly that his temperament is completely unsuited for High School Class President, frankly, let alone Congress! Fortunately, come November, VA-02 voters don’t have to be embarrassed by the petulant Taylor anymore, as they can replace him with someone who will actually do their district proud – former Navy Commander Elaine Luria. 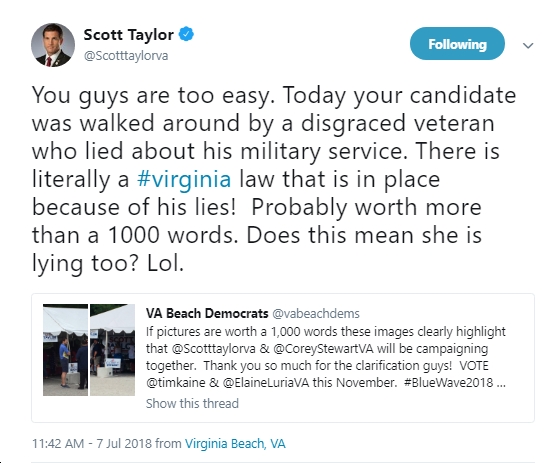 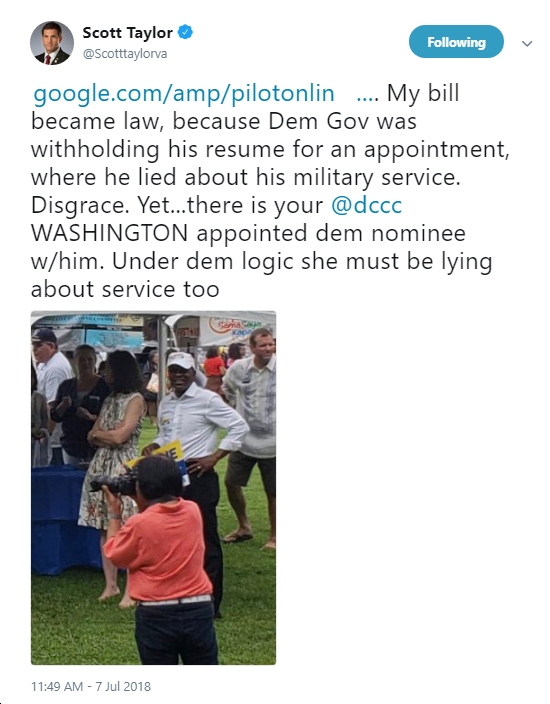 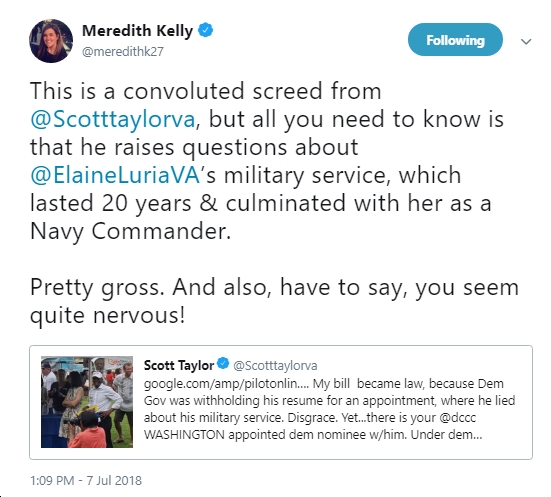 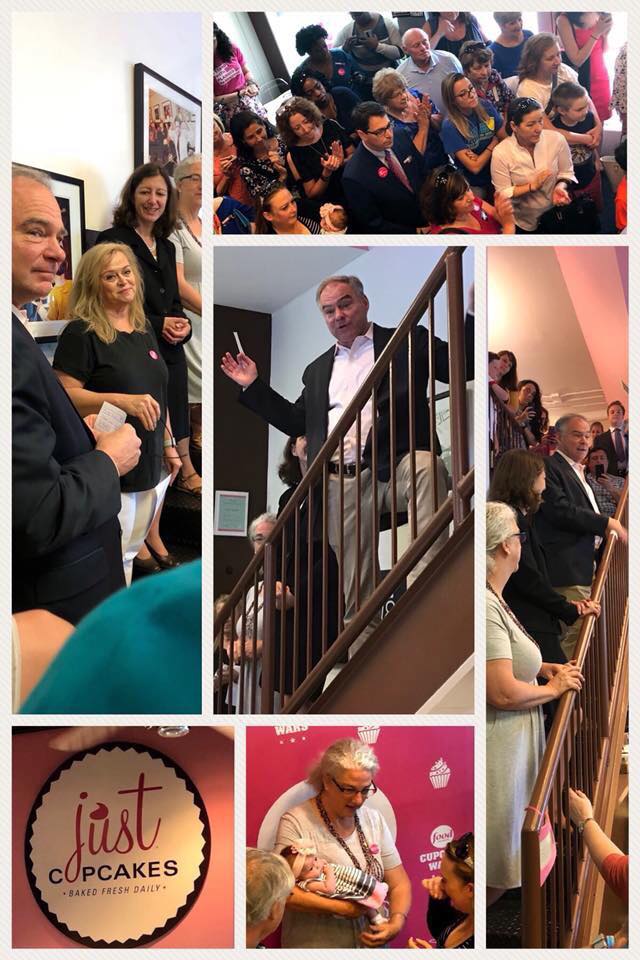 VA-02 GOP PRIMARY TROUBLE: “How Can You Vote for a Two-Time Loser, Bro?”