VPAP is out with 2018 Midyear Campaign Finance Reports, and there’s a lot of interesting information. See below for screenshots, as well as my comments on these numbers.

But first, I’ve added up numbers for Democrats and Republicans and as far as I can determine, Virginia Democrats raised about $800,000 more than Virginia Republicans (about $3.9 million vs. about $3.1 million) – counting Leadership and Party Committees, plus individual State Senators and Delegates – from January 1 to June 30, 2018. Where Democrats gained the advantage was in two main areas: 1) Gov. Northam, who raised over $650,000 during the first half of 2018; and 2) a huge advantage by DPVA ($242k) over the Virginia GOP (just $4,740!). Also, the House Dem Caucus – under the leadership of David Toscano, Charniele Herring, Alfonso Lopez, etc. – kept pace with the House GOP, while the combo of the Virginia Senate Dems (Saslaw et al) and the Joint Senate/House Dems more than kept pace with the House and Senate GOP.

With that, here are the numbers…and a few more comments.

One thing that jumped out at me from the Leadership and Party Committee numbers (see screen shot, below) is that Gov. Ralph Northam, despite not being able to run for reelection, seems to be going hard on fundraising. This could be very helpful to Democrats’ efforts at taking back the Virginia House and Senate next year. Also, I’d note that if Dems do take back the Virginia General Assembly, Gov. Northam could be in position to sign a TON of great legislation in his final two years in office.

Another thing that jumped out at me is that AG Mark Herring doesn’t seem to be gearing up to run for reelection – or for governor – in 2021. I mean, maybe he is, but these numbers ($38k combined) are certainly not ones you’d expect from someone who is burning to be Virginia’s next governor. Justin Fairfax, in contrast, appears to be gearing up for 2021, not just in terms of money but also in political activity level… 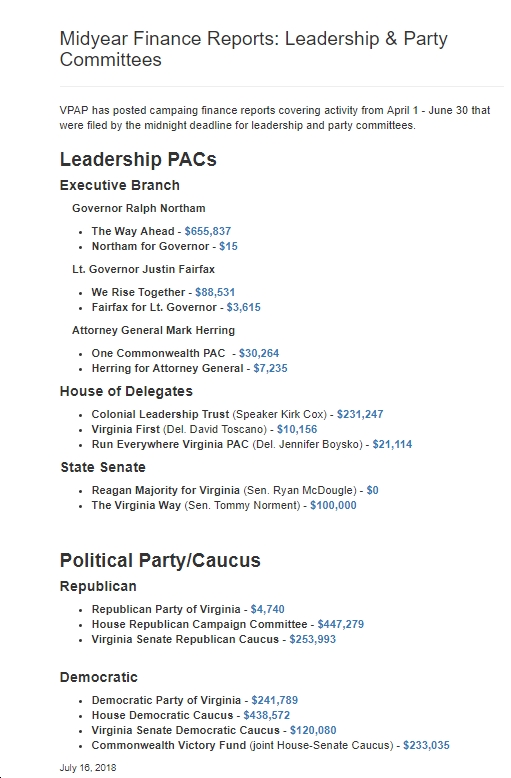 A few interesting things jumped out at me from the House of Delegates numbers: 1) Del. Tim Hugo (R-40) isn’t messing around, outraising his likely Democratic opponent Donte Tanner by an enormous 20:1 margin; 2) Speaker Kirk Cox is raising a lot of money, although not as much as Tim Hugo, but certainly far more than anyone else in his caucus; 3) several Democratic freshmen – Danica Roem, Chris Hurst, Elizabeth Guzman, Debra Rodman, Dawn Adams, Cheryl Turpin, Jennifer Carroll Foy, Kathy Tran, Schuyler VanValkenburg, etc. – are clearly gearing up for reelection by raising a lot of money – nice job!; 4a) billionaire Michael Bills cut a lot of big checks ($10k, $5k) to freshmen delegates and other House Dems; 4b) Bills’ wife, Sonjia Smith, also cut a lot of big checks; 4c) “Clean Virginia,” which is funded by Bills, also cut some big checks; 5) Del. David Yancey (R) is raising a lot of money in preparation for what should be a rough rematch against Shelly Simonds (D), who he defeated by one vote after a highly contentious and controversial recount last year. 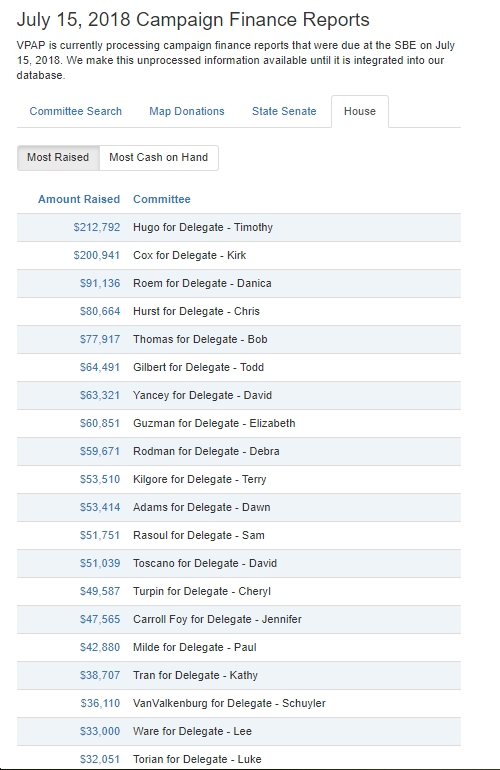 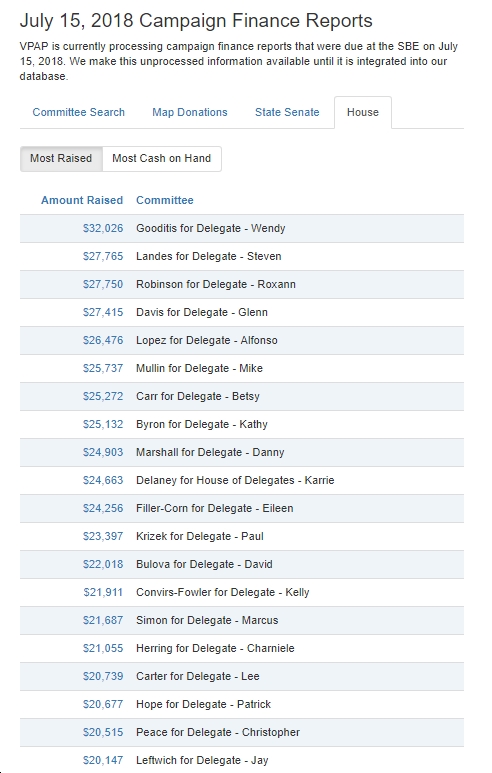 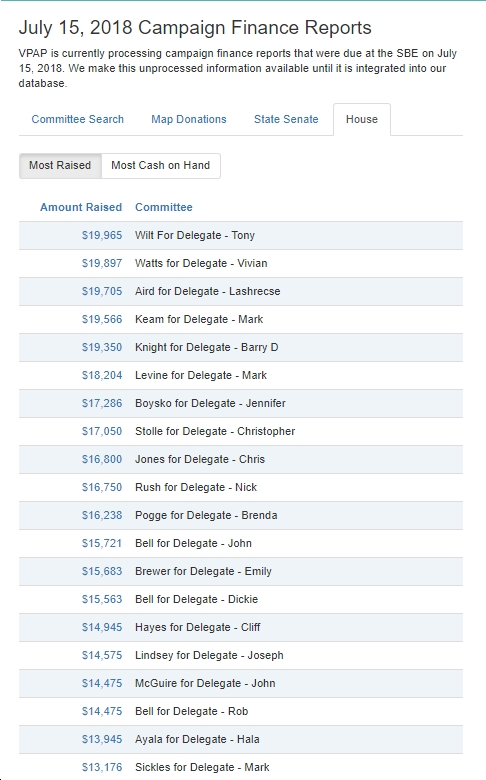 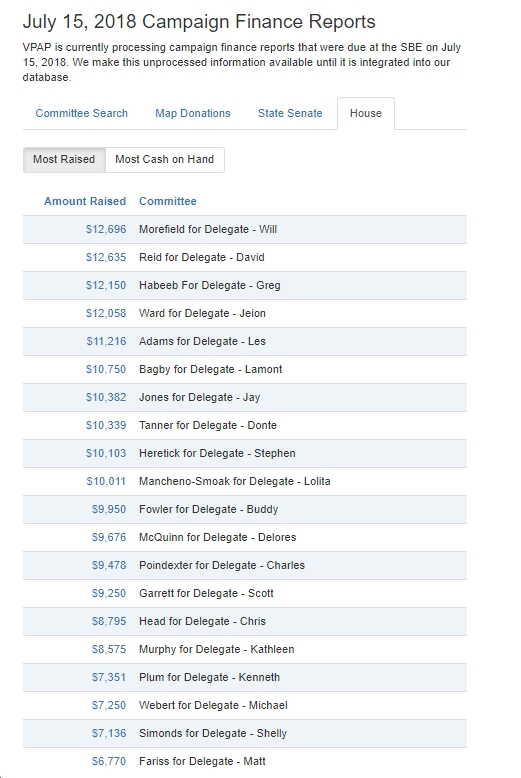 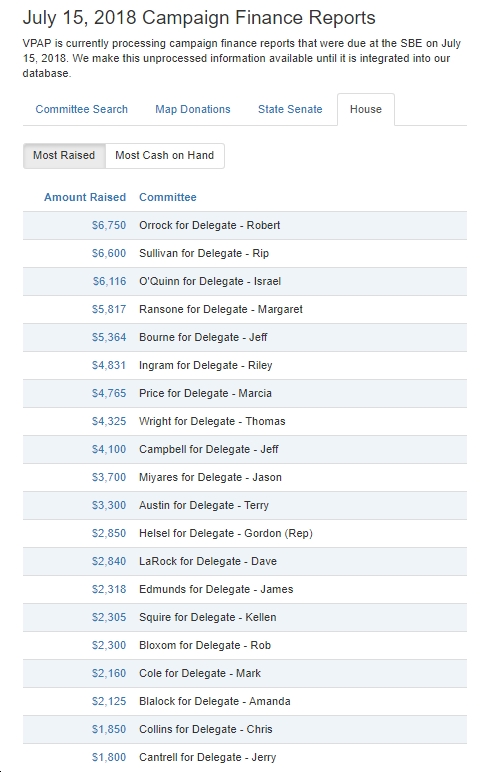 Also jumping out at me: Democrat Suhas Subramanyam – who was running for State Senate (to take on Sen. Dick Black), but apparently has decided instead to run for Del. John Bell’s seat (assuming Bell runs against Black) raised a ton – impressive.

What jumped out at you? Let us know in the comments section. Thanks. 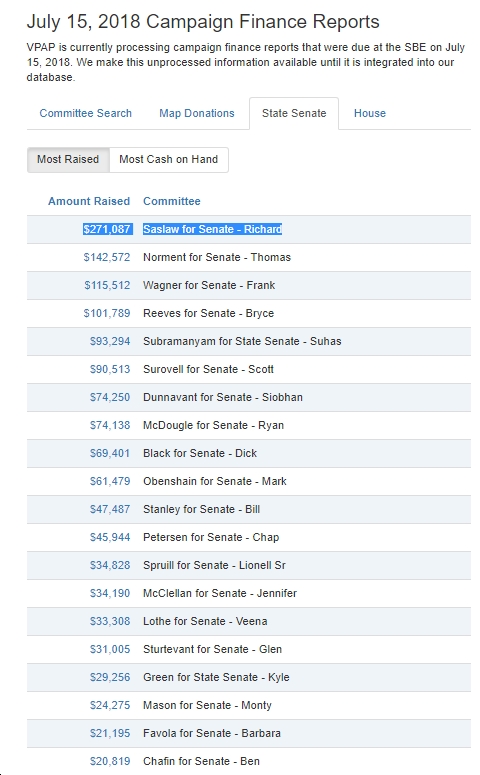 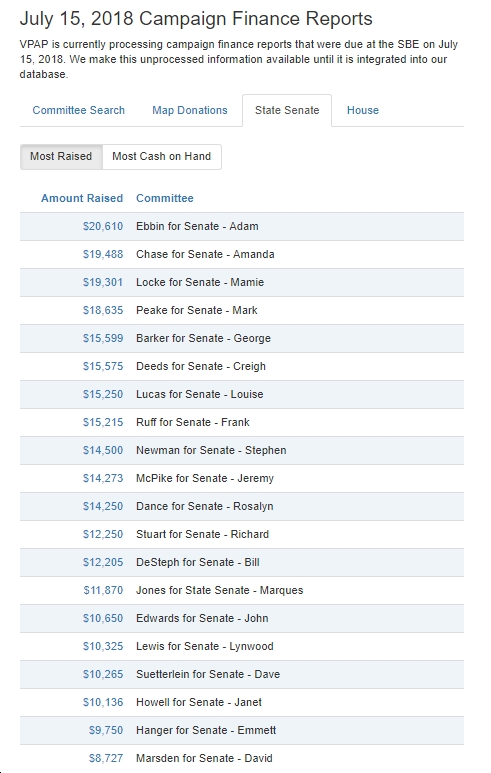