FiveThirtyEight.com is out today with its 2018 forecasts for the 2018 U.S. House of Representatives. There are three variants on the forecast – “Lite” (based on polling), “Classic” (adds in “fundamentals” like fundraising, past voting in the district, historical trends, etc.) and “Deluxe” (adds in experts’ ratings). The bottom line, nationally, is that Democrats have a good shot at taking back the House — 69% in “Deluxe,” 75% in “Classic,” 68% in “Lite.” Also worth noting, before people jump in and claim that it’s all b.s., that nobody knows anything at this point, etc., is that FiveThirtyEight claims a VERY high degree of accuracy for its forecasts, even 100 days out (see graphic, below). So…believe the forecasts or not – and of course a LOT could happen between now and November 6 – but this seems like a decent baseline forecast to consider as we head towards Labor Day weekend. 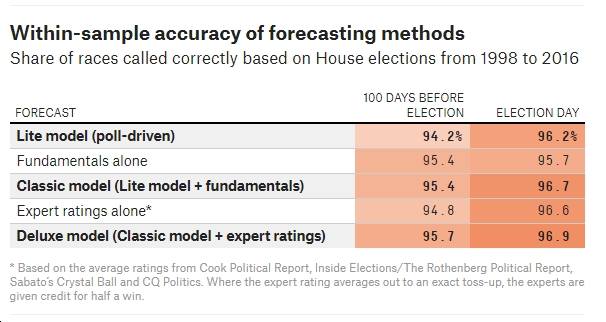 With that, here are the FiveThirtyEight forecasts for House of Representatives races in Virginia. My comments will follow…

So, basically, there are four districts that are somewhat competitive, according to FiveThirtyEight: VA-02, VA-05, VA-07 and VA-10. Personally, I think that VA-02 is much more competitive than FiveThirtyEight makes it out to be, particularly given the scandal unfolding over Scott Taylor’s possible involvement in petition fraud. Regardless, I believe that Democrat Elaine Luria has a much better shot than the “Classic” and “Deluxe” versions of the model are showing, and probably a better shot than even the “Lite” version indicates. I also do NOT believe that VA-05 is more competitive than VA-07, nor do I buy the Dave Brat “Lite” forecast (83.2% shot?!?) at all. As for VA-10, my guess is that Wexton is either at or above the “Deluxe” forecast (77.2% shot).

Anyway, those are my thoughts…how about you?

US House Votes for Continuing Resolution to Keep Government Open; All Virginia Dems Vote Yes, All Virginia Rs Vote to Shut Down the Government https://bluevirginia.us/2022/09/us-house-votes-for-continuing-resolution-to-keep-government-open-all-virginia-dems-vote-yes-all-virginia-rs-vote-to-shut-down-the-government

We'll see shortly, but given how extreme they are, it's highly likely the four Virginia Rs voted to shut down the government. Do NOT put these anti-government nihilists in charge! https://bluevirginia.us/2022/09/friday-news-what-if-were-already-fighting-the-third-world-war-with-russia-corrupt-trump-appointed-judge-bails-trump-out-of-special-master-plan-gop-war-on-student-debt-forgiveness-begin#comment-6000203110 h/t @RepDonBeyer