In my series on “How Trump’s Catastrophic Presidency Could Be Made into Good News,” I have been arguing that the Democrats should be making their campaign in the 2018 midterms about the need for the nation to take power away from this Trump Party in order to win the current ongoing battle over whether the United States will remain a free and democratic society.

It seems pretty evident that a great many Democrats want to steer their campaigns away from any such direct confrontation with the central political reality — and national crisis — of this moment. They want instead to campaign on “winning” issues that touch people’s lives in concrete ways– like health care.

Despite the fact that it is clear as can be that the Democratic overperformance in the various special elections held since Trump’s appalling presidency began is the result of how activated a great many people are to oppose Trump and to reject the Republicans for failing to hold him accountable, a lot of Democrats seem to want to campaign as if that’s not the main thing going on in America today.

Those Democrats seem to prefer relying on the ongoing news to keep that anti-Trump and anti-Republican pot boiling, while they campaign on “positive” issues of the kind that would be key in normal political times.

The disinclination of these Democrats to run the kind of campaign I’m calling for may be wise. In some cases, a good argument for that approach might well be made.

But there are serious reasons to suspect that this cautious approach to this Trump crisis is one more manifestation of the mistake Democrats have been making for years– shying away from confrontation, pretending that one of the major stories in American history is not happening.

This major story — the turn of one of America’s two major political parties toward the darkness of consistent dishonesty and destructiveness — has been visible to me since 2004. As has been the failure of Liberal America to respond to it appropriately. It is that avoidance that led me to run for Congress against Bob Goodlatte in the 2012 election.

The first problem is the “Elephant,” in this case a Republican Party that had become dangerous to America like no major American party at least since the Civil War, and for which Bob Goodlatte was a perfect representative, being the party hack and mouthpiece for the deceptive Republican talking points that he was (and has remained).

The second problem contained in the idea of “the Elephant in the Room” is that the people in the room with the Elephant are failing to talk about the problem that needs to be brought out in the open and dealt with. And in American politics since at least 2004, the people in the room guilty of that failure to discuss the big, big problem right in front of them has been the Democrats. 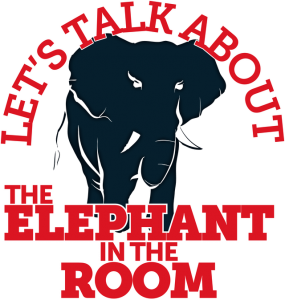 So my campaign was a critique of both parties: the one that’s a problem, and the one that makes itself a part of the problem by its failure to confront the other.

So I have my serious doubts about how much those Democrats taking their cautious path of avoiding confronting the central and truly historical political issue of our times are acting on the basis of political wisdom. After all, that’s what they did in 2010 and 2014, with terrible consequences for the Democrats and for America, too. That failure to “Press the Battle” enabled the Republicans to reap rewards for the very things for which they should be punished.

And as for relying on the Trump-kindled fire of Democratic activism to be sufficient to give us the Blue Wave we need, consider this: while people like us –who already recognize what an atrocity Trump is, and how indefensible the conduct of the Republicans in Congress has been — are fired up by the news we read and hear, a great many Americans are not getting that news.

And we need as big a Blue Wave as possible.

As big as possible because the goal is not just to win control of the House, but to use this opportunity to destroy as much as possible a political party that has gone off the deep dark end and that must be driven into oblivion in its present form.  As big as possible means not just what can be accomplished by Democrats who are well-informed, know the score, and are already activated.

And as big as possible because if the moral bankruptcy of the GOP can’t be shown to people NOW, it’s hard to imagine there will be a better time. So strike while the rot is ripe.

Making the most of this opportunity means going after more than just the highly motivated Democrats who have been driving the Democratic gains in special elections. It means reaching out to move the swing voters, the low-information voters, and the principled Republicans (maybe 10% of their voters) who are not happy with what their party has become.

It is in this context — i.e. the context in which a broad swath of the American electorate must be activated to transfer power from the Republicans to the Democrats, and in which a great many Democratic candidates are likely to be unwilling (for good reasons or bad) to make the anti-Trump and anti-Trump-Party pitch that needs to be made — that I would like to put forward a proposal.

I propose that alongside the usual campaigning by candidates, there be formed a separate campaign by people who aren’t running for office, but who comprise a special, and potentially important group of prominent American citizens with possible credibility with voters who might vote Republican but might also be persuaded to vote Democratic.

I am referring to those prominent life-long Republicans — like Bill Krystal, George Will, Jennifer Rubin, Joe Scarborough, Max Boot, Steve Schmidt…– who have already spoken out about the need for voters this year — even Republican voters —  to vote Democratic. To save our constitution, our democracy, the rule of law.

“Patriots Must Vote Democratic this Year”

Those Democrats who don’t want to be too closely associated with the challenging news that the Republican Party is morally bankrupt could then stick with their “winning issues.” While at the same time, other people — lifelong Republicans — do the work of getting the message out to the general American public that all patriotic Americans should vote to support a Blue Wave.

I will propose — in the next installment — a way for them to generate headlines all across the nation to get that message in front of the general American public. And to do so with a kind of credibility in the eyes of many voters that Democrats could not readily achieve.