Of course, it’s tough to hide stuff you’ve posted on social media. In the case of Rick Shaftan – whose firm (“Atlantic Media & Research”) Corey Stewart has paid $113,000 so far – he has a long history of insulting people with intellectual disabilities. For instance, see the following tweets, which basically speak for themselves. Also keep in mind, as you’re perusing these nasty, offensive tweets, that Corey Stewart has not fired Shaftan or even repudiated his views.

Which means…what? That Corey Stewart agrees with Rick Shaftan? That Corey Stewart simply doesn’t care one way or the other? What? At the minimum, it shows horrendous judgment on Corey Stewart’s part – yet again (for other examples, see After pro-white rally in Charlottesville, Stewart says it’s ‘time to stop apologizing’, Virginia politicians of all stripes condemn white nationalists — except one, Virginia US Senate candidate previously paid anti-Semitic, anti-Muslim figure for fundraising list, GOP Senate nominee Corey Stewart endorsed Paul Nehlen months after he shared white nationalist content, etc, etc. With that, here are a few of Shaftan’s tweets, in which he repeatedly calls people “ret***s” and “bimbos.” 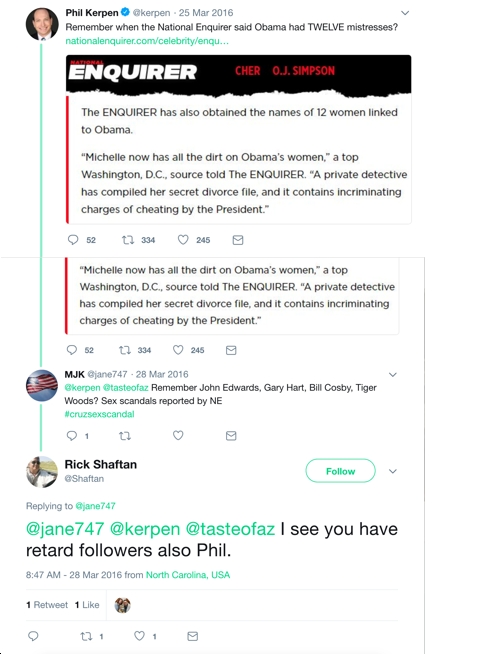 President @BarackObama: "Today, a jury did the right thing. But true justice requires much more" https://bluevirginia.us/2021/04/virginia-elected-officials-react-to-guilty-verdict-in-chauvin-case-george-floyds-life-mattered-justice-has-been-served#comment-5352718138