Should Virginia move the date of its primary elections from the second Tuesday in June, when they’ve been held for decades, to the third Tuesday in June? As you can see from the following email (at the bottom of this blog post) by Fairfax County Electoral Board Secretary Kate Hanley to the Fairfax County Board, Fairfax School Board and Fairfax County’s delegation to the Virginia General Assembly, there’s at least some sentiment to do just that.

What’s the reasoning here? According to the letter, there appear to be three main arguments made: 1) “heightened security concerns in the schools when students are present” due to “recent events across the country”; 2) challenges of reconciling security measures with “free access to the polling location” and avoiding any “possibility of voter suppression”; and 3) difficulties with parking and “end-of-school activities” “imped[ing] voter access in at least 10 schools.” Concerns about “depressing voter turnout because school is out and vacations are underway” are also mentioned, but dismissed, on the grounds that “student safety should be a higher priority, and absentee voting is a viable alternative.”

Let’s take these one at a time. First, I don’t dispute the “heightened security concerns in the schools when students are present,” given mass shootings in recent years in Parkland, FL; Santa Fe, TX; Newtown, CT; Virginia Tech; etc. Having said that, I think it’s important to note that Despite Heightened Fear Of School Shootings, It’s Not A Growing Epidemic (“Schools are safer today than they had been in previous decades”) and also that, to my knowledge, there has been absolutely zero connection between school shootings and election day activities. So I’m not sure what actual problem exists regarding holding primary elections in schools – something that’s been happening, uneventfully, for decades – that needs to be solved.

Second, I simply don’t understand why we can’t figure out ways to provide adequate, appropriate security at schools while maintaining free access of voters to the polls and avoiding voter suppression. Has anyone heard of this being a problem in previous Virginia primary elections? How about in other states?

Third, I also don’t understand why we can’t manage traffic and parking at 10 Fairfax County schools sufficiently, or why this problem merits having to change primary election day in the entire state. This one seems to me like the weakest of three weak arguments.

I’d also raise the possibility – although I haven’t found strong evidence one way or the other, other than anecdotal – that moving the primary to the Tuesday after schools close for the summer might result in lower voter turnout, as families with kids take a bit of vacation, get into their summer schedules, etc. I’d certainly want to look carefully at any research that’s been done on this subject before making any drastic moves here in Virginia. In my view, we absolutely need to be doing everything we can to encourage HIGHER turnout, not discourage it in any way. That could mean moving elections to the weekend and also encouraging more voting by mail, early voting, absentee voting, etc, etc. Plus, of course, we need to get rid of onerous, ridiculous voter ID laws that serve no purpose other than to make it harder for people – particularly people of color and those with lower incomes – to vote.

The bottom line, in my view, is that we do not want to do anything that might, in any way/shape/form, lead to less voting – or in any way result in an electorate that skews in a less diverse, less representative direction (something that could, by the way, theoretically benefit incumbents). And we certainly don’t want to do any of that unless there’s a serious problem that needs to be addressed, and that can’t be addressed any other way. In this case, I’m not seeing what that serious problem might be, or why legitimate anxieties can’t be assuaged in other ways. Your thoughts?

P.S. Note that there was a House of Delegates bill in 2015 that would have moved Virginia primaries from the second to third Tuesday in June, but it was “left in Privileges and Elections Committee after initially being reported from that committee by a 14-8 vote. There also was a State Senate bill in 2014, which was defeated by a 17-23 vote – all “aye” votes Republican and all Democrats voting “nay” – on the floor. 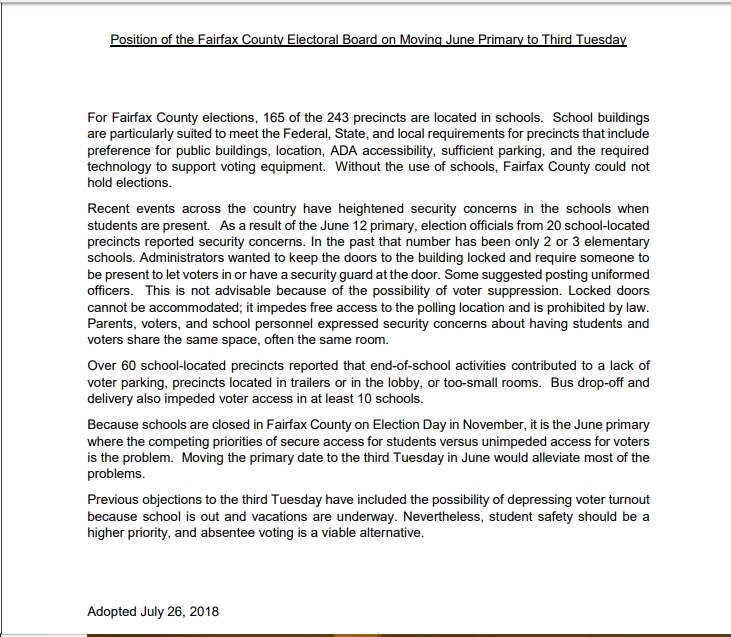